Micron Starts Construction of Its Third NAND Fab in Singapore

Micron this week broke ground on its new fab in Singapore that will be dedicated to manufacturing 3D NAND flash memory. Set to be completed late next year, Micron is not disclosing the production capacity of the new plant, only saying that its investments in the project are going to total billions of U.S. dollars. In addition, the company is disclosing its plans to expand its R&D activities in Singapore.

Micron already operates two 300-mm 3D NAND facilities in Singapore called Fab 10N and Fab 10X, which were built earlier this decade. These plants currently produce the lion’s share of Micron’s NAND flash memory.The new semiconductor production facility represents the third phase of Micron’s Fab 10 expansion and will be located adjacent to the existing complexes. The new plant will be built on a 165,000 m2 land plot at North Coast Drive. Just to put the number in context, the Fab 10N (the first module of the manufacturing complex) was built on a 200,000 m2 land plot, its cleanroom space was over 24,000 m2. Micron does not specify the size of the cleanroom space in the new facility for competitive reasons.

One of the things that Micron stresses is that the expansion of the fab does not necessarily mean that it will produce more wafers. The evolution of 3D NAND is a very complex process, but in a nutshell, to grow bit density, producers of flash need to increase the number of layers. As the number of layers grows, each wafer has to spend more time inside chemical vapor deposition (CVD) machines, then it takes longer to etch them and then various extravagant manufacturing techniques like string stacking lengthen manufacturing cycle even further. In a bid to maintain the number of wafers processed as then number of 3D NAND layers grows, flash memory producers have to add extra CVD and etching machines to cleanrooms, which requires extra space. Therefore, while fab expansions may not increase the number of wafer starts per month, they do enable growth in terms of produced NAND flash bits.

The first phase of the new facility is expected to be completed by the summer of 2019, Micron plans to get the first wafers from the new fab sometimes in Q4 2019. The ramp up of the facility is going to take several quarters, so expect significant volumes of 3D NAND memory to come out of the new fab towards the end of calendar 2020. 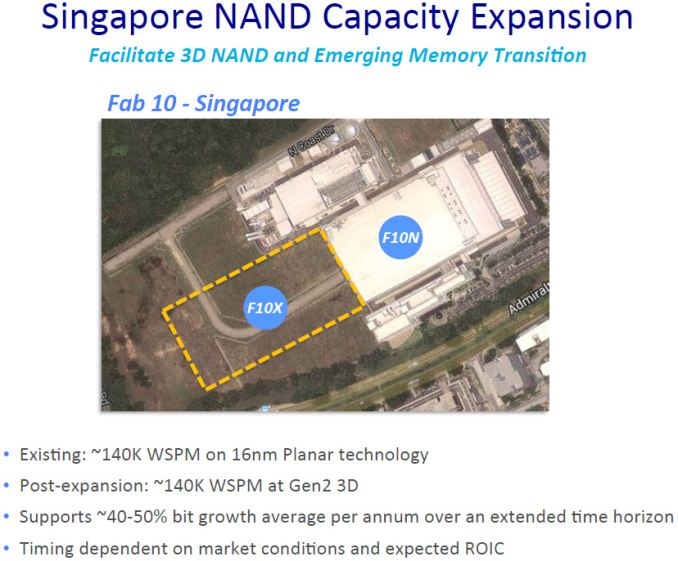 A slide from Micron's 2015 presentation

The manufacturer does not specify what kind of 3D NAND it plans to make at its new facility in Singapore, but given the timeframes involved, the timing is just about right for Micron to start production of their post-64 layer NAND. 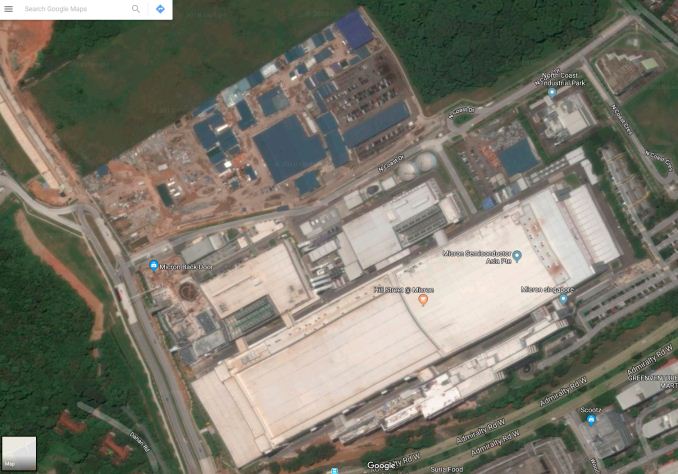 A satellite view of the Micron Semiconductor Asia location from Google Maps.

Sanjay Mehrotra, CEO of Micron, says that in addition to building a new fab, the company will also expand its R&D operations in Singapore. Among other, Micron will hire material scientists, electrical engineers, data scientists, and so on.

Micron does not disclose production capacity of the new phase of the Fab 10, but says that the new plant will require it to hire additional personnel to work at the fab and in the supply chain. At present, Micron’s headcount in Singapore is 7,500 people. The new plant and expansion of the R&D operations in the country will require Micron to hire an additional 1,000 of people.