Corsair’s latest upgrade of the SF series perfectly matches the size requirements of the SFX standards, measuring 125 × 63.5 × 100 mm / 4.92 × 2.5 × 3.94 in (W×L×D). Its chassis is sprayed with a matte black paint that is slightly resistant to fingermarks. The size of the chassis limited the designer to using a 92 mm fan, the grey blades of which create a subtle visual antithesis with the matte black chassis and glossy black finger guard. 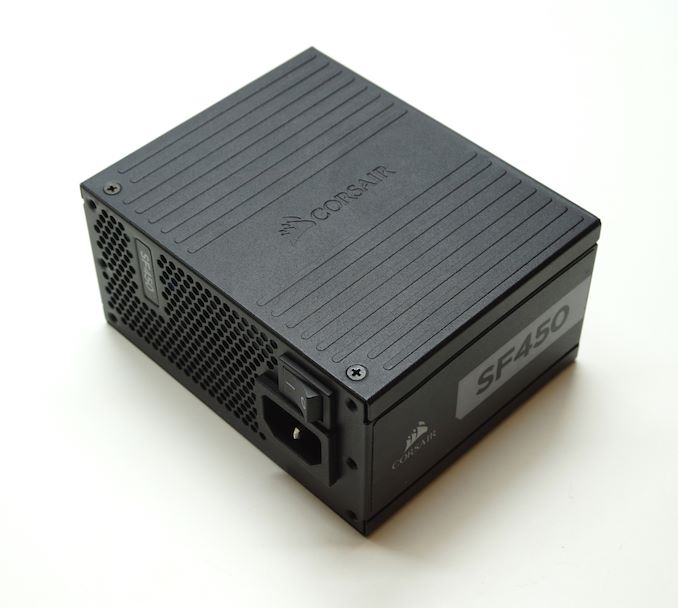 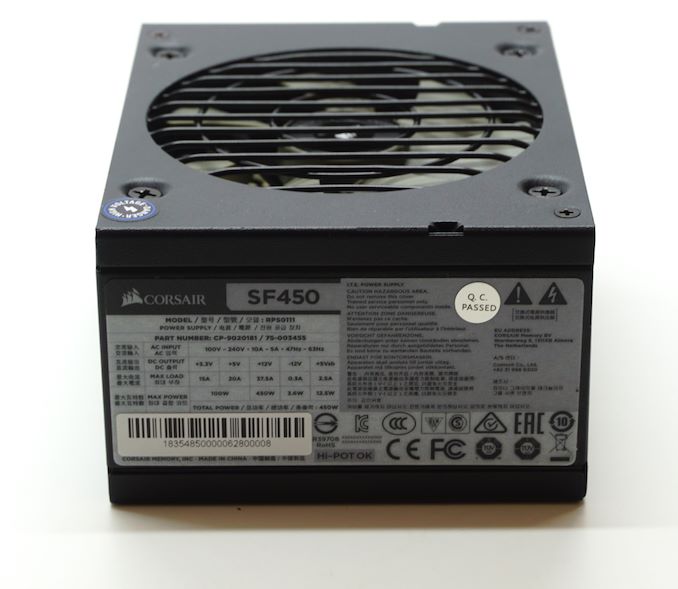 On the rear side of the Corsair SF450 PSU we can see an AC cable receptacle, a small switch, and a small label with the unit’s model number. The front side hosts the connectors for the modular cables and a very basic legend. Different cables use different connectors and cannot be mismatched. Note that PCIe and CPU 12V cables are using the same connectors on the PSU’s side. 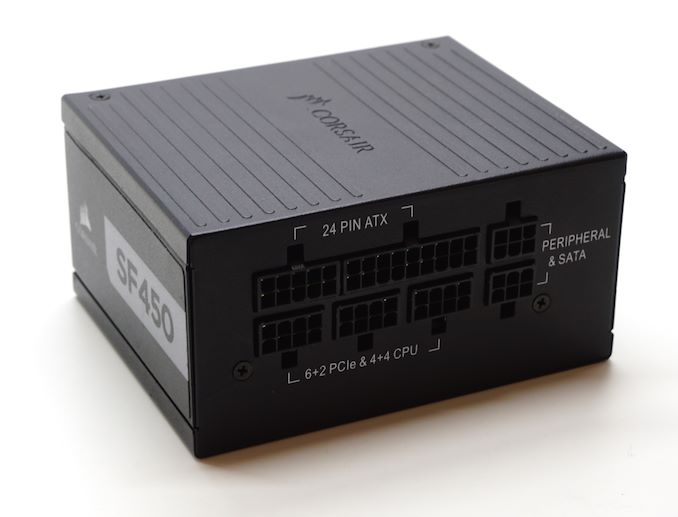 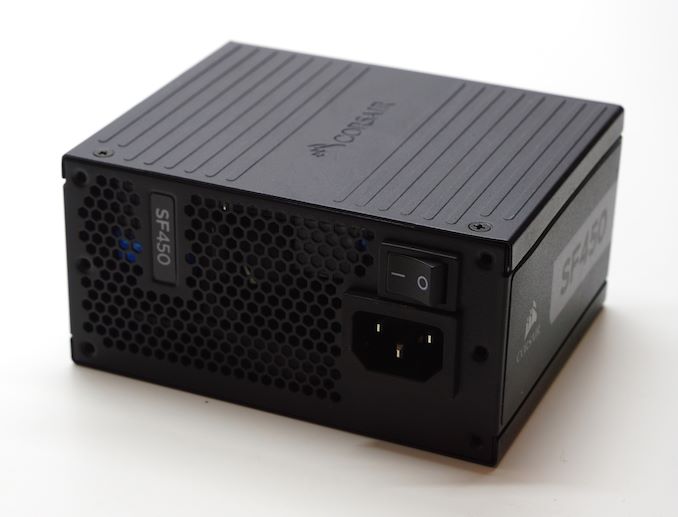 The 92 mm fan taking care of this PSU’s cooling needs is actually the same NR092L low-profile fan that Corsair has been using with the previous version of the series. According to its identification number, Corsair appears as the manufacturer of the fan, so haven't been able to determine who the OEM behind its creation really is. What we do know is that it has a rifle bearing engine and a maximum speed of 3950 RPM. Running anywhere near that speed would make the small 92 mm fan very loud but, as we will see in the following pages, the high efficiency of the PSU allows it to keep the fan’s speed low under normal operating conditions. 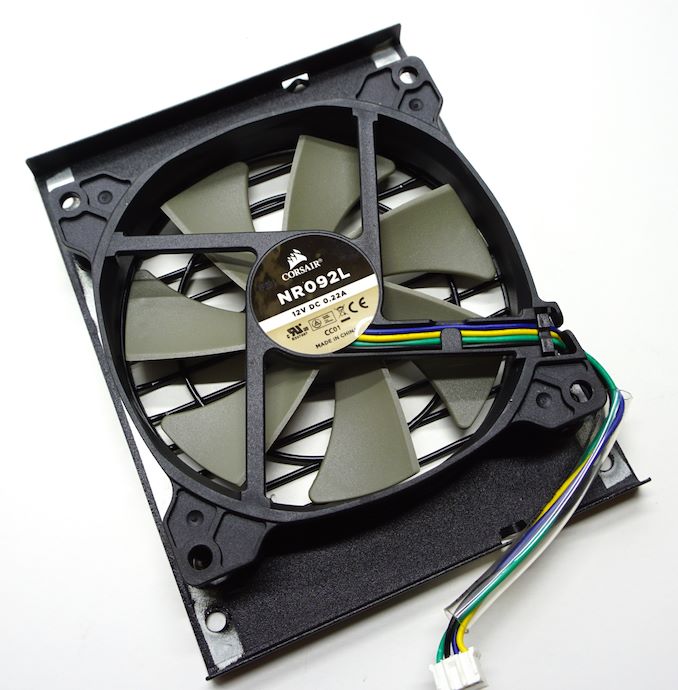 The OEM behind the new Corsair SF450 is none other than Great Wall, the Chinese company that nowadays is behind several high-performance designs. The platform appears to be the same as the one Corsair used for the original SF series, which were granted the 80Plus Gold efficiency certification. We do not have one of the older units at our disposal for a thorough comparison but, comparing it to the reference design images, it appears that Great Wall achieved the higher efficiency certification level by simply using newer and more efficient active components. If there are any layout/design changes, these should be minor. 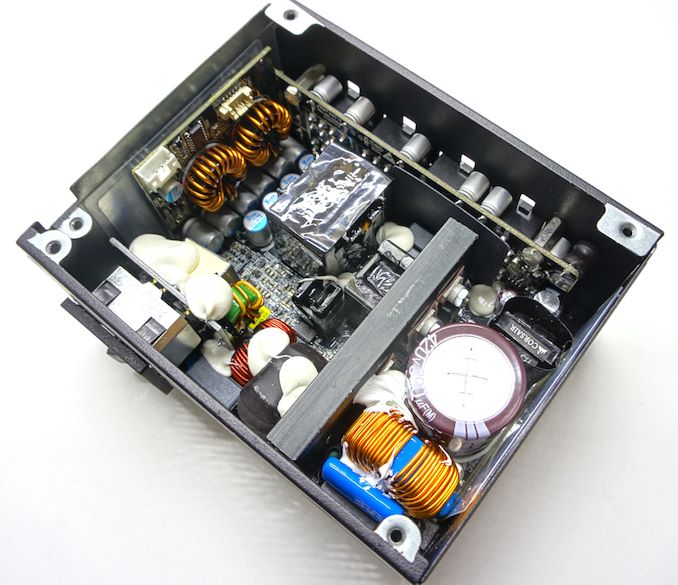 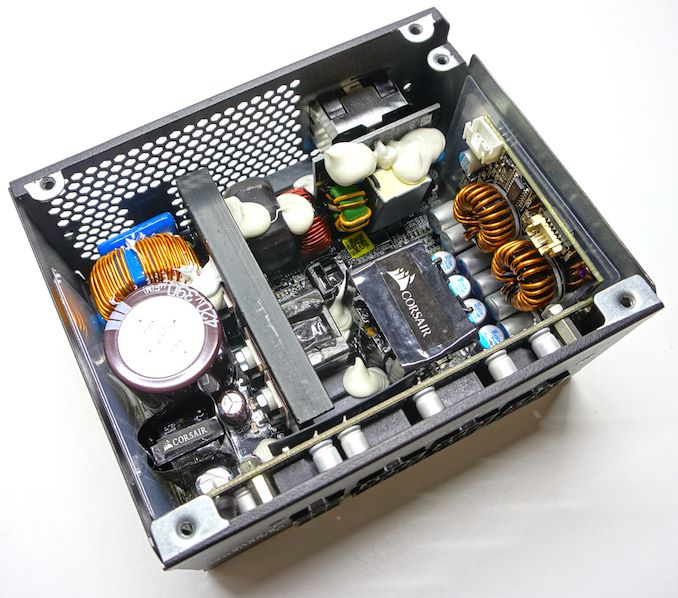 The filtering stage begins on the tiny PCB at the back of the AC receptacle and continues onto the main PCB, with a total of four Y capacitors, two X capacitors, and three filtering inductors. A very simple, straight heatsink holds the single rectification bridge, as well as the APFC and primary inversion circuit active components. The APFC circuitry consists of a single transistor and a diode that are paired with a comparatively very large coil and capacitor. The bulky 420V/390μF capacitor is supplied by Nippon Chemi-Con and is perhaps a bit too large for a 450W PSU. 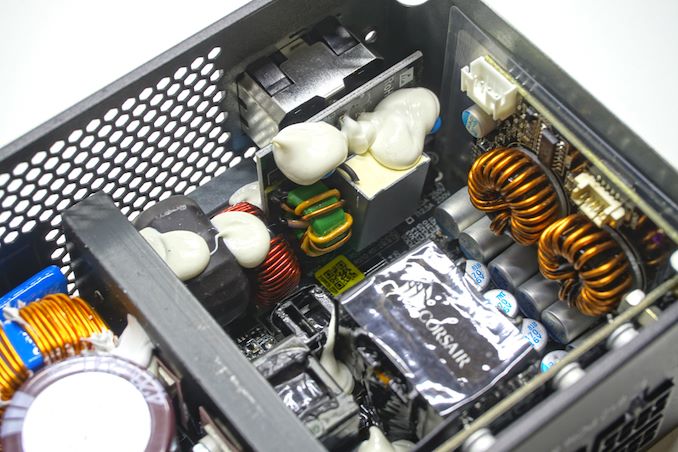 Despite the high efficiency certification of the Corsair SF450 PSU, the circuitry actually is relatively simple. The heart of the primary inversion stage are two MOSFETs that form a standard half-bridge LLC inverter. Four MOSFETs at the secondary side of the transformer generate the 12V line of the PSU and two DC-to-DC circuits on the vertical daughterboard generate the nowadays secondary 5V/3.3V lines. All of the secondary side capacitors, electrolytic and polymer alike, are supplied by Nippon Chemi-Con as well. 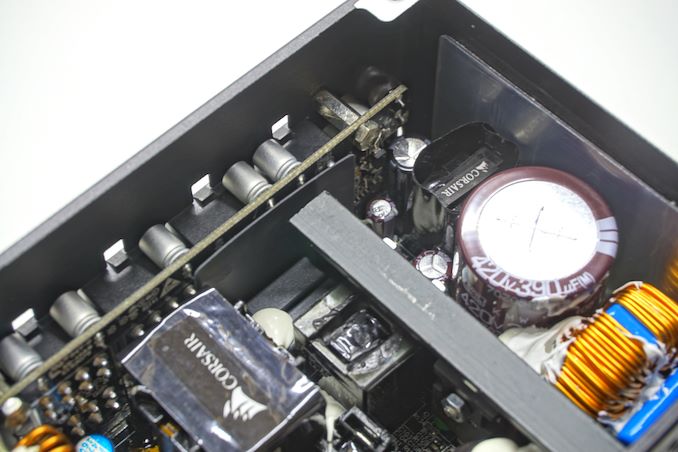