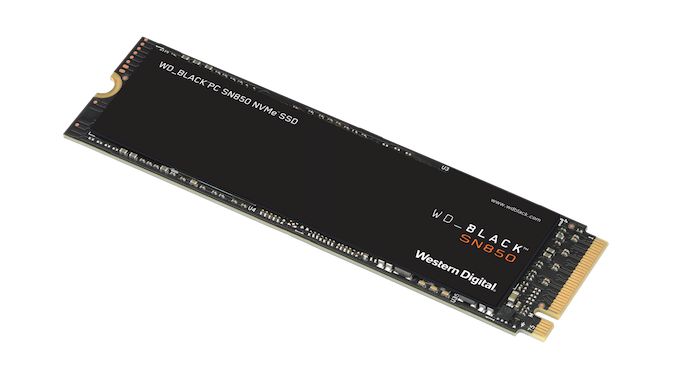 Western Digital has rapidly risen to being a top-tier player in the market, and this is no more evident than with their newest high-end SSD, the WD Black SN850.

Less than a year after acquiring SanDisk, Western Digital began applying its performance-oriented WD Black branding to SSDs, starting with its first consumer NVMe drive. WD/SanDisk was late entering the consumer NVMe SSD market and its first product was not high-end by the standards of the time. With the second attempt, they got serious and designed their own NVMe SSD controllers, following the same strategy of vertical integration that has worked so well for market leader Samsung. The in-house controller had none of the bugs or performance problems that have plagued the first-generation controllers from most companies. That second-generation WD Black (internally designated SN700) immediately made Western Digital a major player in this market segment, but didn't quite put them at the top: it competed against the Samsung 960 EVO rather than the 960 PRO.

Now after learning some very valuable lessons from the SN700 and its minor refresh SN750, WD is back with the WD Black SN850, the first real hardware upgrade to the Black product line in over two years. Introduced last fall as part of the informal second wave of consumer PCIe 4.0 SSDs, the WD Black SN850 is aimed at the true top of the market, and is designed to compete against the Samsung 980 PRO and a multitude of more recent arrivals mostly based around the Phison E18 SSD controller.

Western Digital doesn't give us detailed performance specifications the way Samsung does, but the basic specifications make it clear that this drive is aimed at the very top: sequential reads up to 7GB/s are pushing the limits of the PCIe 4.0 x4 interface that is still catching on in the consumer market, and random reads at 1M IOPS from a single M.2 drive were just a dream a year ago. Overall, these peak performance specs line up pretty well with the Samsung 980 PRO: Samsung quotes higher random write performance, and WD quotes slightly faster sequential writes.

To reach this level of performance, Western Digital has introduced the second generation of their in-house NVMe SSD controller design. We don't have details of how this controller differs from their first-generation design, but it's a safe bet that almost every part of the chip was substantially upgraded. Compared to the preceding WD Black SN750, the SN850 also benefits from an upgrade to the NAND flash memory, from 64-layer to 96-layer TLC. Western Digital's client OEM SSD product line had already adopted the 96L TLC with the PC SN730, but their retail consumer Gen 3 drives didn't get a matching refresh.

Our review sample is the 1TB WD Black SN850, the capacity with the highest performance specifications. Western Digital sells the SN850 as either a standard M.2 SSD, or as an M.2 SSD with a heatsink and RGB lighting; we're testing the cheaper plain version. The stylized heatsink and RGB lighting adds a lot to the price tag, and we found that both the earlier WD Black SN750 and the competing Samsung 980 PRO perform fine without extra cooling, so we expect the SN850 with the heatsink to be solely a cosmetic upgrade.

The Competition: SSD vs SSD

The most important competitors for the SN850 are other PCIe 4.0 M.2 SSDs. We have results for both the Samsung 980 PRO and the Silicon Power US70 based on the older Phison E16 controller. Our 980 PRO results are using newer firmware than our initial review of that drive, and we've added results for the 2TB model alongside our 1TB results.

Also of interest are two of the most premium SSDs from the PCIe 3.0 era: the 1.5TB Intel Optane SSD 905P and the Samsung 970 PRO. The 970 PRO was the last high-end consumer drive to use MLC NAND, which gave it a significant advantage on heavy, long-running storage workloads as compared with TLC SSDs that use SLC caching to provide improved peak performance. The 970 PRO is old enough that newer, faster TLC NAND is catching up even in tests where MLC used to be a major advantage—and of course the latest and greatest TLC drives with PCIe 4.0 have far higher peak performance.

On the PCIe 4.0 side, the Phison E18 controller is in a number of drives on the market as it was the first PCIe 4.0 NVMe controller to break cover in consumer-focused storage drives with better than PCIe 3.0 speed but not really testing the limits of PCIe 4.0 - plus it is known to be a toasty implementation. Due to a level of system maturity, to date we haven't tested an E18 drive, but our first Phison E18 SSD sample arrived yesterday. We're currently testing through it, especially with the latest firmware which fixes a few issues. That means that this review won't be able to declare an outright winner for the consumer SSD performance crown, but that's not a big deal. Just like when high-end SSDs were all bumping up against the limits of PCIe 3.0, small differences in benchmark scores between today's high-end PCIe 4.0 drives will not be noticeable during any normal real-world usage. These drives are already overkill for most purposes, and which one is technically the fastest is mostly a matter of bragging rights. Also on the market is the novel ADATA XPG Gammix S70 SSD with newcomer Innogrit's high-end SSD controller, which we have in hand but have not yet tested with the latest firmware. 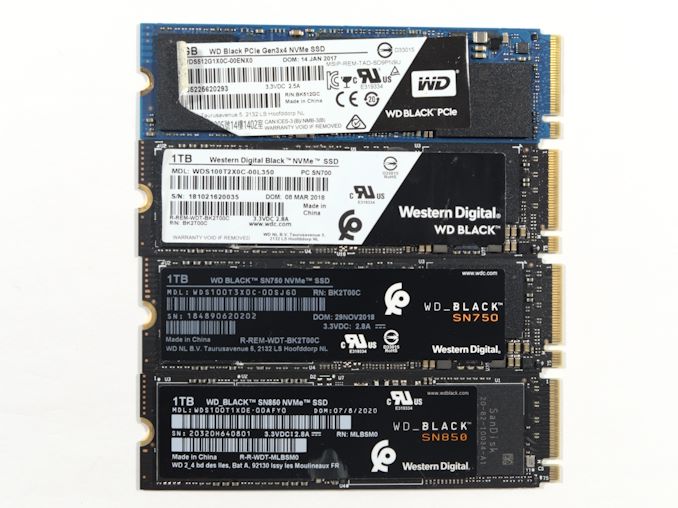 Representing the more mainstream parts of the consumer SSD market, we have several other Western Digital drives: the WD Black SN750 is the SN850's immediate predecessor, and the SN730 is the OEM counterpart with 96L NAND. The WD Blue SN550 is their second-generation entry-level NVMe SSD, and is one of the best DRAMless SSDs on the market. From other brands: The SK hynix Gold P31 is the current leader for power efficiency and provides performance that saturates its PCIe 3.0 interface. The Kingston KC2500 is one of the faster drives based around the popular Silicon Motion SM2262EN controller, and it uses the same 96L TLC as the SN850. The Intel SSD 670p is more of a low-end drive since it uses QLC NAND, but it's based on a very new generation of 3D NAND and a brand new controller from Silicon Motion which help it achieve great peak performance when using its SLC cache.

Read on over the next few pages for our full review of what ends up being a very speedy drive.