The Intel B560 Motherboard Overview: 30+ Budget Models Starting from $75 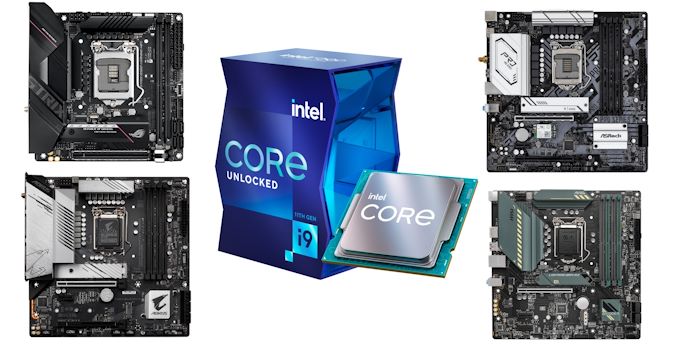 Intel is set to launch its latest generation of processors, known as Rocket Lake 11th Gen, on the 30th March 2021. We know Rocket Lake brings with it PCIe 4.0 directly from the CPU itself and is expected to bring better IPC performance over the last generation Comet Lake architecture. We've already taken a look at 50+ models on Intel's flagship Z590 chipset, which Rocket Lake works best with, but with the high prices, users who don't plan on overclocking the CPU have the option of the more value orientedB560 chipset. As an upgrade to the older B460 models, B560 brings some new features to the table including support for Wi-Fi 6, up to four USB 3.2 G2 ports, and it also supports memory overclocking as well.

In our B560 overview, we reached out to every motherboard vendor for a list of its B560 models, including images and specifications. We've compiled a list of all available B560 models at the time of writing, including pricing and updating the overview as more models are announced or made available at a later date.

Typically an unsung platform in terms of pure performance and focused on budget computing, Intel's B series chipsets tend to offer a more modest set of specifications with a lower overall cost. Compared to Intel's previous B460 chipset, Intel has made some refinements to its specifications to produce one of its best budget series chipsets in recent years. There are three or four (if you count PCIe Gen4)interesting new elements to the chipset, making it an interesting choice as technology and certain controllers become more affordable.

Intel's 500 series chipsets, including Z590 and B560, are set to be compatible with both 10th generation Comet Lake and 11th Generation Rocket Lake processors. The only platform that enables PCIe 4.0 will be a Rocket Lake processor at least at an i5 level, coupled with a Z590 or B560 motherboard. Alongside a full PCIe 4.0 x16 slot for graphics, one of the main benefits from PCIe 4.0, regardless of the 500-series motherboard model, is going to be had through storage. B560 will enable one PCIe 4.0 x4 M.2 slot from the CPU, with additional slots being PCIe 3.0 from the chipset. This sounds very identical to Z590, however the devil is in the details and our table below. 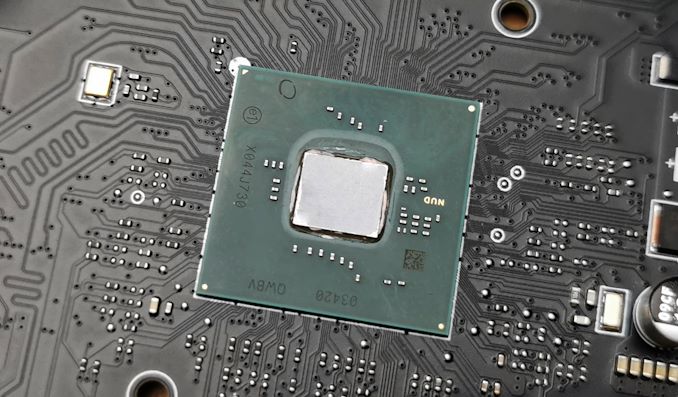 Moving from B460 to B560, one good improvement will be in memory support, with Intel making a move fromDDR4-2933 to DDR4-3200 (CML to RKL), which means vendors are building around DDR4-3200to meet official JEDEC specifications. Arguably this might not change much for most boards, given they seem to be built for beyond DDR4-3200 anyway, but Intel has re-enabled memory overclocking on B560. As a result, we're going to see motherboard vendors QVL for up to DDR4-5066 (on some models). Unfortunately, this is where overclocking ends. Users looking to overclock the processor will still need a Z590 motherboard.

The other noticeable improvement in B560 over B460 is native support for USB 3.2 G2 (10 Gbps), which was also introduced with Z590. Intel has allowed for up to four USB 3.2 G2 ports on B560, with some vendors even adjusting the connectors to implement USB 3.2 G2x2 Type-C connectivity. Vendors can also install up to six USB 3.2 G1 separately from the G2 connectivity, which makes for a more generous selection of premium input and output available to the end-user.

Intel's Rocket Lake processors bring 20 PCIe 4.0 lanes to the table, which in relation to B560, means 16 of these lanes will feed the top full-length PCIe slot, with the additional 4 being made available for M.2 storage. One of the main differences to Z590 will be that B560 has only 12 PCIe 3.0 lanes from the chipset. Vendors can use this PCIe bandwidth where they need it to go, with most vendors using four of these lanes generally going to a full-length slot where applicable. Taking these PCIe 3.0 x4 slots into consideration, mainly on ATX and some micro-ATX models, this leaves 8 PCIe 3.0 lanes available for storage, such as PCIe 3.0 x4 M.2 slots, as well as PCIe 3.0 x1 slots, and non-Intel networking or additional functionality. 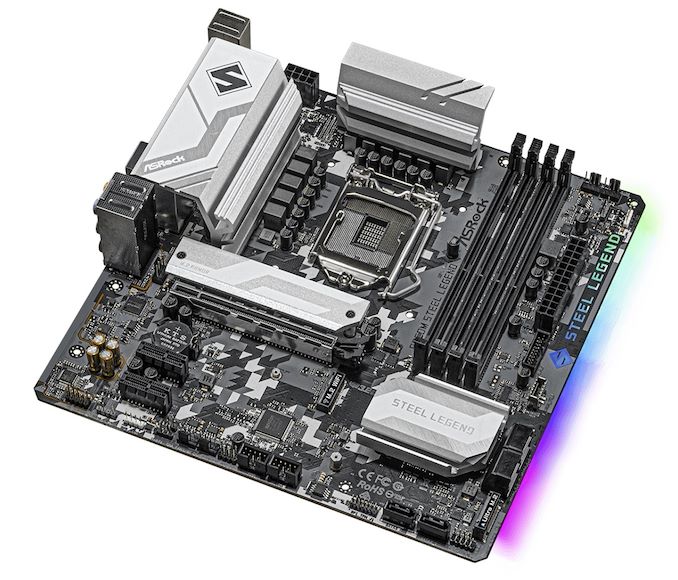 The last of the improvements come via Intel defined networking, with Intel including a Wi-Fi 6 CNVi for vendors to implement up-to-date networking controllers. This is a notable improvement over the B460 chipset, which required vendors to install its own interface thus taking available bandwidth away from other devices, and adding an extra cost to models. Some boards we have seen in this overview have even included Intel's latest AX210 Wi-Fi 6E wireless interface, with some opting for Wi-Fi 6, Wi-Fi 5,or none at all. The main fact is, the CNVi is there for vendors to now do as they wish, and it's a nice move from Intel, but does limit vendors to Intel Wi-Fi unless they want to use a PCIe model from a Broadcom or someone else.

From looking at what's available on B560 model-wise, there is a shift happening with vendors choosing 2.5 Gigabit ethernet over standard gigabit. Over the last couple of years, we've seen many chipsets adopted these 2.5 Gigabit Ethernet controllers, such as Intel's latest I225-V and the Realtek RTL8125, however it was quite rare. B560 brings this feature to more models, and it will mean some additional cost at the end of the day, which is being passed on to the end customer, but it's welcomed in the grand scheme of things.

The Current B560 Product Stack:

After reaching out to all of the vendors, we're expecting at least 37+ models to hit retail shelves, which could increase considerably with some models likely to be available in certain regions such as the Asian market. At the time of writing, we've seen models range from $75 up to $220, which is a good range for a budget board in the grand scheme of things. We've seen B-series models from both Intel and AMD come with more premium features in recent years, and the added cost with new controllers does eventually add up.

For the launch of Intel's Rocket Lake desktop processors, ASRock has a varied stack with various models catering to different market segments. Its Steel Legend series leads the pack with an ATX and micro-ATX sized pairing, with 2.5 GbE and three available M.2 slots on the larger B560 Steel Legendwith its Pro4 for professionals covering the majority of its B560 options, as well as the entry-level HDV series. 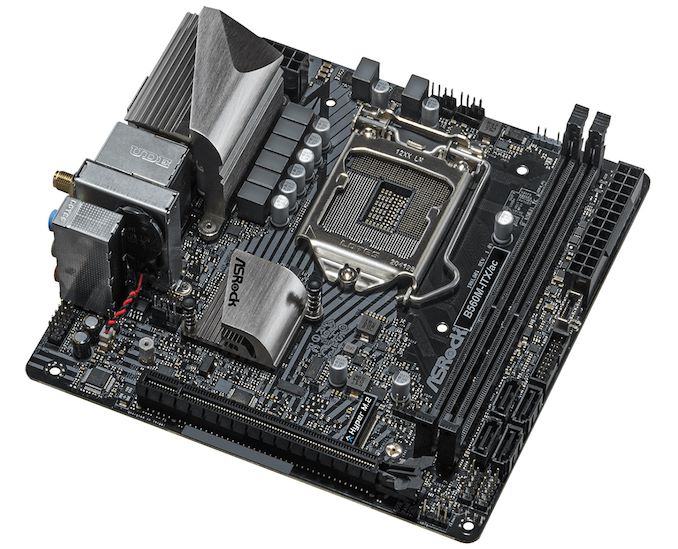 ASRock's only mini-ITX offering comes in the form of the B560M-ITX/ac, which has an MSRP of $95, making a small form factor system with Rocket Lake more affordable. Although none of the models listed at the time of writing include USB 3.2 G2x2 Type-C, ASRock opts for a 'cheaper' approach to B560, with solid features and affordability as its key strengths.

It wouldn't be an ASUS product stack without its key ranges making an appearance, including its alphabet ROG Strix models, the Prime series, and TUF Gaming ranges. The ROG Strix series brings premium features to what is commonly referred to as a mid-range chipset, with three ATX models, one micro-ATX, and one mini-ITX offering. All of the ROG Strix models include 2.5 Gb Ethernet as standard, with Intel's Wi-Fi 6 CNVi included, which ultimately makes them more expensive overall. 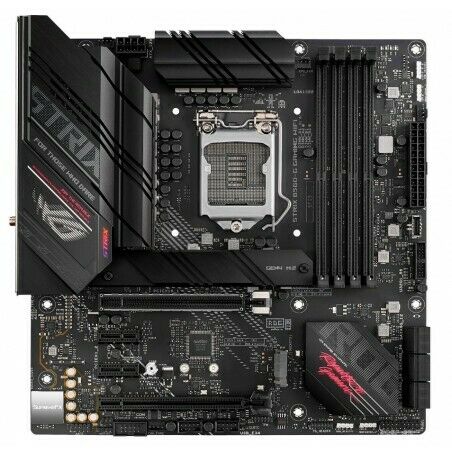 The ASUS Prime series focuses on more professional elements such as content creation and uses subtle aesthetics to great effect. The TUF Gaming series offers a competitive blend of gaming-focused features for entry-level gamers, with ATX, Micro-ATX, and non-Wi-Fi variants available depending on a user's specific needs.

Biostar has just one B560 model available to the market at the time of writing, the B560GTQ. This is micro-ATX, so fits in with most other B560 models (most are micro-ATX), with a different styling and alternative approach to aesthetics. Biostar has opted not to focus too much on memory support, offering up to DDR4-4000 officially, while other vendors breach beyond DDR4-5000 on most of its models. 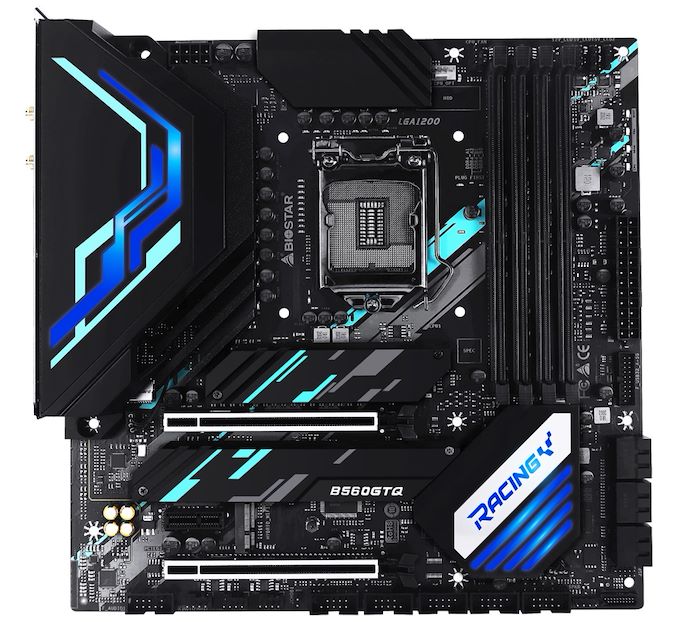 Biostar does include USB 3.2 G2x2 Type-C connectivity, so it's using Intel's available support, and has a better rear panel than most with 2.5 Gb Ethernet, and does provide fixings for users to install their own Wi-Fi interfaces.

As it stands at the time of writing, the GIGABYTE B560 stack is the smallest out of the big four vendors. The GIGABYTE B560 Aorus Pro AX stands as its B560 flagship, with 2.5 gigabit Ethernet, three M.2 slots, and Intel's Wi-Fi 6 CNVi. Other models making an appearance include the Aorus Elite on a micro-ATX sized frame, as well as a micro-ATX version of the Aorus Pro AX. 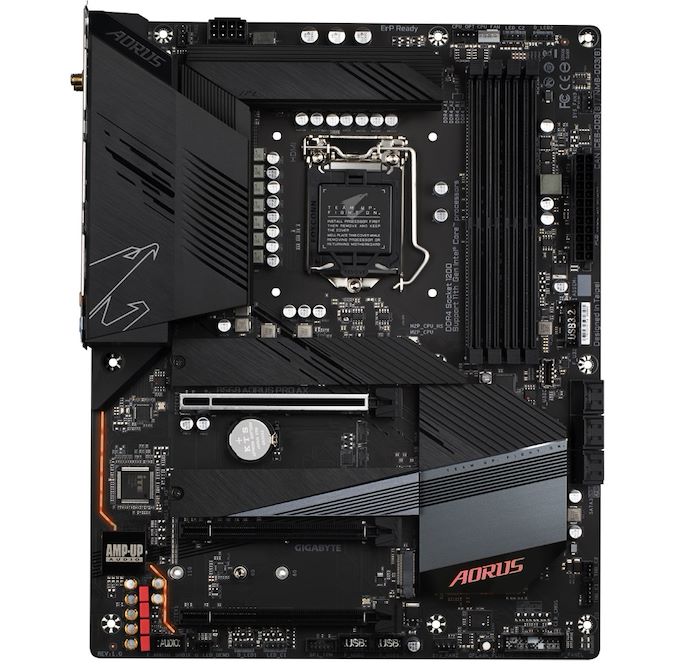 GIGABYTE's more affordable options include the DS3H and D3H models, which are all micro-ATX and come with very similar aesthetics. The only difference between the three DS models comes in small variances, including video output configuration and M.2 heatsinks. The most premium of the three is the B560M DS3H AC which includes an Intel Wi-Fi 5 CNVi.

Lastly, we have MSI's range of B560 models, which, as it stands, is a wide varied mix-up between its MAG (Arsenal Gaming) and Pro series models. There is one MPG (Performance Gaming) model, the mini-ITX sized MPG B560I Gaming Edge Wi-Fi, but MSI hasn't provided any details which point to either a later launch date or it just hasn't officially announced it at the time of writing. The Tomahawk series makes an appearance with an ATX sized model with plenty of features, including an Intel Wi-Fi 6E CNVi, 2.5 Gb Ethernet, and USB 3.2 G2x2 Type-C, which means it could be one of the best B560 boards around based on price to features at $189. 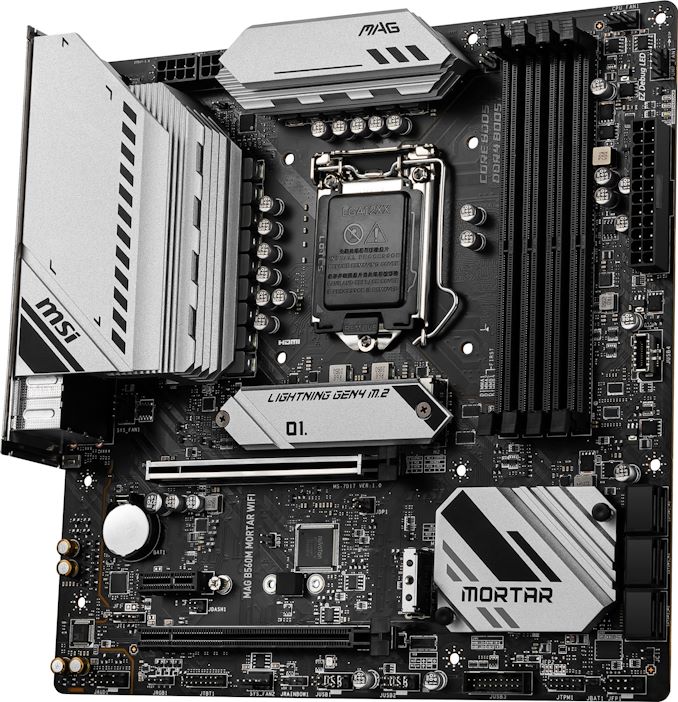 MSI also includes at least five Pro series models, with different levels of features and all on a micro-ATX sized PCB. These represent the entry-level B560 models with pricing starting from around $99 and ranging up to $149 for the more premium B560M Pro-VDH Wi-Fi model.

There is still plenty of time for vendors to announce and release even more models in the future, and we will endeavor to keep this B560 overview updated as regularly as possible. Each subsequent page includes a brief analysis of eachB560 model we have information on (at the time of writing), culminating with a conclusion of board features versus other models.