Yesterday, Microsoft launched the Internet Explorer 9 Platform Preview at MIX10. Though the current release of the platform preview is very rough around the edges, it promises to bring Internet Explorer into full web standards compliance, partially erasing the web-standard scourge that IE 6 still scandalizes on the internet. Some of the biggest applause-drawing moments happened when IE team members themselves mentioned how important rapid migration away from IE 6 is. What that means is W3C compliance is a very real and important goal, including complete support for HTML5, CSS3, SVG, XHTML, and H.264/MPEG4 HTML5 <video> playback. At the same time, Microsoft hopes to gain valuable insight from web developers about what direction the IE team should take.

But some of the strongest focus of the IE9 platform preview is targeted towards raising the so-called "glass ceiling" on web browsing performance. Microsoft hopes to drive that performance cap higher half through GPU-acceleration for rendering 2D, 3D, and HTML <video> content, and the other half through an entirely new multithreaded JavaScript engine codenamed "Chakra."

Microsoft provided a number of slides comparing JavaScript performance of IE 9 in its current preview, and claims it's at party with Firefox 3.6 and nearly as good as Chrome 4.0.249.89 (stable) tested with SunSpider 0.9: 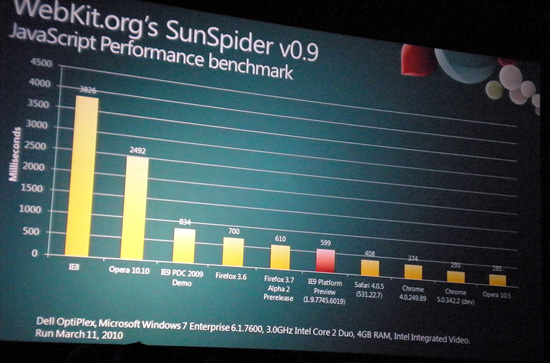 I initially attempted to validate and reproduce these results on my Latitude XT, and saw something very strange:

I ran and re-ran the test several times; for whatever reason, IE 9 Platform Preview doesn't like my Latitude XT running Windows 7 with a Core 2 Duo U7600 with 3 GB of RAM. Puzzled by the discrepancy, I ran the same tests on another computer running Windows Server 2008 R2 with a Celeron E3400 2.6 GHz with 4 GB of RAM. This CPU is essentially a Core 2 Duo with just 1 MB of L2 cache.

The results were much better:

I realize there's a slight discrepancy between the builds of Chrome on each test bed, however the JavaScript engine itself remains relatively unchanged; performance is on a nearly identical level. Obviously, something on the notebook hinders IE 9's performance dramatically.

Another interesting benchmark we considered was how well IE 9's codename "Chakra" JavaScript engine scales per thread. I was in the process of firing up IE 9 platform preview again to evaluate SunSpider results with different processor affinities toggled, when I was greeted with this: 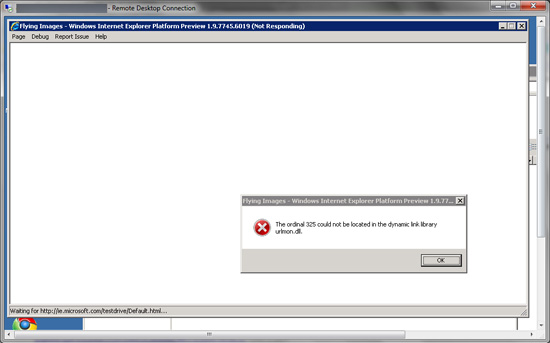 Considering how early of a preview this is, it's completely understandable that not everything is working properly across every system configuration. I've submitted feedback and a bug report, and plan on continuing to investigate the discrepancy.

It's important to note that IE9 in its current form isn't really a beta, it's somewhere between an alpha and a beta. Microsoft describes this release as "just enough of a slice of the browser" to both let web developers and designers try the new rendering engine, flesh out what HTML5 markup is most favored, and start to get feedback flowing. There's nothing in the way of a back button, tabs, address bar, or favorites. It's just a barebones Trident-wrapper that gives a relatively complete perspective on the direction Microsoft hopes to take IE. They promise to adhere to a strict eight-week schedule for updating the platform with improvements, addressing issues at each step, and increasing their Acid3 score every step of the way. More on that later.

But enough with that, let's take a look at it by loading anandtech.com: 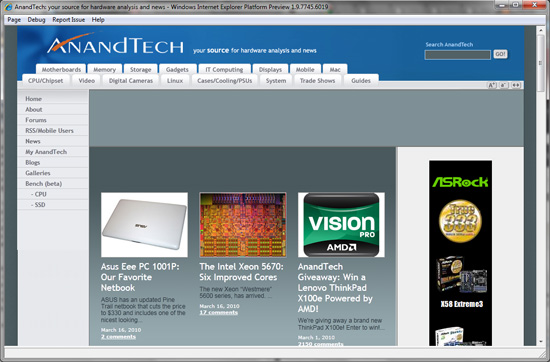 It throws an error about scripts; again, there are bound to be problems given the massive rewrite of the JavaScript engine, but otherwise it seems to run. Other than that, yeah, the UI exactly what you see: totally bare-bones. Control-O for opening an address, and F10 for home will get a lot of use if you decide to try this preview out. As mentioned earlier, there's no back button or keyboard shortcut for it at all.