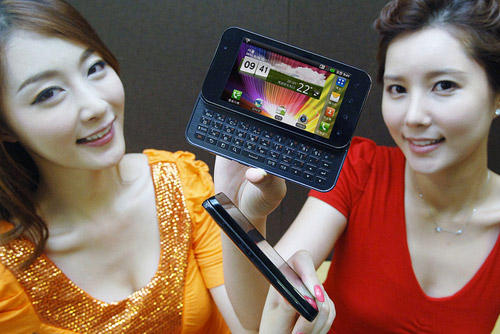 Keyboards and Android have had an on again/off again relationship since the G1. LG's looking to get involved in the affair with the LG Optimus Q2. Announced today for Korean markets as a follow-up to the Korea only Optimus Q, the Q2 brings NVIDIA's Tegra 2 refresh the Tegra 250 3D running its A9 cores at 1.2 GHz and its GPU at 400 MHz 30% higher than previously, a decent spec bump over the Tegra 2 devices that have come before it (Ed. note: NVIDIA tipped us off that the updated chip has no distinct model number and declined to confirm the GPU clockspeed, merely confirming that it is 30% faster. So with the normal clock at 333 MHz, and there being a 30% increase . . . well, you can do the math). The four row QWERTY keyboard and brushed aluminum body look quite stylish, and paired with a 4" WVGA IPS display that's reported to sport a blinding 700 nits of brightness. The previous Q was TD-SCDMA only, but a recent report from Electronista points to an upcoming Sprint phone that will go by the name Q, so this Korean star might make it to our shores after all. We're reaching out to LG in hopes of some good news.