With each new operating system in recent history, Microsoft has promised better battery life. We tested this back in the early days of Windows 7 and found that while Vista was generally a step back relative to XP, Windows 7 fixed much of what was wrong and even managed to beat XP in several tests. With the Windows 8 Consumer Preview now available, we thought we’d run a quick test on a laptop to see if things have changed much. Let’s just get this out of the way, shall we? 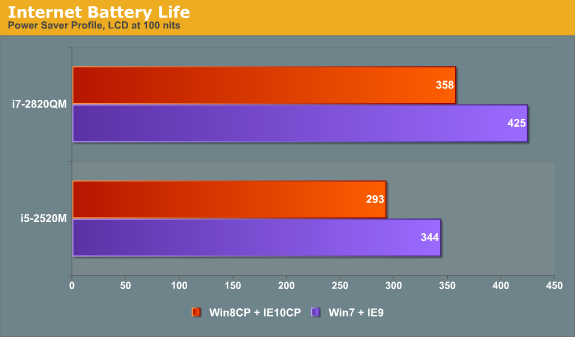 Okay, that’s a pretty poor showing, but what’s really going on here? We’re using the same Sandy Bridge laptop that we tested back when Sandy Bridge first launched, a Compal manufactured unit with an i7-2820QM processor, 4GB RAM, and an Intel 160GB G2 SSD. So the hardware hasn’t changed, but battery life is much worse right now—and that last part is important: right now. We did a few tests of battery life with the Windows 7 preview and it didn’t look that great, but drivers and optimizations weren’t finalized, and Windows 8 CP is definitely in that same category. But there’s more to the story than just Windows 8.

As part of the Windows 8 CP experience, we’re also given the privilege of running the Internet Explorer 10 Consumer Preview (IE10CP). As we’ve noted in the past, the choice of browser can certainly have an impact on battery life, and that likely goes double when we’re looking at beta software for the OS and browser. I also performed an in-place upgrade from Windows 7, so it’s possible that could negatively impact battery life as well.

I've only had a chance to run the battery drain test once so far, so consider the above results very preliminary. I'm going to test it again, as well as go back and retest with Windows 7 (and IE9) to see if there are any other changes. The battery may not be performing as well as it did last year (though it seems to be fine based on HWmonitor reporting 2% wear level), but we'll hold off on any final verdicts for now. While I continue to look into battery life over the next few days to see if perhaps I missed something, it doesn’t look like Win8 CP with IE10 CP is going to do anyone any favors in terms of accessing the Internet while unplugged.

Update: In case you need further explanation, the results above are simply a first test of battery life using IE10 CP. I reran the test a second time and it improved slightly (263 vs. 250 minutes), but I'm still testing. There is also a newer Intel driver that I've now installed, which may help quite a bit for IE10. The above results do not say anything about idle battery life, battery life using Metro apps, battery life during video playback, etc. I am working on testing those items as well, and I have a second laptop that I'll be using to provide additional results. All we can say right now is that after first installing Win8 CP via an upgrade to Win7 and when using IE10 with Flash enabled, battery life looks poor—like, Safari browser on Windows levels of poor. That can and very likely will change before the final release, and the fixes will likely come in the way of driver updates as well as improvements to the browser.

Update #2: I've added results from a second laptop where I have done a clean install of Windows 8 CP. This time the laptop is the ASUS K53E with an i5-2520M processor. I did retest with Windows 7 running Internet Explorer 9 first, and I also swapped out the hard drive for a 64GB Kingston SSDNow V100. Results are much better than with the first laptop, but there are a few remaining elements I need to test. Again, consider all these results preliminary, but at least it does appear that Windows 8 with IE10 battery life may not be quite as bad as my initial results indicate. (Note also that using IE9 in place of IE8 actually improved battery life with the K53E and the V100 SSD—Win7 with IE8 scored 333 minutes. I'm not sure if that will always be the case, however, as I seem to recall seeing IE8 get better battery life on at least one laptop I tested.)

Things still waiting to be tested: first, I haven't finished retesting the i7-2820QM with the latest Intel HD Graphics driver [Update #3: the new driver did not change the result], second I need to retest it after doing a clean install of Windows 8 rather than an upgrade, and third I need to retest with Windows 7. [Update #4: I did a clean install of Windows 7 on the i7-2820QM and reran the Internet test twice. The first result was 393 while the second was 425, so other than variance between runs (possibly the fresh install somehow played a factor on the first run), it doesn't look like battery quality has deteriorated. The graph has been updated with the latest numbers.] I'll hold off on reporting idle/video/alternate browser battery life for a future article.

Final Update: After running numerous other tests in Windows 7 just to verify the numbers we had there (and in the process of working to put together graphs for a larger article), I started with a clean install of Windows 7, finished the benchmarks, and then did an upgrade to Windows 8. This time, the battery life is much better--358 minutes compared to 263 minutes from the original upgrade. It's likely that the original upgrade had a lot more stuff left over that somehow impacted battery life. Now, the numbers are much more in alignment with the results of the K53E laptop. We'll have full details on several battery life test scenarios in a future article, but there's still a drop in battery life right now of around 15-17%, mostly likely because of differences between IE9 and IE10CP.

And just as an aside, I know that Windows 8 isn’t final by any stretch of the imagination, but while the Metro UI (and UI changes in general) seems like it would work great on a tablet, I’m ready to go on record as saying I think it sucks for traditional desktop and laptop users. Without a touch interface, Metro feels weird at best and downright awful at worst. What’s more, getting a touchscreen for a desktop or laptop isn’t actually something I’m clamoring for. Does using a 24” or 30” touchscreen on my desktop sound enjoyable? Not at all, and a 15” laptop touchscreen wouldn’t be much better. Maybe it would help me build up a bit of arm strength, but that’s about the only upside. Add on fingerprints—a personal pet peeve that smartphones and tablets still suffer from—and I’m more than happy to stick with the “boring” old Start Menu. That’s just my initial impression of course; anyone else have similar—or different—feelings after playing around with the Win8 CP?