The proAptiv family of processors can contain 1 to 6 proAptiv cores, each of which implements in about half the size of a standard Cortex-A15 core. This is not entirely impossible, given that some people in the industry feel that ARM's Cortex-A15 implementation takes up too much area for the advertised performance. However, it is likely that the NEON engine is being accounted for in the Cortex-A15 area while the proAptiv implementation doesn't take into account the 32 bit SIMD engine (DSP ASE). [ Update: MIPS clarified that the DSP ASE is not a configurable block and is included in the quoted area. The precise area numbers for ARM are estimates only, since ARM has published no concrete specifications for the Cortex-A15. MIPS also attempted to remove the estimated area for NEON, with the desire to achieve as close to an “apples to apples” comparison in area as possible].

The proAptiv core is a superscalar out-of-order CPU with quad instruction fetch and fused triple dispatch. In the absence of any dependencies, the CPU can issue up to four integer and two floating point operations. Multi-level TLBs and branch target buffers / sophisticated branch prediction aid in getting more than 60% better performance over the previous generation 1074K series. The FPU is dual issue and runs at the same speed as the CPU. 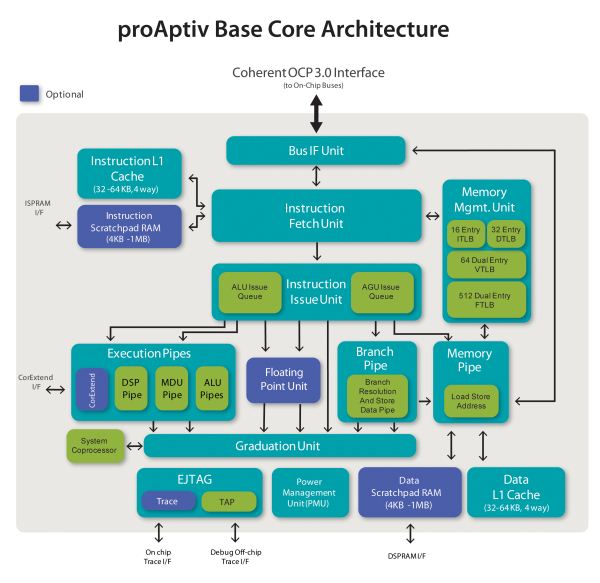 The proAptiv and interAptiv families implement EVA (Extended Virtual Addressing) in order to better utilize the available address space. Similar to the Cortex-A15, the IP includes a coherence manager and an integrated L2 cache controller with ECC support. While Cortex-A15 supports up to 32 cores, the proAptiv family supports up to 6. An interesting aspect of the Coherent Processing System (CPS) is the presence of a cluster power controller which does clock gating per core (common in other multi-core CPUs also) and voltage domain / gating per core. The latter has interesting applications in scenarios similar to ARM's big:LITTLE architecture. Instead of tying up a big core such as the A15 with a smaller one like the A7, MIPS suggests that licensees could implement a multi-core proAptiv system with some cores running at much lower frequencies / lower voltage to save upon power (since the proAptiv cores are already small compared to the A15 core). 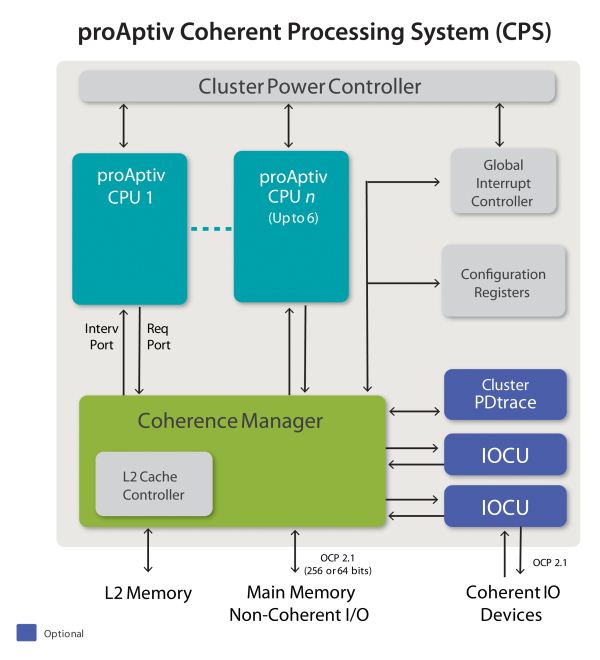 While ARM expects the A15 to reach up to 2.5 GHz in the HP/G processes, MIPS only expects up to 1.5 GHz. That said, embedded applications using the proAptiv are likely to be power sensitive, and while peak performance of the A15 is likely to be much better than the proAptiv family, MIPS can tout the smaller size for equivalent performance as an advantage.

*Update: MIPS supplied detailed feedback on our architecture comparison, and I will leave it here for readers to take note: