Fusion Drive: Under the Hood

I took the 27-inch iMac out of the box and immediately went to work on Fusion Drive testing. I started filling the drive with a 128KB sequential write pass (queue depth of 1). Using iStat Menus 4 to actively monitor the state of both drives I noticed that only the SSD was receiving this initial write pass. The SSD was being written to at 322MB/s with no activity on the HDD. 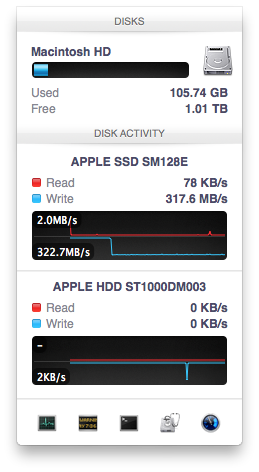 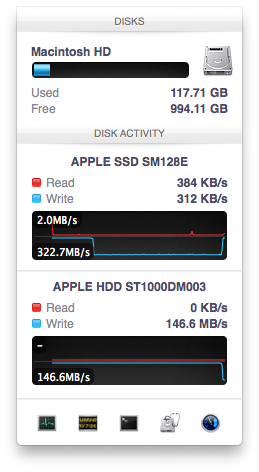 The initial test just confirmed that Fusion Drive is indeed spanning the capacity of both drives. The first 117GB ended up on the SSD and the remaining 1TB of writes went directly to the HDD. It also gave me the first indication of priority: Fusion Drive will try to write to the SSD first, assuming there's sufficient free space (more on this later).

Next up, I wanted to test random IO as this is ultimately where SSDs trump hard drives in performance and typically where SSD caching or hybrid hard drives fall short. I first tried the worst case scenario, a random write test that would span all logical block addresses. Given that the total capacity of the Fusion Drive is 1.1TB, how this test was handled would tell me a lot about how Apple maps LBAs (Logical Block Addresses) between the two drives.

The results were interesting and not unexpected. Both the SSD and HDD saw write activity, with more IOs obviously hitting the hard drive (which consumes a larger percentage of all available LBAs). The average 4KB (QD16) random write performance was around 0.51MB/s, it was constrained by the hard drive portion of the Fusion Drive setup.

After stopping the random write task however, there was immediate moving of data between the HDD and SSD. Since the LBAs were chosen at random, it's possible that some (identical or just spatially similar) addresses were picked more than once and those blocks were immediately marked for promotion to the SSD. This was my first experience with the Fusion Drive actively moving data between drives.

A full span random write test is a bit unfair for a consumer SSD, much less a hybrid SSD/HDD setup with roughly an 1:8 ratio of LBAs. To get an idea of how good Fusion Drive is at dealing with random IO I constrained the random write test to the first 8GB of LBAs. 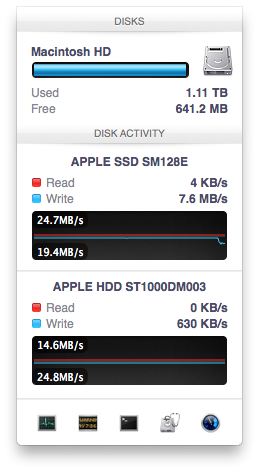 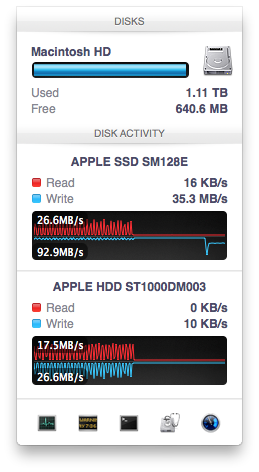 In the shot to the left, most random writes are hitting the SSD but some are still going to the HDD, after some moving of data and remapping of LBAs nearly all random writes go to the SSD and performance is much higher

On the third attempt, nearly all random writes went to the SSD with performance peaking at 98MB/s and dropping to a minimum of 35MB/s as the SSD got more fragmented. This told me that Apple seems to dynamically map LBAs to the SSD based on frequency of access, a very pro-active approach to ensuring high performance. Ultimately this is a big difference between standard SSD caches and what Fusion Drive appears to be doing. Most SSD caches seem to work based on frequency of read access, whereas Fusion Drive appears to (at least partially) take into account what LBAs are frequently targeted for writes and mapping those to the SSD. 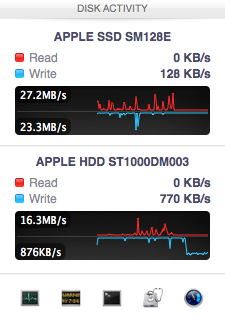 Note that subsequent random write tests produced very different results. As I filled up the Fusion Drive with more data and applications (~80% full of real data and applications), I never saw random write performance reach these levels again. After each run I'd see short periods where data would move around, but random IO hit the Fusion Drive in around an 7:1 ratio of HDD to SSD accesses. Given the capacity difference between the drives, this ratio makes a lot of sense. If you have a workload that is composed of a lot of random writes that span all available space, Fusion Drive isn't for you. Given that most such workloads are confined to the enterprise space, that shouldn't really be a concern here.