We’ll start off with our “Value” settings, which consist of 1366x768 resolution and roughly Medium detail settings in the tested titles. This represents the sort of settings you’d be likely to use on an iGPU like the HD 7660G or Intel’s HD 4000 (maybe—HD 4600 is possibly a better bet) to get a reasonable >30 FPS out of most titles. Several of the games we’re using now are quite demanding, however, so iGPUs may not be able to provide an acceptable experience unless you really turn down the details and resolution. Here’s what performance looks like: 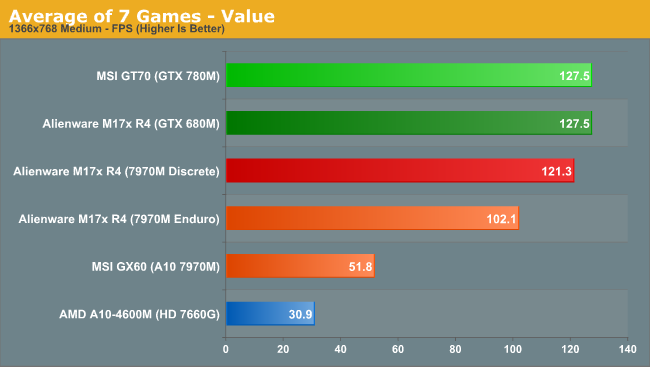 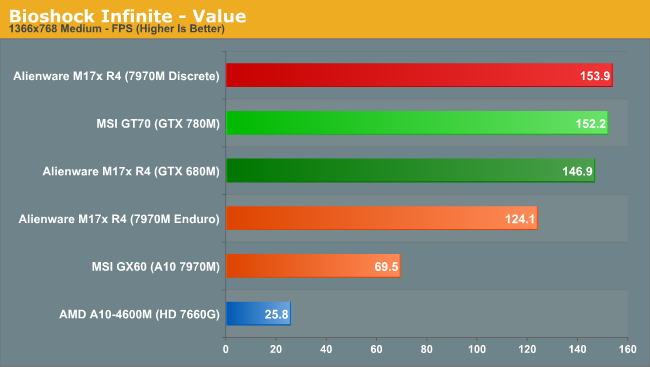 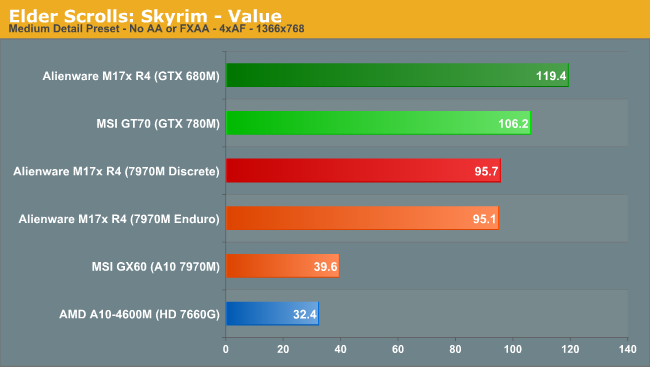 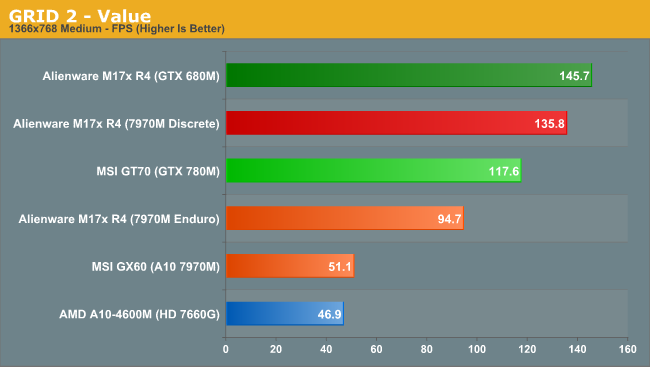 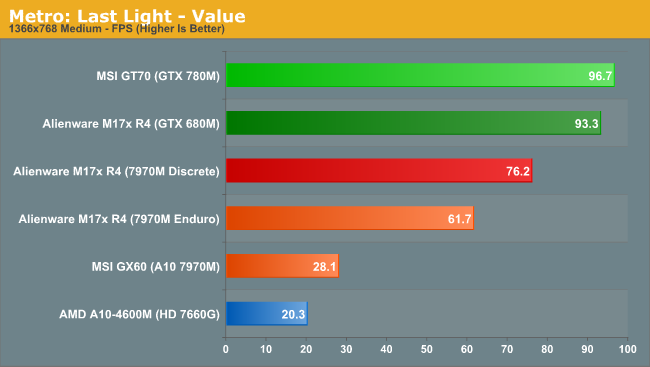 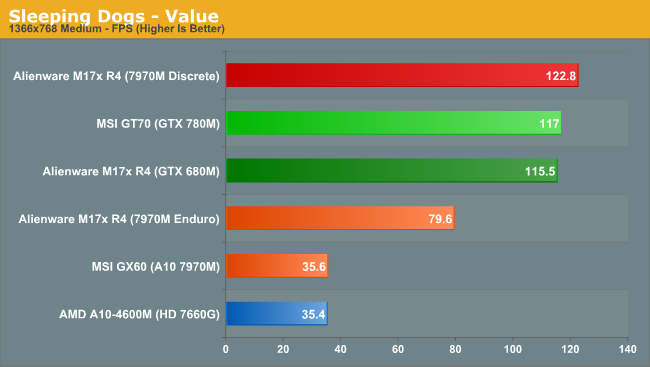 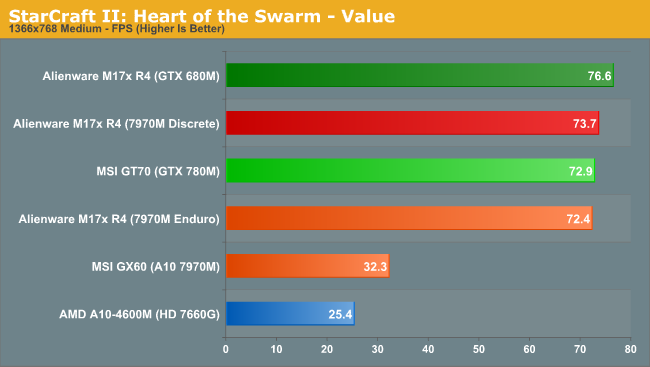 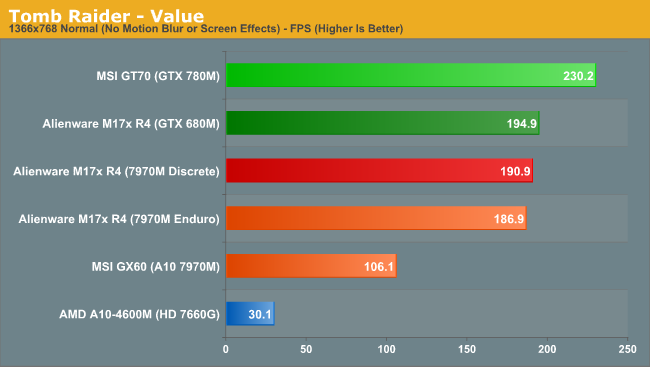 When the HD 7970M first hit notebooks over a year ago, the performance potential seemed lacking compared to the actual hardware. Based on the desktop Pitcairn core, HD 7970M should provide roughly the same performance as the desktop HD 7870 (it’s clocked 15% lower than 7870 on the core, though, so it’s closer to the HD 7850 and GTX 660). The reality is that where the HD 7850 typically competes well against NVIDIA’s desktop GTX 660, on laptops the GTX 680M often blasted the HD 7970M at launch. Many pointed to Enduro as a primary culprit, and while the situation has improved over the past 12 months, even now we can still see a periodic performance deficit from Enduro.

Going over the specifics, on the M17x R4 the discrete mode 7970M ends up being 24% faster in Bioshock, tied in Skyrim, 43% faster in GRID 2, 24% faster in Metro, 54% faster in Sleeping Dogs, tied in StarCraft II, and tied in Tomb Raider. The deficit largely exists in situations where you’re getting >60 FPS, e.g. at lower detail settings and a lower resolution, but that’s obviously not the only factor as Tomb Raider basically elicits no penalty and yet runs at over 180 FPS. While I don’t have the ability to do comparable testing with NVIDIA’s Optimus, I know at one point there were instances where Optimus was slower, but those issues have largely been fixed as far as I can tell. On AMD’s Enduro, that’s clearly not the case with the latest beta drivers.

Incidentally, the bandwidth used to shuttle frames over to the system RAM for display by the iGPU shouldn’t be a limiting factor. Consider as an extreme example a simple graphics benchmark like 3DMark03, where the Wings of Fury test can easily hit >500 FPS at 1366x768. That works out to roughly 2GBps of bandwidth over the PCIe bus, but an x16 slot offers far more bandwidth than that so 2GBps to transfer fames to system RAM shouldn’t present a problem. With the resolutions and frame rates we’re looking at here (a maximum of 1366x768 at <200 FPS), transferring the frames to system RAM uses just 840MBps, so that shouldn’t be a bottleneck.

Moving on to the Intel i7 vs. AMD A10 match up, things are actually worse. We can’t disable Enduro on the GX60, so we’ll just compare Enduro scores for the GX60 and M17x. The Intel platform in this case comes out 79% faster in Bioshock, 140% faster in Skyrim, 85% faster in GRID 2, 120% faster in Metro, 124% faster in Sleeping Dogs, 124% faster in StarCraft II, and 76% faster in Tomb Raider. On average, that works out to a margin of victory of 97%—basically twice as fast. Also of note is that on the GX60, the 7970M is only outperforming the integrated 7660G by 67% on average, so clearly there are other bottlenecks coming into play.

Figuring it was possible the single fan cooling setup in the GX60 is preventing the APU from hitting higher Turbo Core speeds, I logged the various clock speeds using HWiNFO64 and ran through the Bioshock Infinite and Skyrim (extended duration) benchmarks. Maximum CPU clocks reported throughout testing were at a steady 2.7GHz; the APU definitely didn’t hit maximum Turbo Core, but that's only for single-threaded workloads and the 2.7GHz clock is for two or more threads; regardless, it’s not running at the base 2.3GHz, so Turbo or throttling isn't the problem. Similarly, APU temperatures remained below 70C throughout testing, so cooling isn’t limiting performance either. Richland is supposed to be better about hitting its maximum turbo speeds, so potentially that alone could enable it to be 10-15% faster in games like Skyrim and StarCraft II, but the 2-thread turbo speed of Richland is probably similar to Trinity so the gain could prove to be less than 5%. GPU utilization of the HD 7970M during these tests was also rather low at around 35-55%, which isn’t all that uncommon at lower detail settings when the GPU isn’t being pushed hard. Whatever the cause, the fact is that at medium detail settings in most games, the A10-4600M (possibly in combination with Enduro) appears to be a bottleneck on the HD 7970M’s performance.

Wrapping up our look at the Value/Medium settings, if we compare NVIDIA vs. AMD there’s not a lot to say. At these settings, the 680M, 7970M, and 780M are basically taking a siesta. On average, the 680M ends up 5% faster than the best 7970M result and the 780M is tied with the 680M. Looking at individual game results there’s a bit more variation, however. Against the 680M, the 7970M (discrete mode) is generally quite close, with AMD getting minor victories in Bioshock and Sleeping Dogs; minor losses in GRID 2, StarCraft II, and Tomb Raider; and larger 20-25% losses in Skyrim and Metro. The GTX 780M numbers aren't too meaningful, thanks to the test system issues, but Tomb Raider immediately stands out as a game that does't appear to hit the CPU much at all.The 780M is actually slower than the 680M in some of the tests, but it does pull off a 21% lead over the 7970M in Tomb Raider—a game that tends to be very GPU intensive and very light on the CPU.