The problem with a gold motherboard color is that it often looks too much like copper, and several companies have tried it in recent years (ASUS on Z77, ECS’ Golden Series) with limited success. Back during Z77 launch, one group of users seems to not like the scheme, or couldn’t found a combination that works. There is the old gold themed specialist modded PC that looks good, but I’ll be honest and say I have not seen that many in general when red and black themes tend to win out. I have heard proponents of gold components suggest that the color scheme works in certain markets, such as China and the Middle East, but until I see those numbers I’d take it with a grain of salt.

Nonetheless, for Skylake, MSI has you covered. 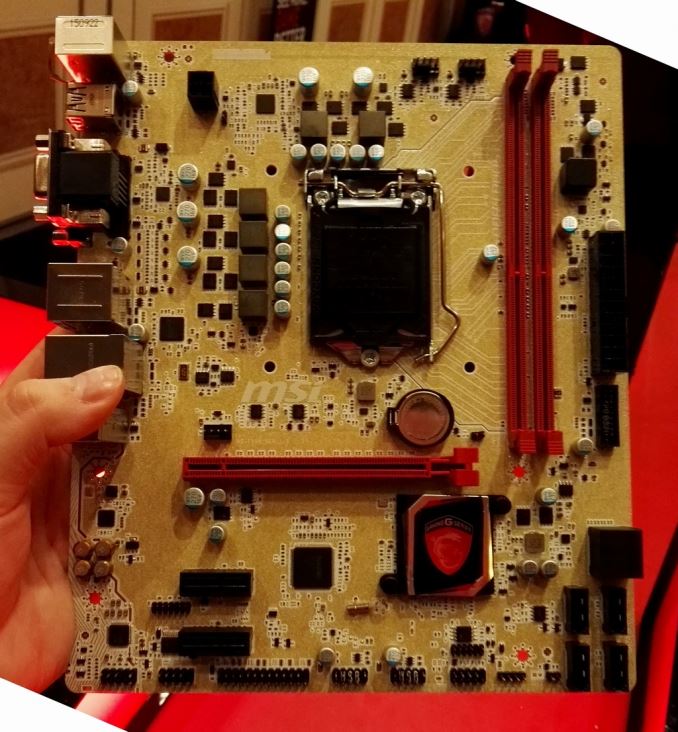 As part of the Gaming range, this model is aimed at the H150/B150 crowd more than the high end, and while I have heard remarks that it looks like the brown PCBs of old, that is actually a gold colored PCB that seems to have glitter embedded in it. The booth lighting didn’t help capture the effect properly, but I wonder if this isn’t part of a bigger idea.

MSI has been playing around with color schemes for a while, such as the ECO and the Krait series of motherboards which are both separate from the regular Gaming line or something like the OC Certified line. It is only going to be a matter of time before we try all colors, but it makes me wonder if this model was done at the request of a regional SI who wanted a few thousand units for their customers as part of a custom order. I have seen other motherboard companies put custom product runs into the mainstream before, and this might be the case here.

No word on regional release or pricing as of yet. I’m not sold on the color scheme straight away, and the glittery effect made me think about putting it in pink and slapping a Hello Kitty logo on it. I would be interested in seeing the scope of the sales though, especially where and to which retailers/system integrators.