The latest design has softened the exterior, moving away from the angular design that has been a part of Surface Pro since the beginning. The edges are now slightly rounded, but without radically changing the look. The new rounded sides provide an improved in-hand feel, without the uncomfortable sharpness of the older generations.

The design is familiar though, with the same silver color on the chassis, along with a thin plastic RF window at the top, where the power and volume controls are. The left-side features the 3.5 mm headset jack, the right-side features all of the ports, and the bottom has the keyboard connector.

Speaking of the ports, they are exactly the same as the Surface Pro 4. There’s a USB-A port, a mini DisplayPort, and the Surface Connect for power and expansion. For those that need to add a bit more storage, the new Surface Pro continues to offer a micro SD slot too.

The lack of USB-C with Thunderbolt 3 in a high-end 2017 device is definitely a knock against the new Surface Pro. Microsoft’s reasoning is that USB-C is a port with too many options, and no two ports are guaranteed to be the same, which will lead to customer confusion. There’s also the argument that most of our devices still use full-sized USB, so Microsoft has stuck to its guns and just kept the USB-A port. They aren’t wrong about USB-C being confusing, though. Other than USB data, which is the one thing that all USB-C should support – although not always at the same speed – ports can support displays, higher power levels, Thunderbolt 3, and more. The counterpoint to this argument is that Surface Pro could offer a USB-C that features everything, although it would cost not only in terms of actual cost, but also space for extra chips, and in a small device like the Surface Pro, space is at a premium. 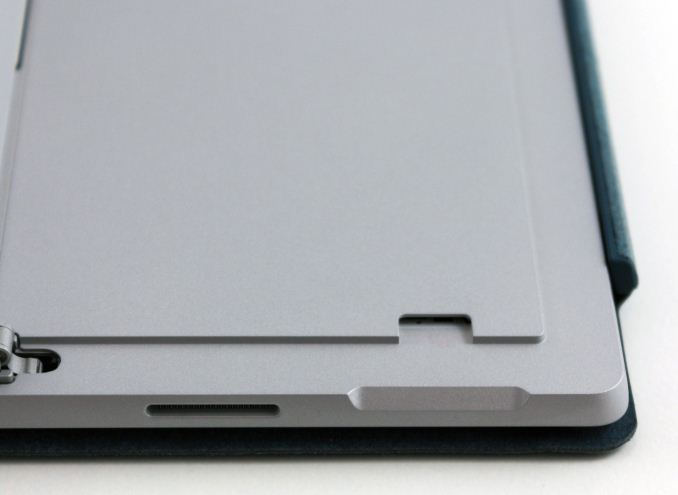 Their other argument is that, at least currently, almost anything that connects to USB-C needs an adapter or dongle of some sort, and that’s also true. But the counter to that is that the Surface Pro features a mini DisplayPort, which arguably needs a dongle or special cable to connect to almost anything anyway. A USB-C could offer the same DisplayPort signal, but way more.

There’s no argument that keeping the USB-A port is the right idea for today, but it would have been nice to see Microsoft adopt the new standard for the future, since a device with this kind of price has to have the expectation that it will still be around in several years, when USB-C will be more widespread.

The one area that Microsoft both pioneered – and continued to evolve – is the kickstand. Looking back at the original Surface devices, the kickstand really the key to the entire device, allowing Surface to quickly and easily be used as both a tablet, and a laptop. The latest kickstand improves everything, again.

The biggest change is that the kickstand now opens even wider. The opening arc increases from 150° to 165°, which gives the Surface Pro an even better platform for using the Surface Pen, and accessories like the Surface Dial, which works right on the display, just like the Surface Studio.

The new kickstand seems to be even smoother than the Pro 4, and still offers just the right amount of friction to not allow the Pro to change angles when using touch on the display.

The kickstand is still one of the signature features of the Surface Pro, and it’s great to see it continue to improve.

The Surface Pro 4’s cooling was a big improvement over the Surface Pro 3, greatly reducing CPU thermal throttling, but also being quieter. The new Surface Pro develops on this again. When the Surface Pro 4 launched, the engineers let us know that they felt that the cooling system could dissipate the full 15-Watts of heat from the CPU passively, but they still included the fan on both the Core i5 and Core i7 models for the Surface Pro 4.

The new Surface Pro ditches the fan completely on the (15W) Core i5 model now, leaving just the (15W) Core i7 model with active cooling. Microsoft hasn't yet sampled this model of the Surface Pro, but hopefully we’ll be able to test it out soon to see what ramifications that changes has for performance. For noise though, it’s all good news, since it should be practically silent.

The Core i7 model, that we do have for review, is even quieter than the outgoing Pro 4, especially when at its default settings. So despite the active fan, the cooling system is much quieter. The cooling vents have been changed as well, with a much more subtle look to them on the new Pro.

The cooling changes have all been positive, and we’ll check out the performance of them later in the review.