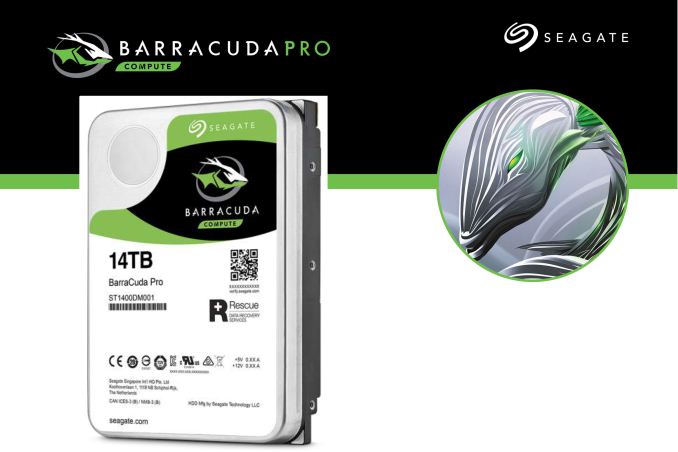 The exponential increase in data storage requirements over the last decade or so has been handled by regular increases in hard drive capacities. Multiple HDD vendors supply them to cloud providers (who get the main benefits from advancements in hard drive technologies), but, Seagate is the only one to also focus on the home consumer / prosumer market. In the last three generations, we have seen that Seagate has been the first to target the desktop storage market with their highest capacity drives. The 10 TB BarraCuda Pro was released in Q3 2016, and the 12 TB version in Q4 2017. Seagate is launching the 14 TB version today.

The Seagate BarraCuda Pro 14TB is a 7200RPM SATAIII (6 Gbps) hard drive with a 256MB multi-segmented DRAM cache. It features eight PMR platters with a 1077 Gb/in2 areal density in a sealed enclosure filled with helium. The main change compared to the 12TB version introduced last year is the usage of Seagate's second-generation two-dimensional magnetic recording (TDMR) heads, allowing for higher areal density (1077 Gb/in2 vs. 923 Gb/in2 without TDMR). If you are curious about how TDMR enables this, we have a brief explanation towards the end of this review.

According to Seagate, the 14TB BarraCuda Pro typically draws around 6.9W, making it one of the most power efficient high-capacity 3.5" hard drives in the market. It targets creative professionals with high-performance desktops, home servers and/or direct-attached storage units. It is meant for 24x7 usage (unlike traditional desktop-class hard drives) and carries a workload rating of 300TB/year, backed by a 5-year warranty. The drive also comes with a bundled data-recovery service (available for 2 years from date of purchase). The various aspects of the drive are summarized in the table below.

With the launch of the 14TB BarraCuda Pro, Seagate has also updated the model numbers for the other capacities in the series. While performance numbers remain relatively unchanged, capacities 10TB and up come in at 690g, while the 8TB is at 650g. The 6TB, however, is at 780g, pointing to different number of platters for different capacities, and even non-helium technology for the smaller ones.

A high-level overview of the various supported SATA features is provided by HD Tune Pro. 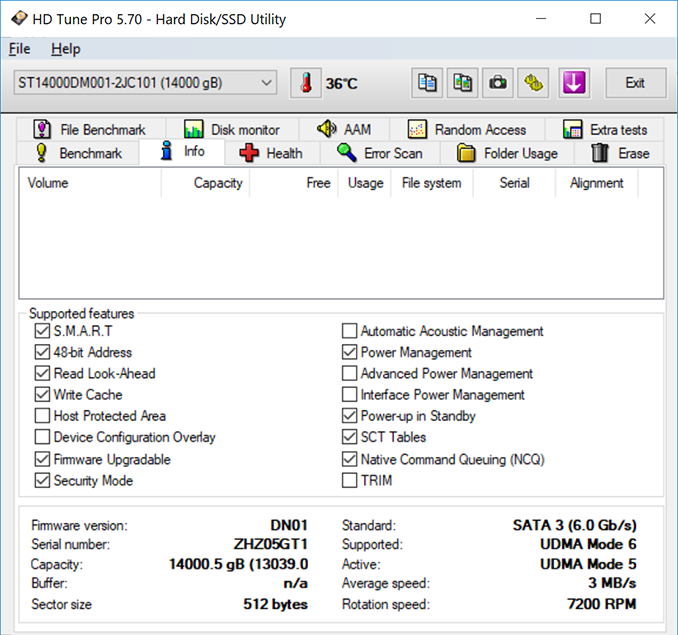 The internal drive scenario was tested by connecting the drive to one of the SATA ports off the PCH, while the Akitio Thunder3 Duo Pro was used for evaluating the performance in a DAS. The Thunder3 Duo Pro was connected to one of our testbed's Thunderbolt 3 Type-C port. The controller itself connects to the Z170 PCH via a PCIe 3.0 x4 link.