The ASRock Rack EPYCD8-2T Motherboard Review: From Naples to Rome

It's no secret that AMD is looking to carve out a bigger share in the server market with their enterprise EPYC processors, and much fanfare has been made about the high core-count offered for the price when compared to Intel's Xeon range of processors. The ASRock Rack EPYCD8-2T looks to utilize all of the processing power offered by AMD's EYPC, and the EPYCD8-2T has a professional-centric feature set built into its ATX design. We also have eight memory slots, up to nine SATA ports, has two OCuLink to U.2 slots, dual 10 G Ethernet, and seven PCIe 3.0 slots. This model also supports both AMD's EPYC 7001 Naples and 7002 Rome processors (Rome via an update).

ASRock Rack is the enterprise arm of ASRock, and caters to the workstation, server and data center market. For the longest time, ASRock Rack catered mainly to Intel's offerings, including Intel Xeon and the large Atom designs. Now the company has a small but expanding team focusing on the EPYC side of the market, and the ASRock Rack EPYCD8-2T is an ATX sized solution which is compatible with both Naples and Rome. Today we will be focusing on the EPYCD8-2T and its server and workstation feature set.

The ASRock Rack EPYCD8-2T is an ATX sized single LGA 4094 socket option designed for AMD's EPYC processors. The board has an all-green PCB and has a transposed CPU socket designed for more efficient airflow when installed into a 1U or related chassis type. Memory support stretches across eight slots with support for RDIMMS up to 32 GB, and LRDIMMs up to 128 GB per slot. This means that the EPYCD8-2T can house up to 1 TB of DDR4 operating in eight-channel. This model has supports DDR4-3200/2933/2666/2400, both in the RDIMM and LRDIMM variety. 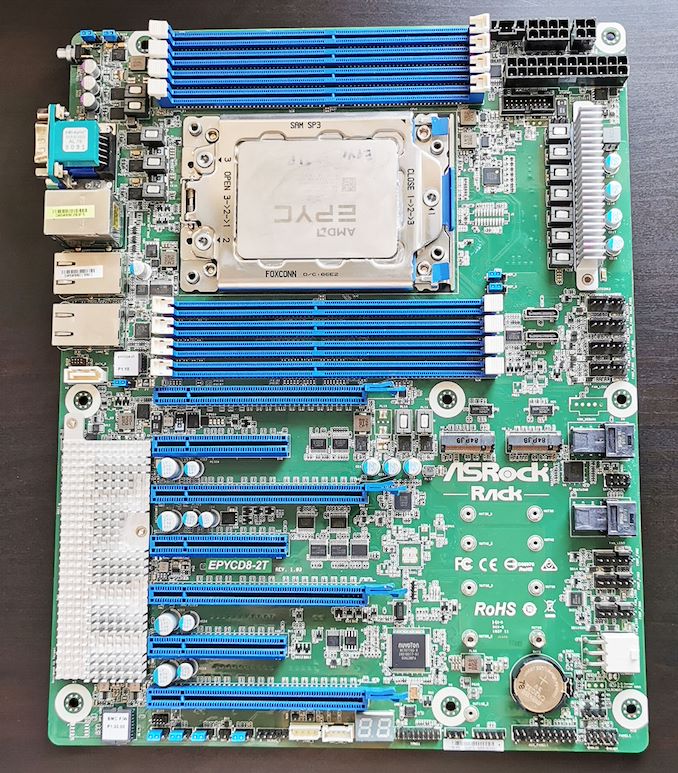 Providing BMC maintenance functions is the stalwart Aspeed AST2500 management controller which allows users to remotely manage the system. The networking is taken care of by an Intel X550-AT2 Ethernet controller which provides dual 10 G Ethernet on the rear panel. A separate Realtek RTL8211E acting as a dedicated IPMI Ethernet port, with a D-sub 2D video output powered by the Aspeed AST2500.

On the PCIe front, the ASRock Rack EPYCD8-2T has plenty of expansion slot support to make the most of the 128 lanes from the CPU. which include four full-length and three half-length (but open-ended) PCIe 3.0 slots. These slots operate at x16/x8/x16/x8/x16/x8 which makes for a total of 88 PCIe 3.0 lanes dedicated to graphics and expansion support.

For the storage, ASRock Rack includes two mini SAS HD connectors which each offers the capability to install up to four SATA devices, with up to eight in total. A separate SATA DOM port allows for another SATA device to be installed bringing the boards total of SATA capability up to nine. A total of two PCIe 3.0 x4 M.2 slots are located vertically below the right-hand side bank of memory slots, with two OCuLink ports just to the right of the DRAM slots for U.2 devices. 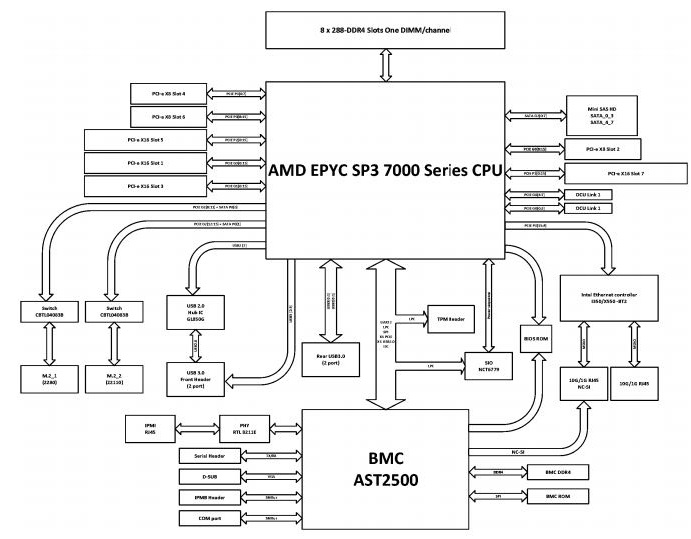 The performance of the ASRock Rack EPYCD8-2T is competitive with other models we have tested, including the GIGABYTE MZ31-AR0. In comparison to the GIGABYTE model, the EPYCD8-2T shows much better power efficiency with a strong showing in our long idle power testing, as well as at full-load with our AMD EPYC 7351P processor. Server and workstation motherboards tend to take longer to boot up into Windows due to controller and BMC initialization during POST, but our POST time testing shows the EPYCD8-2T to POST in just over 50 seconds, with a slightly quicker POST time of 45 seconds with non-essentially controllers disabled. The ASRock Rack EPYCD8-2T is the only model I've personally tested on any platform to be under 50 µs in our DPC Latency testing, making this a solid option for users building an audio-focused workstation.

The ASRock Rack EPYCD8-2T currently retails for $498 at Newegg and represents just handful of single-socket LGA4094 models at the sub $500 price point. Included in that list is the similar, but cheaper ASRock Rack EPYCD8 ($460) which is essentially the same board, but without dual 10 G Ethernet. Other models at a similar price point include the Supermicro MBD-H11SSL-NC ($470) with dual 1 G Ethernet and fewer SATA, as well as the ASUS KNPA-U16 ($462) which has superior storage and better memory support but opts for two 1GbE too. The distinguishing factor in specifications for the EPYCD8-2T that we're reviewing today is the Intel X550 Dual 10 gigabit Ethernet controller, and seven PCIe 3.0 slots which is impressive on an ATX sized model.

Read on for more extended analysis.