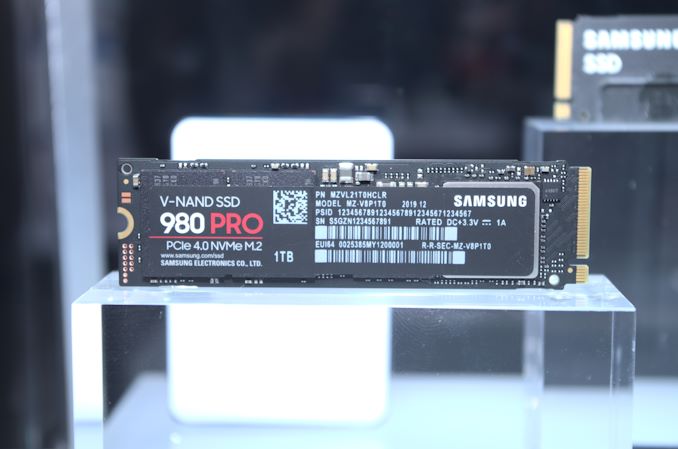 Samsung's booth at CES 2020 includes our first look at their next flagship consumer SSD, the 980 PRO M.2 NVMe SSD. This would appear to be Samsung's first client/consumer SSD to support PCIe 4.0, which has until now only been rolled out to their high-end enterprise drives.

Since this just a low-key preview instead of a formal announcement with a press release, information is limited. The exhibit shows only sequential performance numbers: 6500 MB/s reads, 5000 MB/s writes. That's a bit better than what we currently see with PCIe 4.0 drives using the Phison E16 controller, but by the end of this year we should start seeing the Phison E18 and other controllers offering sequential speeds around 7GB/s, so the 980 PRO may have little or no time to set throughput records for the consumer SSD market.

The available capacities will range from 250GB to 1TB, which strongly indicates that Samsung us still using 2-bit MLC for the PRO line rather than switching to 3-bit TLC NAND flash as the rest of the industry has done for their flagships. The fate of Samsung's flagship SSD product line was a bit unclear when Samsung updated the 970 EVO with new NAND as the 970 EVO Plus but did not introduce an accompanying 970 PRO Plus.

Samsung was unable to locate any employees at their sprawling "booth" who could answer our technical questions, so we don't have confirmation of which generation of V-NAND this uses (probably the 5th gen. 92L), nor do we have any details on the controller. We also don't have a timeline for retail availability. UPDATE: Samsung says to expect more information in Q2 of this year.