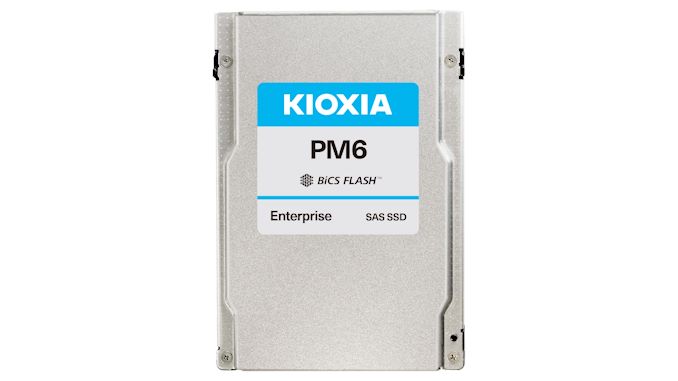 Serial-Attached SCSI (SAS) originated from the simple idea of running the enterprise-grade SCSI protocol over the Serial ATA physical layer, obsoleting parallel SCSI connections in the same way that SATA displaced parallel ATA/IDE in the consumer storage world. The first version of SAS corresponded to the second generation of SATA, with each running at 3 Gbit/s. SATA became a dead-end technology after one more speed increase to 6 Gbit/s, but SAS development has continued to higher speeds: 12Gbit SAS-3 was standardized in 2013 and "24G" SAS-4 was standardized in 2017. The "24G" is in quotes because SAS-4 actually runs at a raw rate of 22.5Gbit/s but delivers a true doubling of usable data rate by switching to lower-overhead error correction: 8b/10b encoding replaced with 128b/150b (actually 128/130 plus 20 bits of extra forward error correction), similar to how PCIe 3.0 switched from 8b/10b to 128b/130b to deliver 96% higher transfer rates with only a 60% increase in raw bit rate. Also similar to PCIe, it takes quite a while to go from release of the interface standard to availability of real products, which is why a 24G SAS SSD is only just now arriving.

Kioxia's enterprise SAS SSDs and their enterprise NVMe SSDs share the same bilingual controller ASIC and consequently the PM6 has a very similar feature set to the previously-announced CM6 PCIe 4.0 SSDs. This includes dual-port interface support for higher performance or for fault tolerance, and enough ECC and parity protection for the drive to survive the failure of two entire flash dies. The SAS-based PM6 series is limited to lower maximum throughput than the CM6, but a dual-lane 24G SAS link is still slightly faster than PCIe 3.0 x4. The higher performance enabled by 24G SAS means the PM6 can require more power than its predecessors—now up to 18W, though the drive can be configured to throttle to lower power levels ranging from 9W to 14W.

The PM6 SAS family is available in three endurance tiers: the 1 DWPD and 3 DWPD models closely correspond to CM6 NVMe models, but only the SAS product line gets a 10 DWPD tier. Maximum capacities are 30.72 TB in the 1 DWPD series, 12.8 TB in the 3 DWPD series and 3.2 TB in the 10 DWPD series. Kioxia said that 4 TB class drives are still the most popular, but this will probably be shifting toward the 8 TB models over the next year or so. The 30.72 TB models will remain more of a niche product in the near future, but they expect demand for those capacities to start picking up in 2021 or 2022. Detailed performance specifications for each model are not yet available.

SAS in general is still a growing market both in terms of number of units and bits shipped and is projected to continue growing for at least a few more years, even though NVMe is gradually taking over the enterprise SSD market. Kioxia's customer base for SAS SSDs has been divided between storage array vendors and the traditional enterprise server market. The storage array market has been quicker about migrating to NVMe so this may be the last generation of SAS SSDs to see significant adoption in that market segment. SAS will be hanging around in the enterprise server market for a lot longer, helped in part by the backwards-compatibility with SATA hard drives for cheap high-capacity storage, and the straightforward traditional RAID solutions as compared to the challenges with NVMe RAID. The server market typically doesn't make as much use of the dual-port capability of SAS drives, so the speed boost from 24G SAS will be particularly welcome there, allowing drives to now reach about 2.3GB/s each rather than about 1.1GB/s on 12Gb SAS.

The Kioxia PM6 SAS SSDs are now available for customer qualification and evaluation. The drives have already been validated with 24G SAS host controllers from both Broadcom and Microchip (Microsemi/Adaptec).