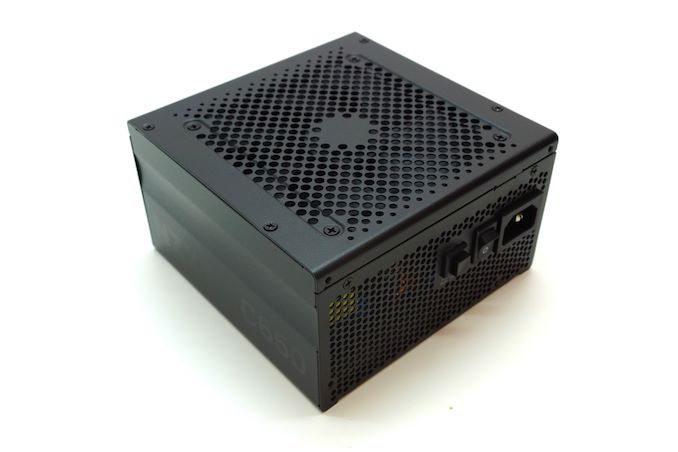 NZXT is a company that has come from fairly humble origins, starting things off back in 2004 with just a couple of PC cases. They have come a long way since then, slowly by surely expanding their ever-growing product portfolio. Nowadays, NZXT is one of the most prominent PC case, cooling, and power supply manufacturers, with a very strong global market presence.

We have reviewed several NZXT products in the past, yet very few of their PSUs ever found their way into our labs – in fact it's been nearly a decade since our last NZXT PSU review. That counter resets today, as we are taking a look at NZXT’s latest upper-class PSU design, the C-series C650.

Among NZXT's PSU lineup, the C-series is very much the manufacturer's bread and butter for PSUs, with C-series PSUs making up the vast majority of its product lineup. At a high level, the C-series is designed for advanced PC users and enthusiasts alike, and with the rest of NZXT's lineup only going higher still, it's clear that the company is taking aim at a specific niche of the PSU market rather than going after a broad swath of the PSU market. Along these same lines, NZXT has also dialed in to the middle of the market in terms of capacity; with three C-series models ranging from 650 Watts to 850 Watts, the PSUs fall into a typical range for today's high-end single CPU/single GPU systems.

As for our review, today we'll be taking a look at the least powerful unit of the series the 650 Watt C650.

We received the NZXT C650 PSU in a relatively simple cardboard box. The artwork on the box is simplistic, yet appealing, with just a beautifully taken picture of the unit decorating the front side of the box. Its thick cardboard walls and internal foam padding provide adequate shipping protection. 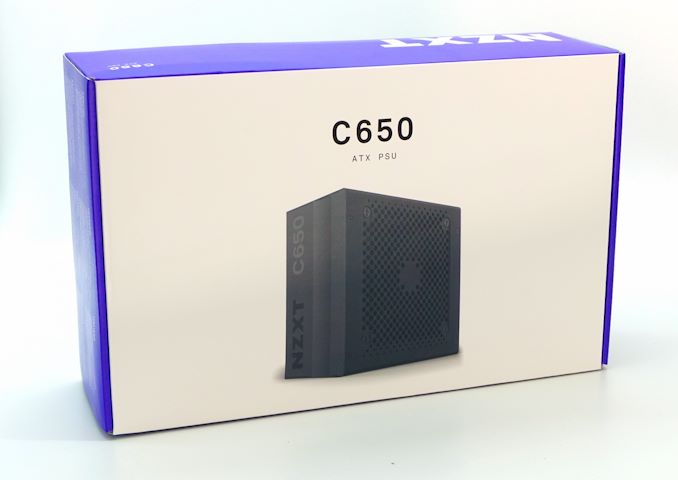 NZXT stuck to the basics when it comes to the C650, supplying only four mounting screws, some modular cables, and an AC power cable alongside the PSU. The modular cables do however come inside a simple purple bag, so they can be contained. Otherwise there are no cable straps, cable ties, or other accessories of any kind. 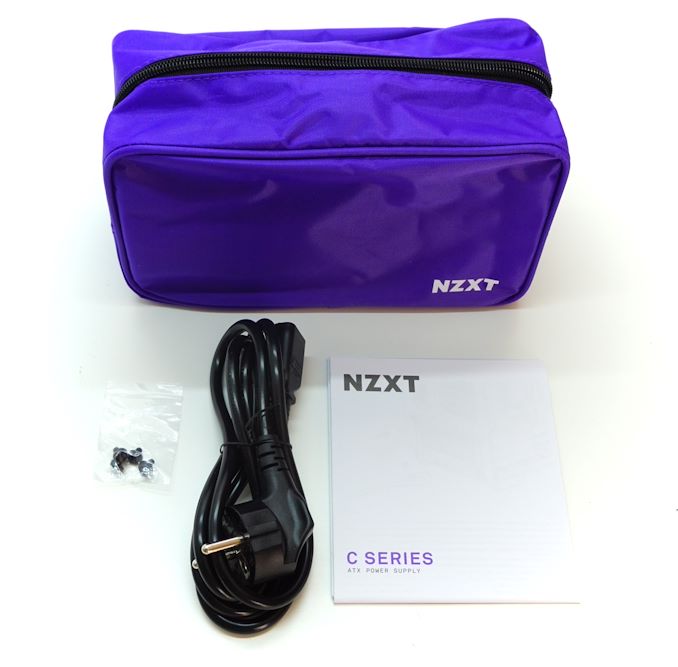 The NZXT C650 PSU is a fully modular design, meaning that no cables are hardwired to the chassis. All of the cables are made of all black wires and black connectors. The SATA and Molex cables are “flat” type cables, with exposed wires that are attached to each other, while the PCI Express, CPU, and 24-pin ATX cables have nylon sleeving covering the wires. 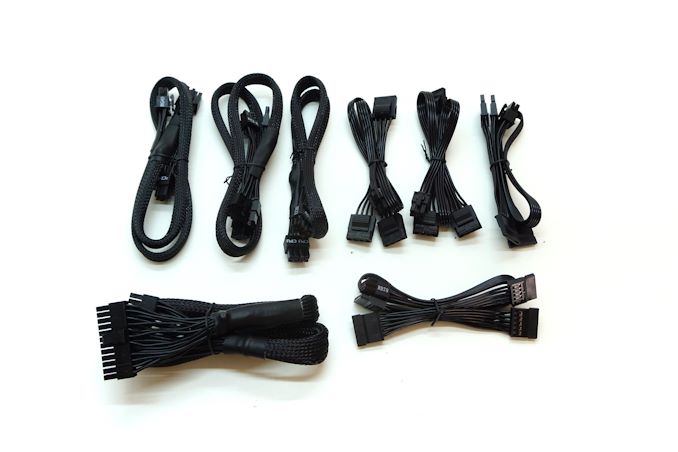 NZXT designed the C650 to be aesthetically subtle and functional. The chassis is entirely black, with the company logo and product name printed with dark reflective fonts on its two sides. A black sticker with the unit’s electrical certifications and specifications can be found on the top side of the chassis. Other aesthetic improvements are limited to simple chassis upgrades, such as rounded edges and an integrated fan finger guard. Although the PSU is 150 mm deep – a little longer than what the ATX standard dictates (140 mm) – it is compatible with the vast majority of ATX-compliant cases available. Only very few proprietary case designs may cause compatibility problems. 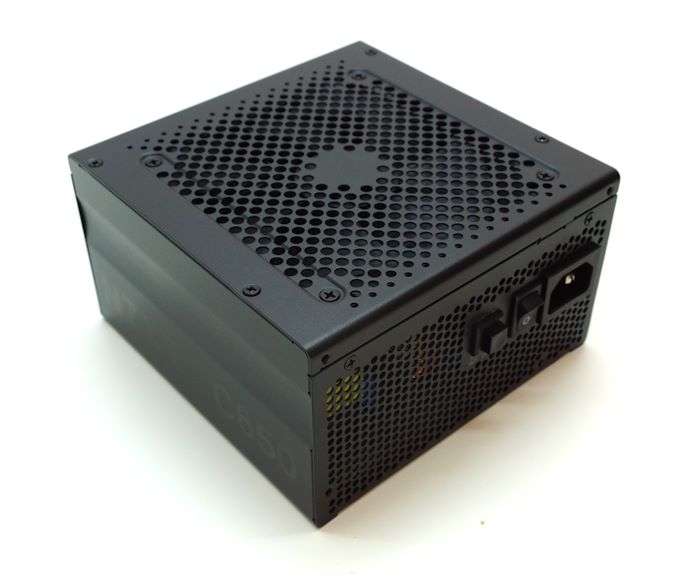 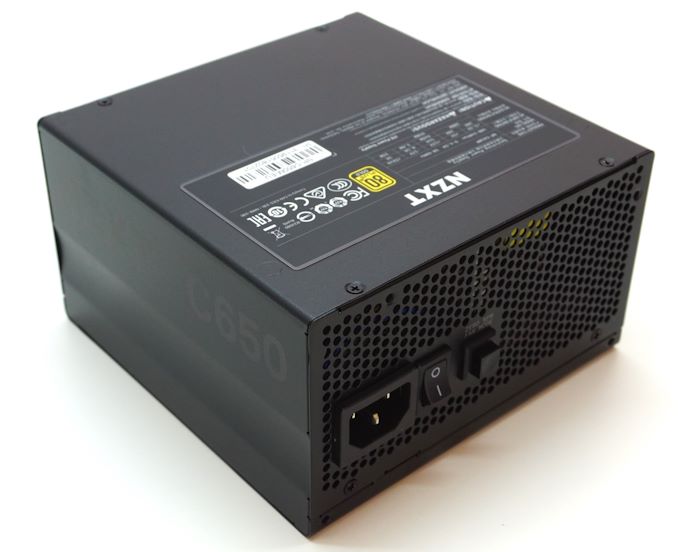 At the rear side of the PSU, we can see the typical AC cable receptacle and on/off switch, as well as a toggle switch that controls the cooling fan mode. The C650 has two cooling modes – the basic mode, where the fan spins constantly and its speed is thermally controlled, and the hybrid mode, where the fan can stop spinning entirely when the load is low enough that active cooling isn't necessary. Some users are uncomfortable with zero active cooling or rely on the PSU’s airflow for other reasons, therefore the option to disable the hybrid mode was a good idea. 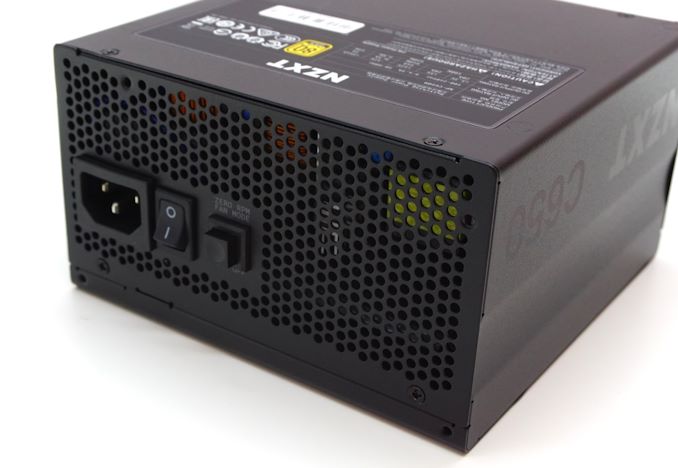 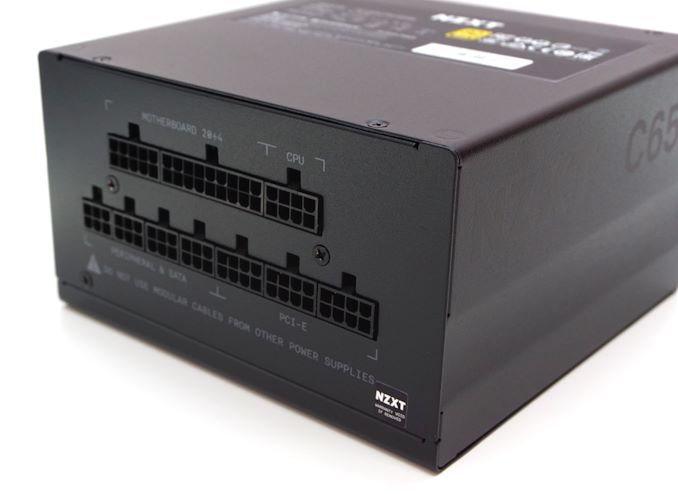 Modular connectors cover most of the PSU’s front surface. A basic legend is directly printed onto the chassis, along with a warning not to use cables from other manufacturers. The connectors are keyed, ensuring that it is not possible to insert the wrong cable into the wrong receptacle. 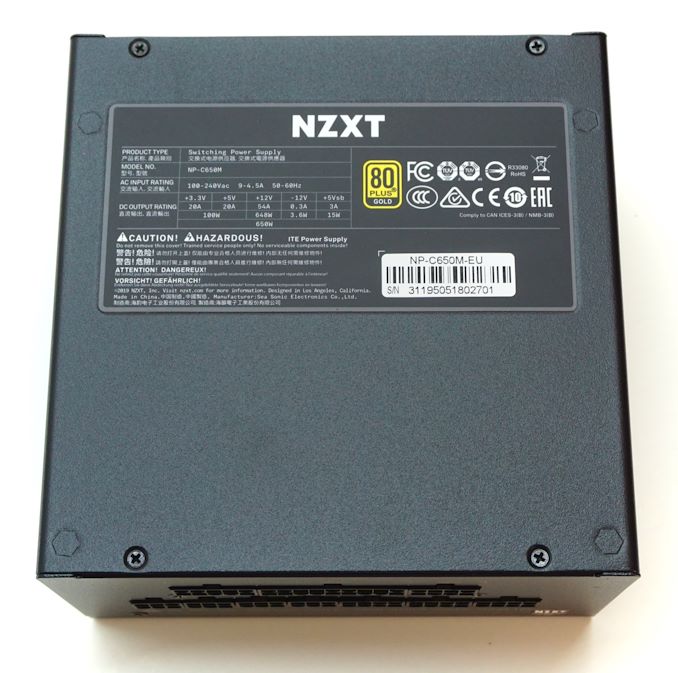 The NZXT C650 relies on a 120 mm fan for its cooling needs, which is the largest fan that could fit inside its chassis. It employs a simple black 120 mm fan that is made by Hong Hua, a known but not very popular manufacturer. In fact, these fans aren't even used by very many OEMs, instantly hinting at the OEM behind the creation of the C650. The HA1225H12F-Z has a fluid dynamic bearing (FDB) engine and can be annoyingly loud at its maximum speed of 2200 RPM, though we expect it to almost never reach those speeds under normal operating conditions. 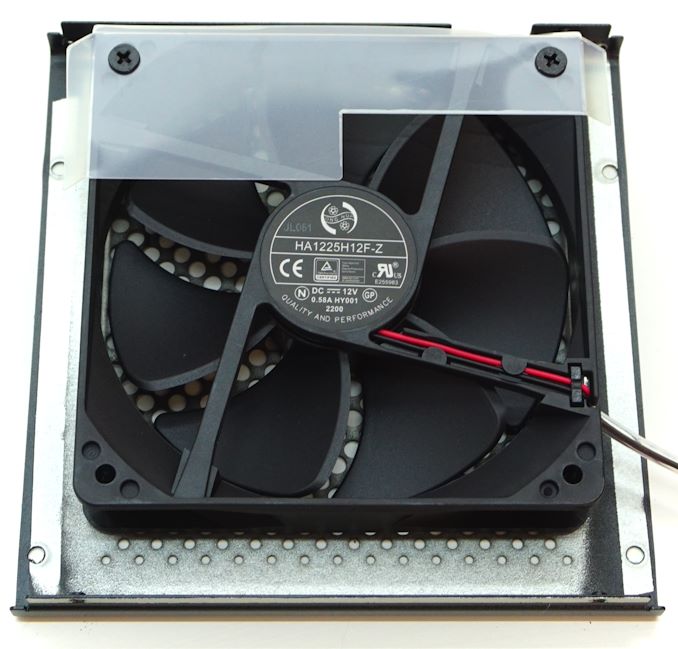 A trained eye will easily identify the OEM behind the NZXT C650 to be Seasonic, as it is based on a popular and highly decorated platform. NZXT did tweak the core platform a little to ensure compatibility with last-gen GPUs, but most of the reference design remains untouched. The heatsinks are relatively small and simplistic, suggesting (before testing) that the platform is either highly efficient or very loud. 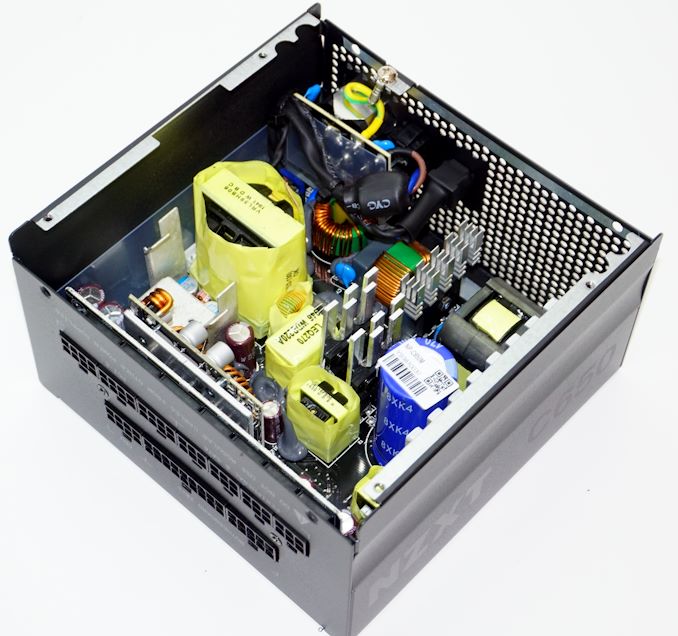 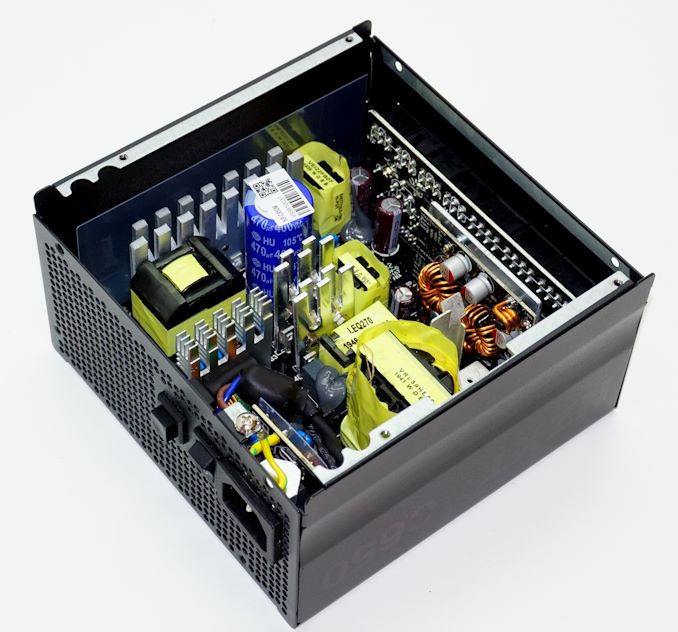 The filtering stage begins on a small PCB at the back of the AC cable receptacle and continues on the main PCB. It is a reference design that consists of four Y capacitors, two X capacitors, two filtering inductors, and a surge-suppressing MOV. There are two bridge rectifiers sharing a single heatsink, which is uncommon for a unit with such a modest power output. The primary APFC capacitor is a 400V/470μF electrolytic capacitor made by Hitachi and is supported by a sizable coil. 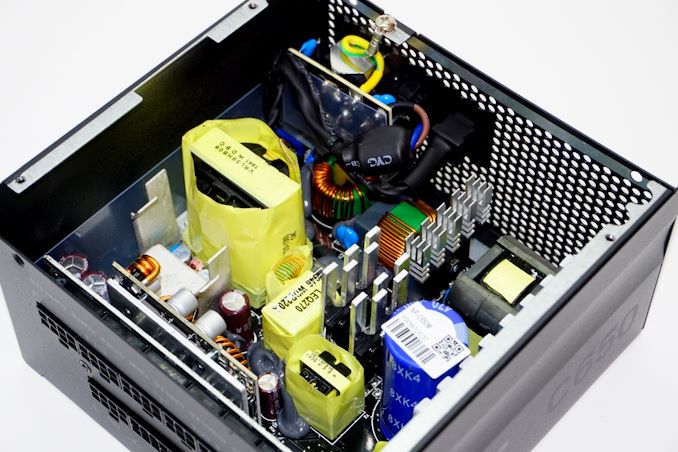 Moving on to the primary inversion stage, we can see four transistors forming a typical full-bridge topology. Very few manufacturers opt for a full bridge design due to its cost, even with platforms designed for top-tier PSUs, yet it is more reliable and efficient than equivalent half-bridge topologies. They are mounted on small heatsinks in pairs, hinting the very high efficiency of both the topology and the transistors themselves. 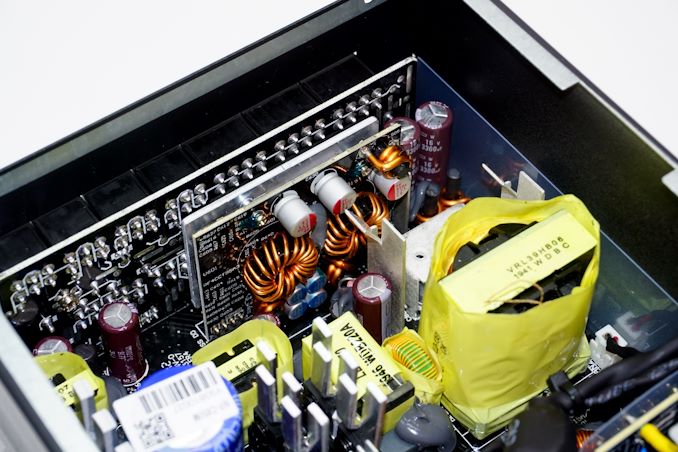 The secondary side conversion stage is also simplistic, with just a couple of MOSFETs generating a single 12V line. The rest of the voltage lines are being generated by DC to DC converters that are mounted on a secondary daughterboard. All of the secondary capacitors, electrolytic and polymer alike, are supplied by Nippon Chemi-Con and Rubycon, making the C650 an all-Japanese affair. 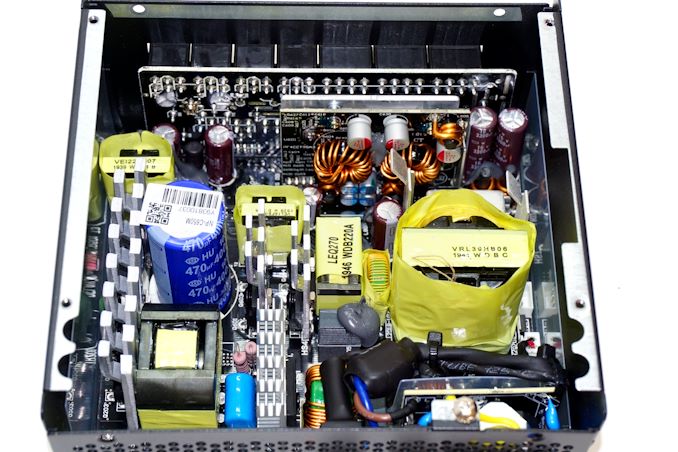 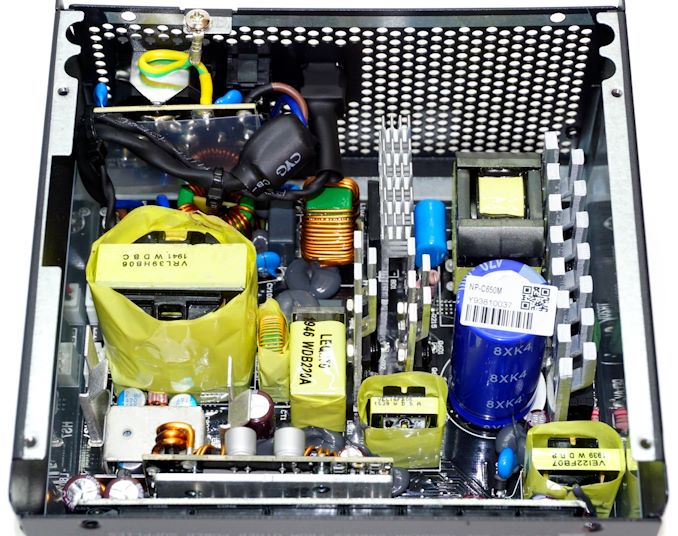