For the testing of PSUs, we are using high precision electronic loads with a maximum power draw of 2700 Watts, a Rigol DS5042M  40 MHz oscilloscope, an Extech 380803 power analyzer, two high precision UNI-T UT-325 digital thermometers, an Extech HD600 SPL meter, a self-designed hotbox and various other bits and parts. For a thorough explanation of our testing methodology and more details on our equipment, please refer to our How We Test PSUs - 2014 Pipeline post. 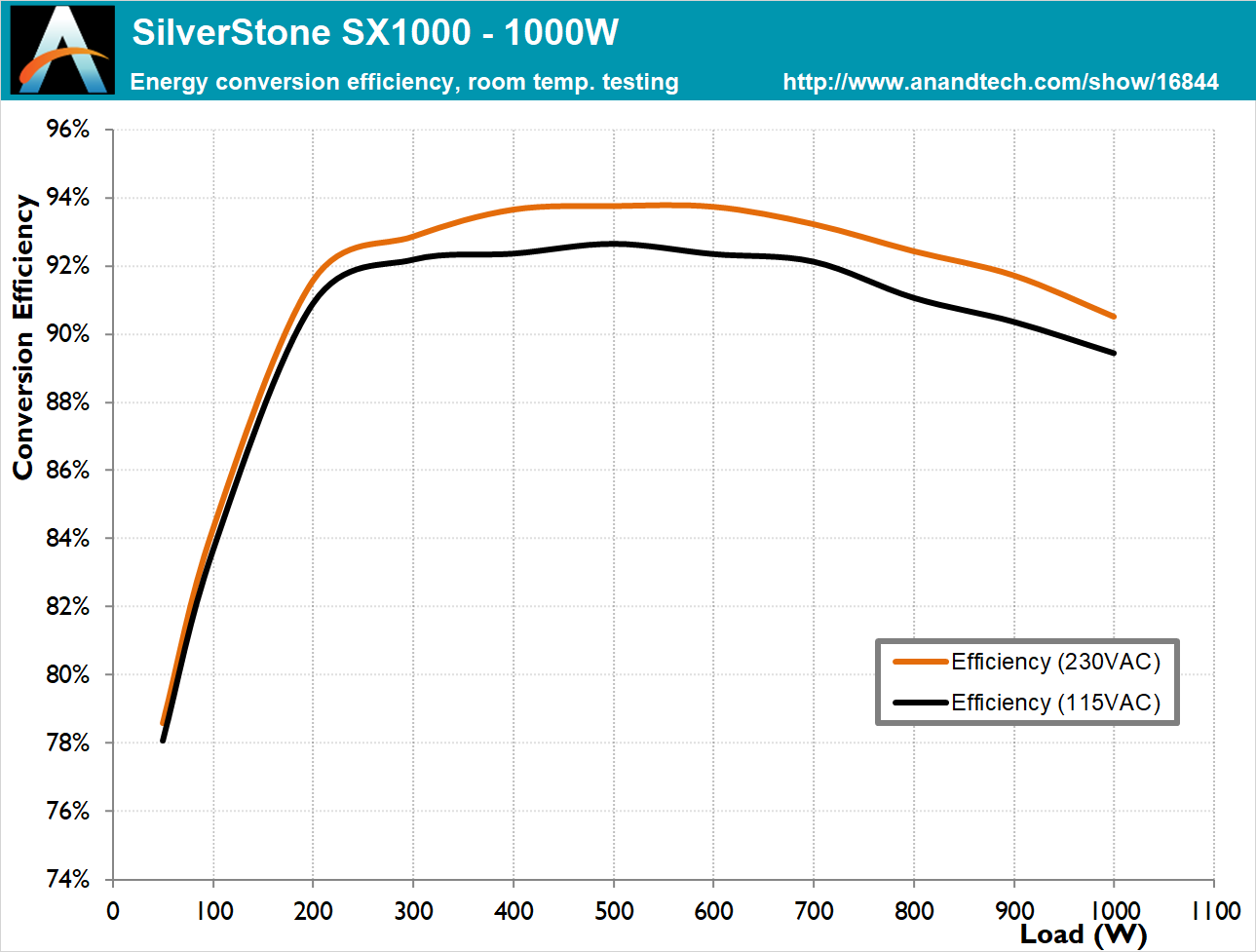 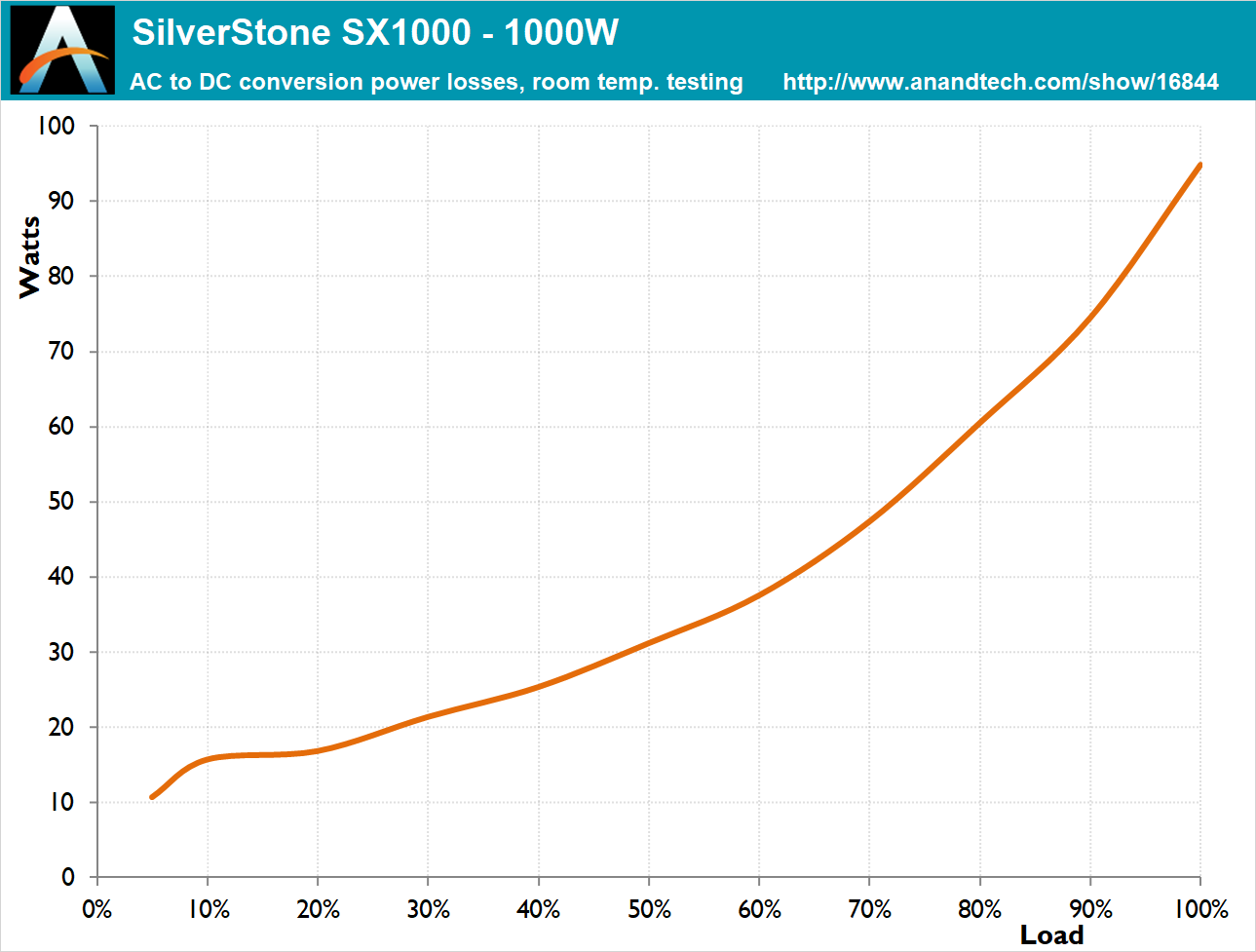 True to its specifications, the SilverStone SX1000 easily reached 80Plus Platinum efficiency levels while operating with a 115 VAC input. The increase in efficiency that switching to a 230 VAC input offers is measurable, but it would not be enough to grant the SΧ1000 an 80Plus Platinum certification, as the efficiency at 50% load did not surpass 94% as required by the protocol. Nevertheless, the efficiency figures are very good by any standard.

With that said, there is still significant room for improvement on the lower end of the curve, as the efficiency drops very sharply when the load is lower than 7-8% of the unit’s rated capacity. This is a small fraction of the PSU's total output, but still a significant amount of power on an absolute basis thnaks to the unit's high output. 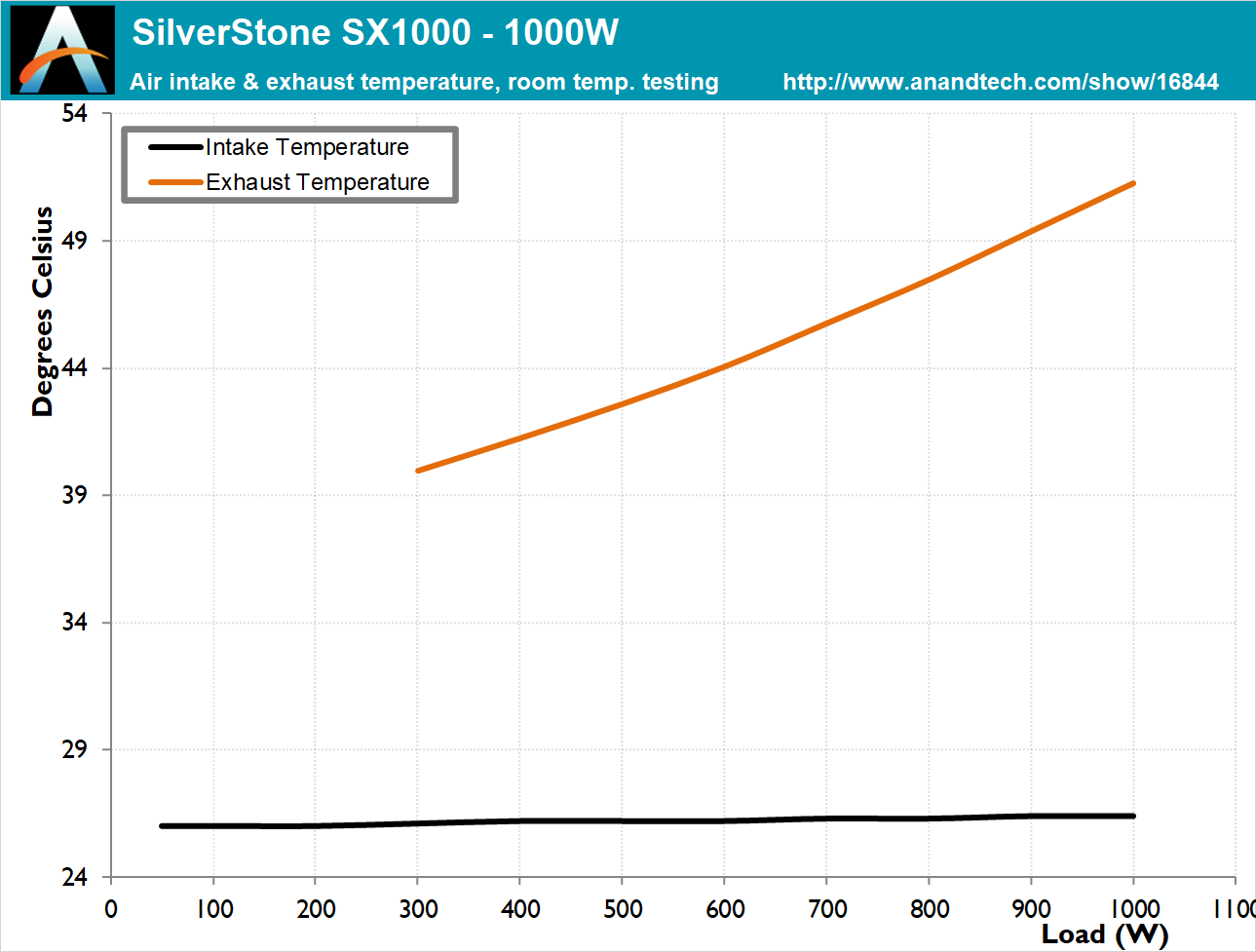 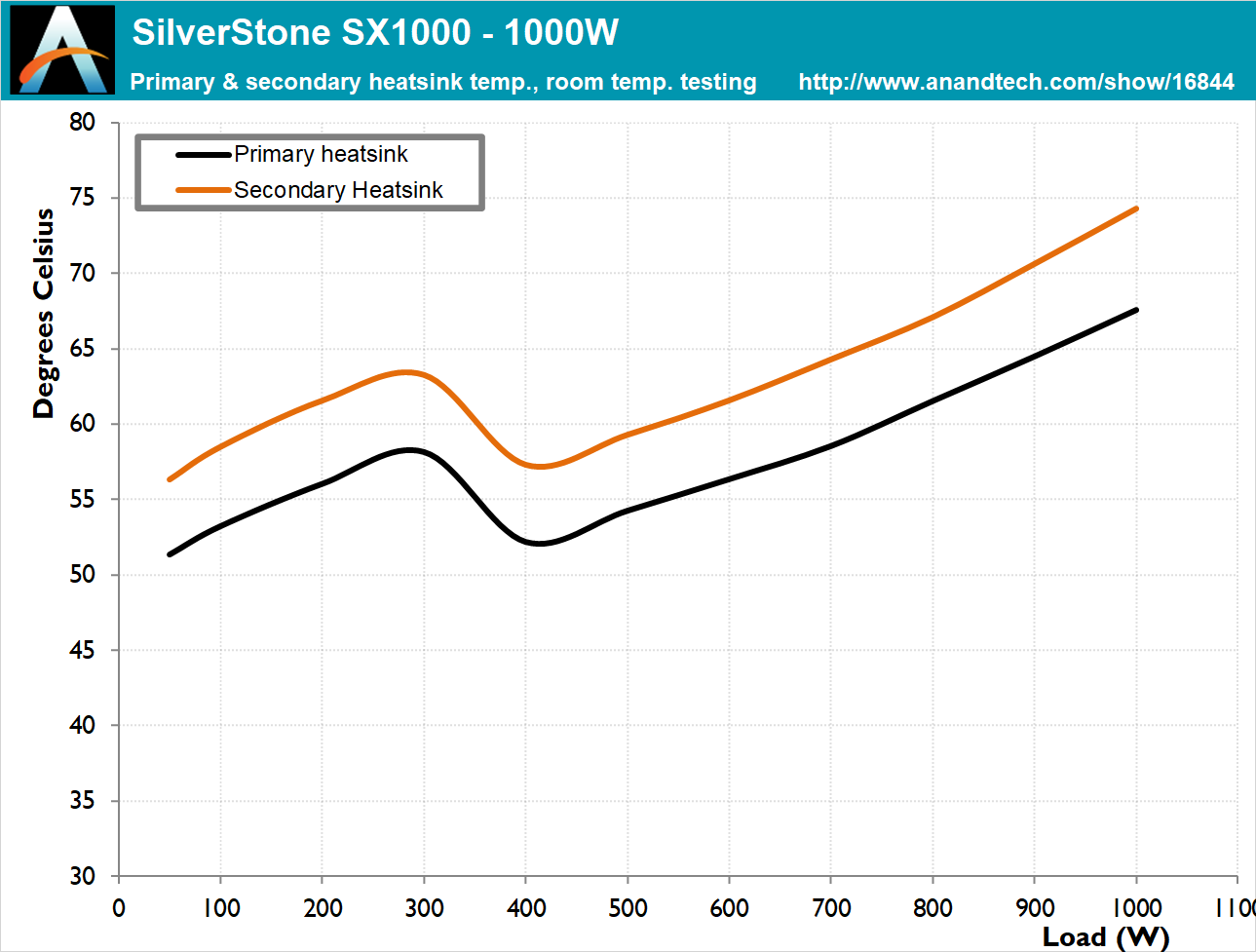 SilverStone designed the SX1000 to be semi-fanless, i.e., the fan only spins when the load or temperatures are high enough to necessitate it. 80Plus Platinum units are efficient enough to operate in fanless mode until the load reaches several hundred Watts. The SX1000 was true to that rule, starting its fan when the load reached 300 Watts and remained this high for a few minutes. That is high enough to ensure that the fan will never spin when the system is idling or performing simple tasks. 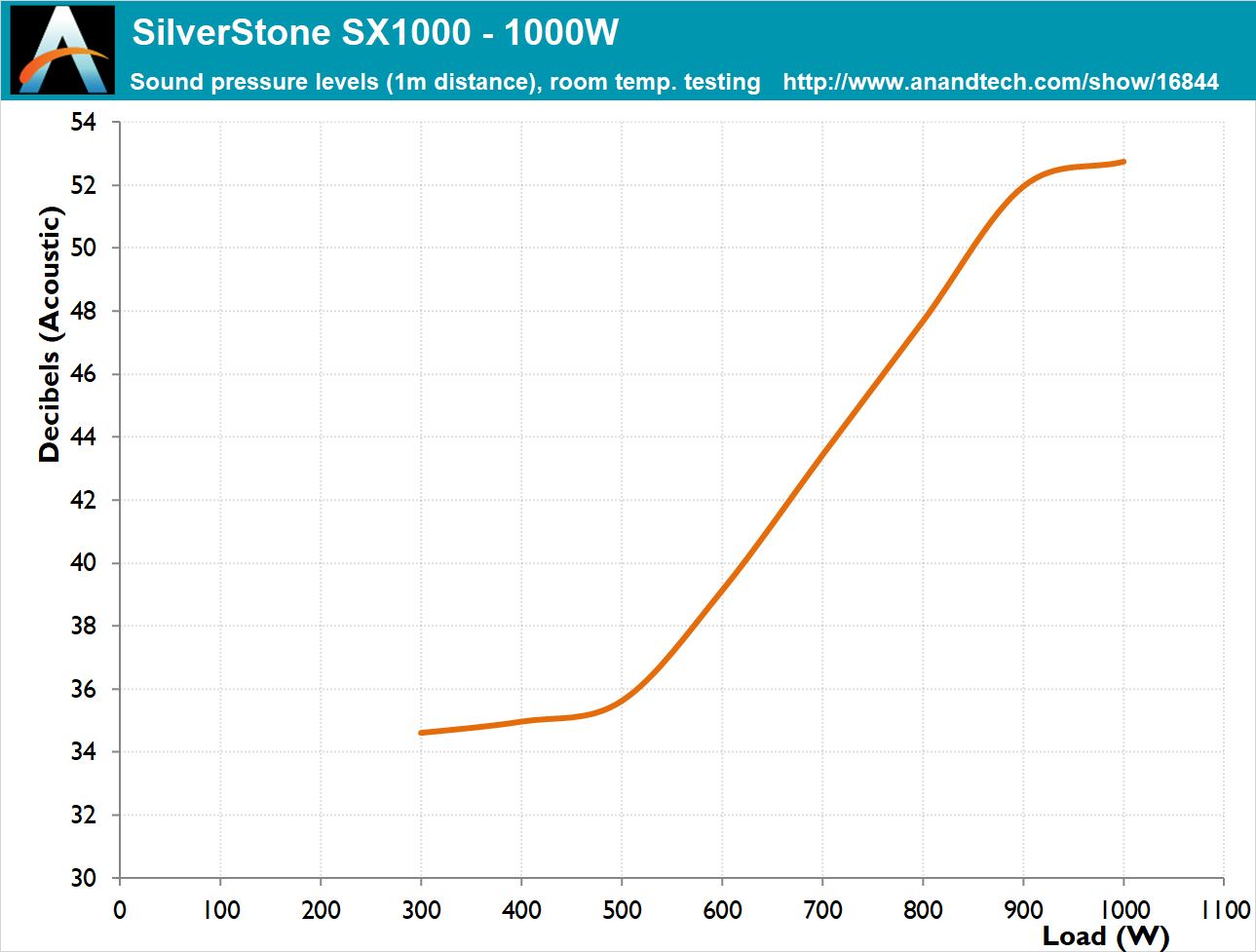 Because the thermal circuit only starts the fan when the load is 300 Watts or greater, there's a fairly narrow window where the fan remains relatively quiet. If the load exceeds 500 Watts, the tiny heatsinks of the SX1000 cannot cope with the thermal losses and the demand for cooling falls upon the low-profile fan, which will keep increasing its speed in order to maintain the internal temperatures of the PSU within safe levels. The fan reached its maximum speed with a 90% load, while the SX1000 was operating unobstructed and in a room temperature environment.