As its name implies, the Radeon 9600 Pro Mac & PC Edition is a single card that will work in both Macs and PCs.  The dual compatibility is made possible with only a single ROM chip loaded with both sets of firmware.  The card actually boots as a PC card, but if installed in a Mac, the OS will override the PC firmware and start it up as a Mac card.  On a PC, the system isn't at all aware of the Mac firmware present. 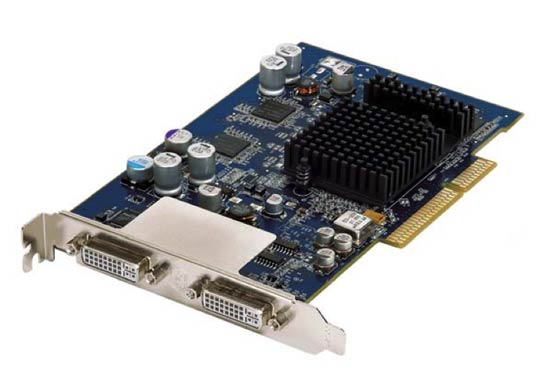 With the firmware problem taken care of, the rest of the card works just fine in either type of system.  It's an AGP 4X card that'll work in both 4X and 8X slots, meaning that it can be used in both Power Mac G4 and G5 systems, as well as PCs, obviously. The card features two DVI outputs, one of which is driven by the two external Silicon Image TMDS transmitters on the board itself.  The two TMDS transmitters in conjunction enable one of the DVI outputs to support dual-link displays, such as the 30" Cinema Display, at full resolution.  ATI wants the 9600 Pro Mac & PC Edition to be the card that enables other display makers to bring out similarly high resolution desktop displays, as this one card can drive them regardless of platform.  The dual-link DVI port supports a maximum 330MHz pixel clock, and only approximately 270MHz is required to drive the 30" Cinema Display's 2560 x 1600 resolution, so higher resolutions will be supported if other panel makers are so inclined.  The single link DVI port is a standard 165MHz connection, the fastest speed supported by a single TMDS transmitter.  ATI includes a single DVI-to-VGA adapter in the box. 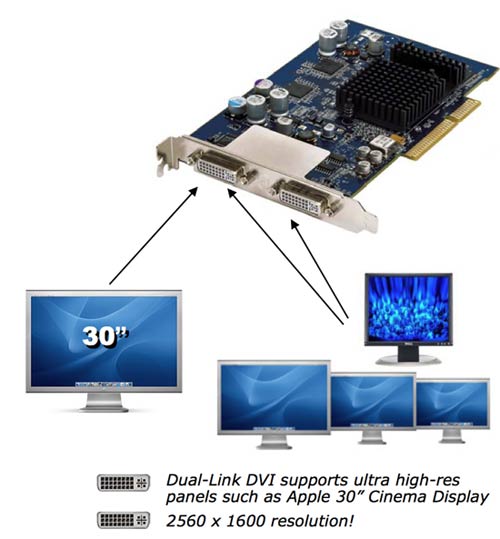 The actual GPU isn't any different than what we've had on the Mac and PC side for a while; it still runs at 400MHz like the OEM Radeon 9600XT and 9650.  The memory clock is 270MHz (effectively 540MHz), which is identical to the Radeon 9650 that ships with newer Power Macs, but slower than the 620MHz memory clock of the OEM Radeon 9600XT that used to ship with Power Macs.   All of the 96xx line feature a 128-bit wide memory bus, meaning that the new card offers 8.6GB/s of memory bandwidth.  Note that the original Radeon 9600 Pro for the PC had a 600MHz memory clock, so this card takes a step back from older PC cards.

With the RV350 GPU at its heart, the Radeon 9600 Pro Mac & PC Edition isn't a card for those looking for ridiculously high frame rates in games. Instead, it is for those users who want a video card for everything but games.  In particular, the 256MB frame buffer of this card is one of its biggest selling features.  At the 2560 x 1600 native resolution of the 30" Cinema Display, 256MB of local frame buffer is necessary to avoid swapping to system memory when you have a lot going on in OS X.  In fact, the general UI performance of the 256MB Radeon 9600 Pro Mac & PC Edition is identical to that of a Radeon X800 XT Mac Edition, even when running on a 30" Cinema Display at native resolution.  So, for those who don't need the gaming performance of a X800 XT, the new 9600 Pro gives you the same 256MB of memory, but at a lower price point.

Like ATI's other 96xx Mac offerings, the 9600 Pro Mac & PC Edition is entirely passively cooled, and thus, is silent.  It is quite surprising how much of a difference a GPU fan can make to the overall noise output of a stock G5 system, but it does make a major difference.

ATI is pricing the 9600 Pro Mac & PC Edition at $199, which is rather expensive for a 9600 Pro; the primary reason for the premium is due to the 256MB of memory.  ATI is hoping that retailers will stock this new dual function card much like the rest of their cards; thus, giving everyone easy access to it.  Given ATI's prevalence in retail stores like Frys, Best Buy, Future Shop and CompUSA, we wouldn't be too surprised to find the Radeon 9600 Pro Mac & PC Edition on those stores' shelves in the near future.