by Gary Key on August 15, 2007 3:00 AM EST
37 Comments | Add A Comment
37 Comments
MTRON is a fairly new player in the storage market. In fact, the company was founded less than two years ago in South Korea. They have been on the fast track since with major funding being provided by Hyundai IT Ltd. and Digital First Co., Ltd. They have steered clear of mechanical drive designs and instead have focused their efforts entirely on Solid State Drives (SSD). We have been keeping track of MTRON since the introduction of their first 64GB SSD last year. However, it was their promise of an SSD product with a proprietary controller chipset that would allow it to run with the Raptors that really piqued our interest.

Therefore, we were really excited when our friends at DV Nation contacted us about the recent arrival of the MTRON MSD-S25032 32GB 2.5" product that advertised maximum read speeds of 100 MB/sec, write speeds of 80 MB/sec, and burst speeds up to 150 MB/sec - all that combined with random access speeds of around 0.1ms. These specifications far exceed those of the latest SanDisk and Samsung consumer SSD products that are approaching 67MB/sec read speeds and 45MB/sec write speeds, although these also boast typical average random access times of .12ms.

We were giddy like kids on Christmas morning when the drive arrived and immediately threw it in our new desktop storage test bed to see if these performance claims were true. We have seen some of these SSD products hyped since CES 2007 and yet the drives are just now shipping in any type of volume, and our review samples have only just started arriving. We were somewhat skeptical of the MTRON performance claims also as even Samsung is not committing to 100 MB/sec read rates until sometime next year.

We ran our first theoretical throughput tests and were rewarded with average read speeds in the 75 MB/sec range and write speeds around 67 MB/sec. We ran similar tests with a different program and had slightly lower results. Our first thoughts had us concluding this was another case of marketing hype not meeting up with actual product results so we tried some additional benchmarks. The performance results were very good but still nowhere near the promises. 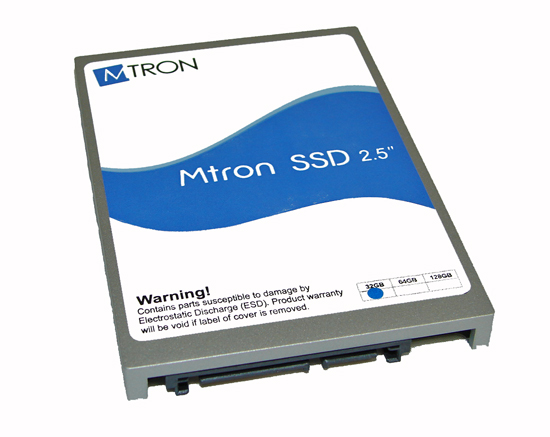 After a few phone calls and several email exchanges, it was suggested that we drop our Intel P35/ICH9R test board and switch over to any of the NVIDIA 680i/650i products. Apparently those whispers we had been hearing about some of the latest Intel chipsets not working at full speed with the latest SSD products were true, or at least it appeared that way. We swapped out the motherboards, loaded a new drive image, and fired up the benchmarks. Sure enough every benchmark we had run to date improved with the NVIDIA 680i board, and we noticed our HD Tach numbers were now close MTRON's performance claims.

This threw a kink into our entire review process as the numbers were way outside the scope of normal benchmark variations. We compared several of our current hard drives and experienced the typical difference of 1%~3% between the two chipsets with the NVIDIA controller being slightly faster in several tests but certainly nothing you would ever notice in actual usage. We tried several P35/ICH9R boards along with a few P965/ICH8R boards with the same results. We are in the process of testing other Intel desktop chipsets, such as the 975X/ICH7R combination, and will start on the notebook chipsets shortly.

While the percentage improvements with the NVIDIA chipset sound significant in several cases, in actual application usage it remains very difficult to discern any differences between the two chipsets. It is like watching Wile E. Coyote chase the Road Runner; he is always close but just cannot match the Road Runner's sheer speed, even though he would be fast enough for most of us. However, with this latest generation of SSD product we would have to suggest using the NVIDIA 680i at this time if you want to extract the best possible performance. Hopefully, Intel will provide us an answer shortly as to why the current ICH9 and ICH8 Southbridges cap the performance of these latest SSD drives to around 80 MB/sec for sustained transfer rates.

Our preview today is based on a limited test suite that is desktop centric in nature. We will follow up shortly with an additional review of this drive in its native configuration for notebooks. At that time we will also present our revised benchmark test suite designed around Windows Vista and actual application usage. The revised storage benchmark suite is also suitable for providing direct comparisons to the new hybrid hard drives that combine NAND flash memory and a mechanical hard drive to offer the best of both worlds - or at least that's the theory. In the meantime, let's take a quick look at this drive and see how it compares to the top performing desktop drive, the venerable Western Digital Raptor 150GB.