What this means is pricing for the fastest Xeons has increased by about $1000, a clear sign that Intel does not expect any competition in the small but profitable high-end x86 market. And indeed, the current AMD "Magny-cours" is targeted at the midrange server market, not the high-end. Bulldozer will be AMD's attempt to take on these new Xeon models, and it probably won't attack this high-end market before the end of the year. 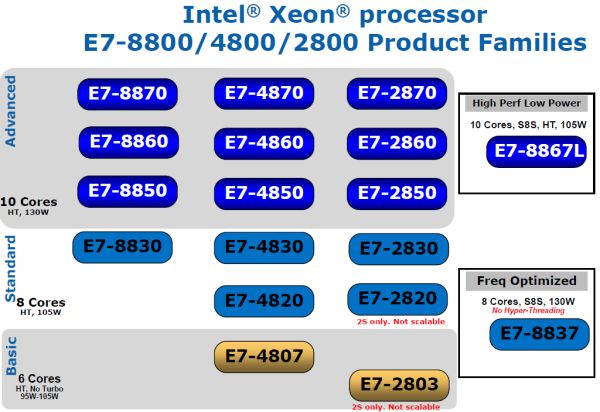 The E7-8837 is another interestin processor. It has eight cores and forgoes Hyper-Threading, so it's like the Nehalem-EX but with a 2.67GHz clock it runs 18% higher than the fastest Nehalem-EX CPUs. Thus, it looks like the 45nm to 32nm transition either delivers two extra cores and a 6% clockspeed increase, or it improves clocks by 18% with the same number of cores. Below is the complete table of new SKUs.

Taken together, the two extra cores (up to 25% more performance) and a 6% clock increase, along with some subtle core improvements, mean the Westmere-EX parts should deliver 20-40% more performance within the same TDP. It's not enough to revolutionize the server space, but more performance per watt is nothing to sneeze at. 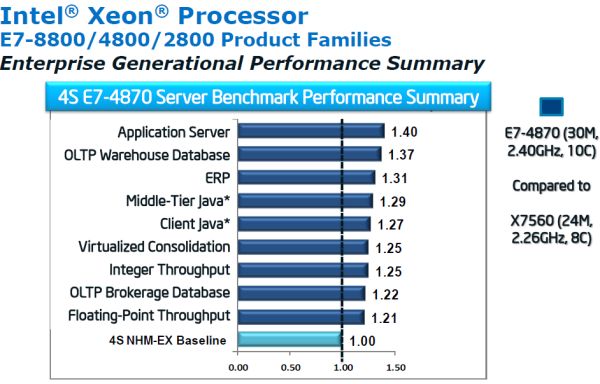