PowerDVD 12 Ultra comes in as a 111 MB compressed setup archive. Installation is fairly straightforward and takes up 327 MB on the disk. Installation of Cyberlink’s social feature, MoovieLive, can be skipped in the setup process. Starting up PowerDVD for the first time after installation gives us the option to set up the media library, but this can always be done at a later stage. PowerDVD provides the option to scan the default media library folders or allows the user to specify them explicitly. 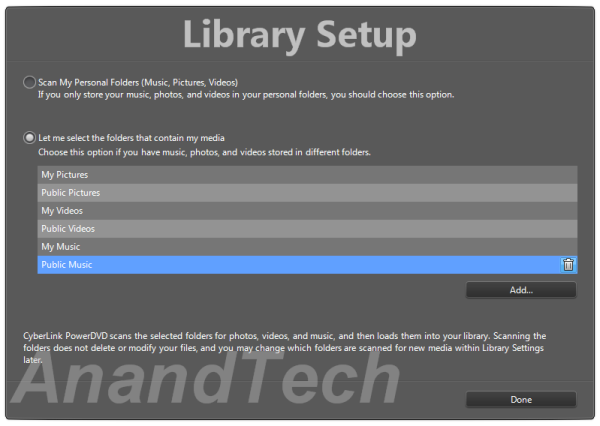 It is also possible to set up a 3D display in the first pass. Options provided include adjustment of 3D depth, swapping first view (left or right eye) and setting up the 3D source format / display type.

PowerDVD 12 installs two services which are set to start when the PC boots up. These services remain active irrespective of whether PowerDVD is running on or not.

PowerDVD also has five processes (including two corresponding to the services) which keep running in the background. These are related to the DLNA functionality offered by the software. This number increases to eight when PowerDVD is playing a disc.

Most users do not want the player to communicate with the Internet unless absolutely necessary. However, even if MoovieLive is skipped during installation some of the features are turned on by default. On first startup, the player fetches a bunch of information about the latest Blu-ray and DVD releases, leading to a cluttered interface. 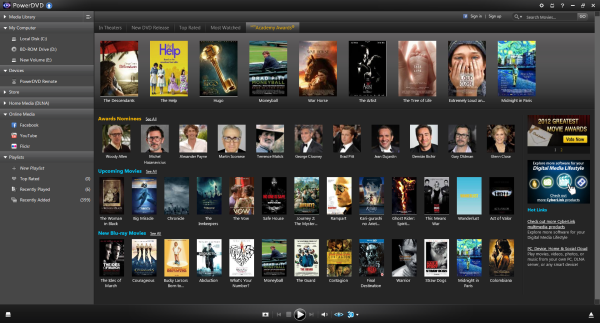 Thankfully, PowerDVD 12 does give the option to turn off this feature in Settings > MoovieLive > MoovieLive Features. Restarting PowerDVD gives us a much cleaner interface. 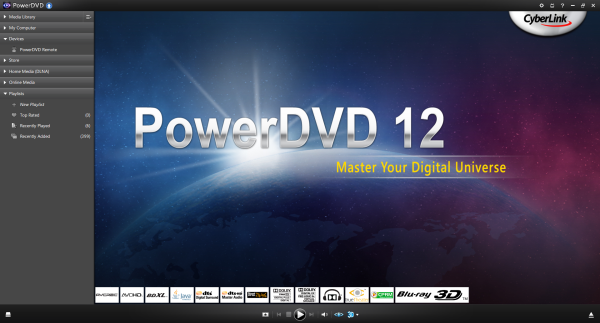 The navigation pane on the left side clearly segregates the different functions. Media Library gives access to various streams in the media library. The media library feature also gives the ability to change the display picture for the folder in the grid view in a seamless manner. Users also have the option to navigate the various local files in the My Computer section. The Devices section provides information necessary to pair a smartphone / tablet remote with the particular PowerDVD instance. It also lists various removable devices (such as USB flash drives) plugged into the computer. 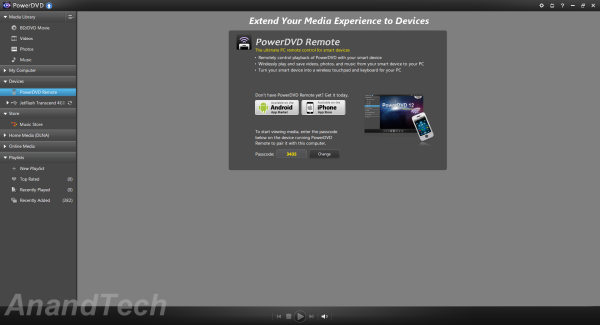 The Home Media (DLNA) section lists and enables access to all the DLNA servers in the network. In particular, it enables easy access to the media available on smartphones and tablets which have PowerDVD Mobile v4 running on them and sharing the media over DLNA.

In addition to the Classic Mode described above, PowerDVD also has a Cinema Mode used for playing back discs (there is no support for local media files in this mode). This can be activated by clicking the TV icon right next to the Settings icon on the top right. It can also be launched from within Windows Media Center. 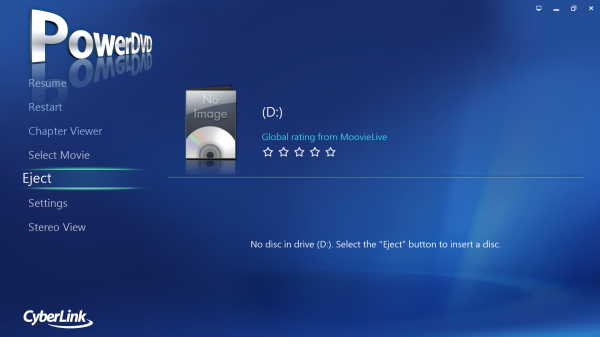 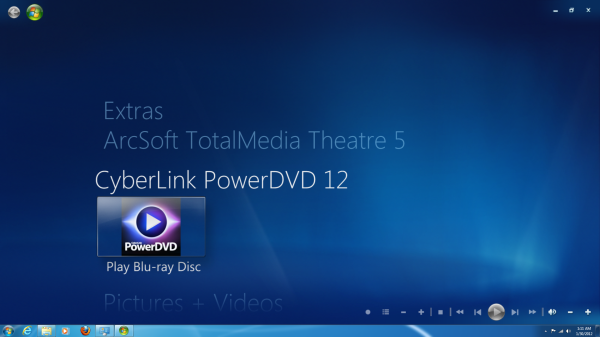 MissingRemote has a nice video of the Cinema Mode in action on YouTube from PowerDVD 11, and this hasn’t changed at all in PowerDVD 12.

We installed the PowerDVD Remote Android app on our HTC Vision smartphone as well as the Motorola Xoom, and came away more than satisfied with the performance and offered features. The gallery below shows the setup process and an overview of the features offered by the Android app.

The most interesting feature was the touchpad functionality, where the smartphone screen could be turned into a mouse pad. The app also offered the facility to input text (and, with the HTC Vision’s slide-out keyboard, this was actually pretty fun to use). These features turned out to be pretty useful in actually navigating around the software without resorting to a HTPC keyboard / mouse combination.

The only drawback that I encountered with the remote was the fact that it doesn’t adapt to the orientation of the device. This is a minor inconvenience, particularly when using the touchpad functionality in the landscape mode on tablets.