As this is still a Transformer, you can purchase an optional Transformer dock in a matching color for the 300: 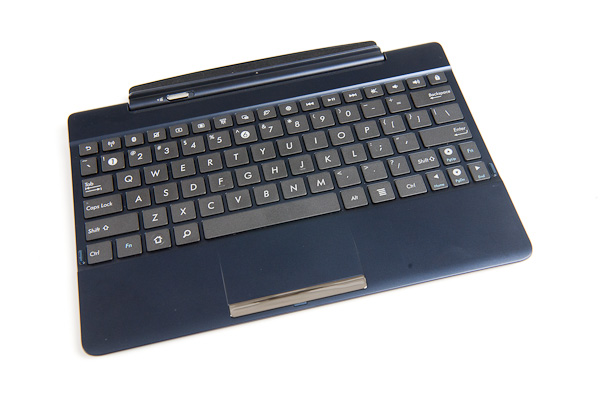 The dock, as always, adds a QWERTY keyboard, trackpad, integrated 16Wh battery, full sized USB 2.0 port and SD card reader. The battery capacity is down from the Prime's dock (22Wh) and as a result extends battery life less than it does in the case of the Prime. I believe we're looking at a classic case of segmentation here, but even so the dock's integrated battery continues to be a brilliant part of the Transformer platform. Not only does it power the keyboard and touchpad but it also charges the 300's battery when docked.

Google has even added support for external batteries like the Transformer Pad's in Ice Cream Sandwich and you'll actually get two battery status indicators, in addition to an animation showing you how one is charging the other. 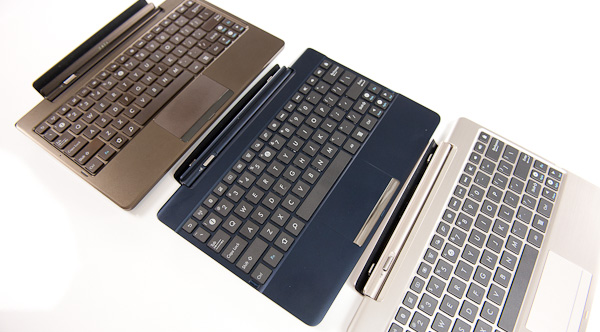 The 300's dock is otherwise nearly identical to the Prime's dock, though it is modified to accommodate the thicker tablet. You can technically use the Prime in the 300's dock but the fit isn't quite secure due to the Prime's thinner form factor. Conversely, the 300 won't fit in the Prime's dock nor the original Transformer's dock - although the actual 40-pin dock connector remains unchanged. The price for the dock is still at $149, identical to what the Prime and original Transformer versions sold for.

The same limitations that came with those older docks apply here as well. With the tablet docked, the contraption is extremely back heavy and can tilt backwards if you're typing on your lap (or any non-flat surface) unless your hands are on the keyboard. The touchpad offers no real protection against accidental taps, although you can disable it via a function key on the keyboard. Although the docked tablet may look like a notebook, the construction isn't quite as solid as an inseparable unibody ultraportable design. The docked TF Pad may look like a Zenbook, but the Zenbook is always going to be more solid (and more expensive) for obvious reasons.

One nitpick I have about the TF Pad 300's dock is the return of the dangling USB port cover. ASUS had something similar on the first Transformer dock, but replaced it with a fully removable rubber stopped for the Prime. On the TF300T, it's back: 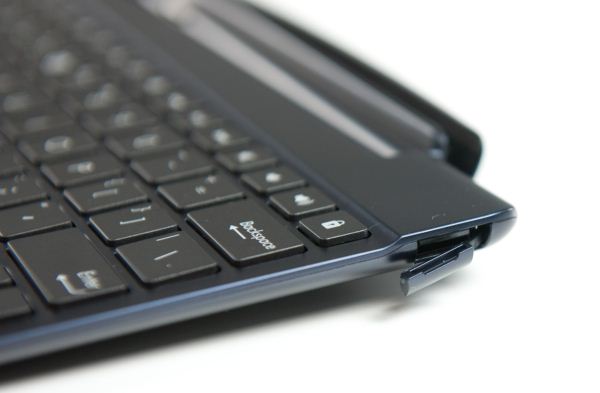 All of that said, the dock continues to be the best route for folks who want to do a ton of typing on their tablet - without giving up the portability and convenience of the tablet form factor. On trips you can choose to carry both pieces or just one if you don't plan on doing a lot of typing. At home you can quickly dock and undock the tablet as you shift between usage modes.

The Transformer Prime's SoC can run a single core at up to 1.4GHz, and 1.3GHz with more than one core active. The Tegra 3 in the Transformer Pad 300 on the other hand runs at a maximum of 1.3GHz (1 core active) or 1.2GHz otherwise. Note that this difference only exists in the maximum performance mode. Running the balanced power profile, the 300 like the Prime before it runs at a maximum of 1.2GHz regardless of number of active cores. In practice I saw the 300 typically top out at 1.1GHz and only rarely peak at 1.2GHz with the balanced power profile active (see: the three power profiles below).

The Prime's clocked its GPU somewhere around 500MHz, however the TF Pad 300's GPU runs around 400MHz.

It's clear that NVIDIA is employing a binning strategy with its Tegra 3 in order to make good use of parts of all yields. The T30 employed in the Transformer Prime ships at nominal clocks, while higher leakage parts (T33) will be used in the upcoming Transformer Pad Infinity that will run at up to 1.6 - 1.7GHz. The lower leakage/lower binning parts (T30L) get used by the Transformer Pad 300, and likely carry a slightly lower cost to ASUS as well.

One advantage the Transformer Pad 300 has internally compared to the TF Prime is its memory. While every single Transformer released thus far has shipped with 1GB of RAM, the 300 is the first to use 1.5V DDR3-667. The TF Prime used 1.5V DDR2-500 as far as I can tell. Don't expect any power savings from the new DRAM, but I believe this is a precursor to the Transformer Pad Infinity with its higher memory bandwidth demands.

I should also add that technically we're reviewing the ASUS Transformer Pad TF300T, the trailing T is for Tegra. ASUS has mentioned that it may introduce 3G and/or LTE equipped versions, the latter would presumably ship with Qualcomm's S4 SoC. 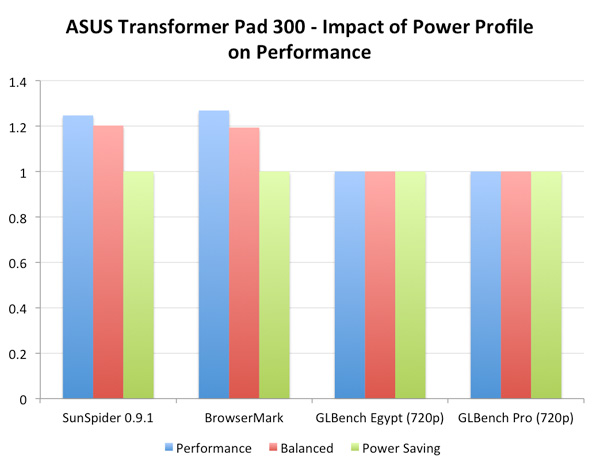 In general, there's no real performance benefit to using Performance mode but a potentially tangible drop in CPU performance if you switch to power saving. The problem with the latter is that you may not save all that much power as max one or two core clocks aren't much lower than they are under Balanced mode (1.0GHz vs. 1.2GHz). We saw this echoed in our battery life results later on.