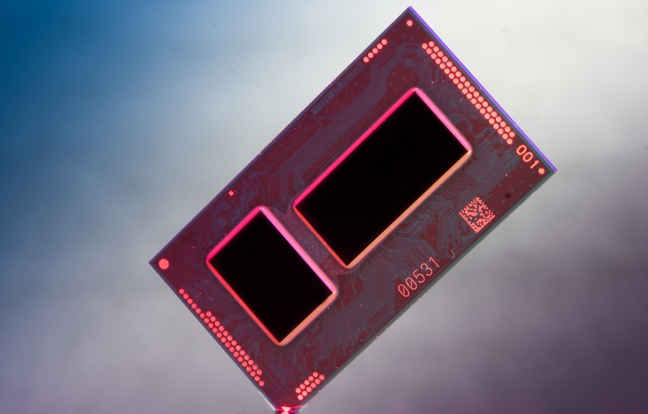 A processor architect can battle between two major opposing principles. The one most of us seem to enjoy is performance, which when taken to the extreme exhibits an all-or-nothing approach. At the other end is low-power operation which has become the main focus of the laptop and notebook market where battery capacity and density is at a premium. The position in the middle of this is efficiency, trying to extract the best of performance and power consumption and provide a product at the end of the day which attempts to satisfy both.

Of course processor architects only have control up to the point where the chips leave the fab, at which point the final product design is in the hands of OEMs, who for various reasons will have their own product design goals. It's this latter point that has resulted in an interesting situation developing around the Core M ecosystem, where due to OEM design goals we've seen the relative performance of Core M devices vary much more than usual. In our tests of some of the Core M notebooks since the beginning of the year, depending on the complexity of the test, the length of time it is running and the device it is in, we have seen cases where devices equipped with the lowest speed grades of the Core M processor are outperforming the highest speed grade processors in similar types of devices, an at-times surprising outcome to say the least.

Never content to leave things alone, we wanted to take a look at the performance in Core M in depth and how device design - particularly cooling design - can significantly impact performance. So for today we will be diving deep into Core M, to see what we can test and what can be said about system design as a whole for the mini-PC, notebook, tablet and 2-in-1 ecosystem.

First, let us loop back to the design of Core M, which historically sits in the ‘Y’ processor stack and goes by the codename Broadwell-Y. Core M only comes in dual core flavors with Hyperthreading, with an official TDP of 4.5 watts. Each model comes with 4MB of L3 cache and Intel’s 8th generation of graphics architecture under the designation HD 5300. 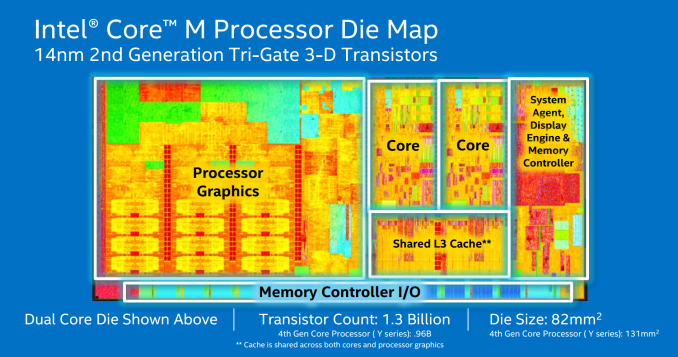 HD 5300 is technically a 24 execution unit design, consisting of a major slice with three sub-slices of eight execution units each. This is double the GT1 / HD (Haswell) design where Intel enables only 12 units (which has benefits when it comes to enhancing yields), or half the full GT3 implementation which keeps the same front end but doubles the major slices. A full on 48-EU design looks something like this, although Core M only has one major slice. 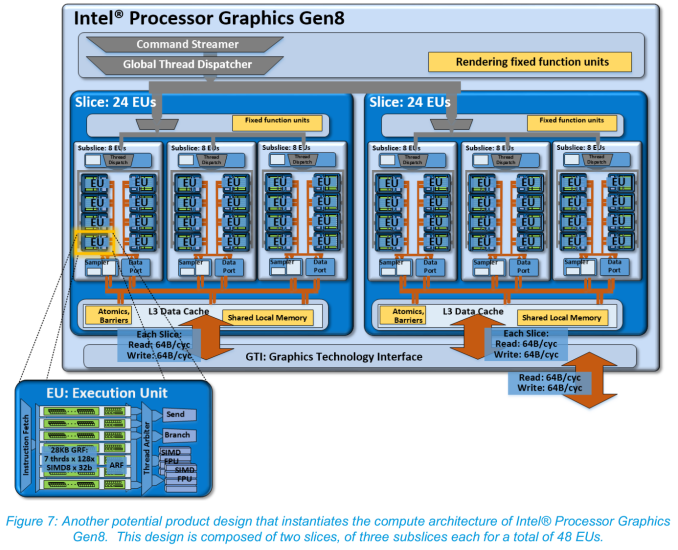 The three main differentiators between each of the SKUs in the Core M line are the processor base frequency, the processor turbo frequency and the integrated graphics frequency range. A number of the processors also support cTDP Up and cTDP Down modes which adjust the base frequency of the processor only. Core M supports Turbo Boost Technology 2.0 which allows individual cores of the silicon to increase in frequency within specified parameters, which may include workload, estimated current/power consumption, and temperature. These two points are key to the rest of the article.

In general, Core M is a small departure from Intel (pun intended), bringing its main Core processor architecture, typically used for big core performance, down to power levels and chip sizes better suited for fanless laptops and tablets. Despite the drop in core counts and frequency to reach 4.5 watts, the Core M line typically has a single threaded performance advantage at this power segment as compared the competition, which is no simple achievement.

For Intel, this 4 to 5 watt TDP window for processors has typically been occupied by the Atom line of integrated SoCs. In 2014 this meant Silvermont cores in a Bay Trail system produced at the 22nm process node, but for 2015 will mean Airmont cores in a Cherry Trail system at 14nm. For most of 2014, Atom competed against high powered ARM SoCs and fit in that mini-PC/tablet to sub 10-inch 2-in-1 area either running Android, Windows RT or the full Windows 8.1 in many of the devices on the market. 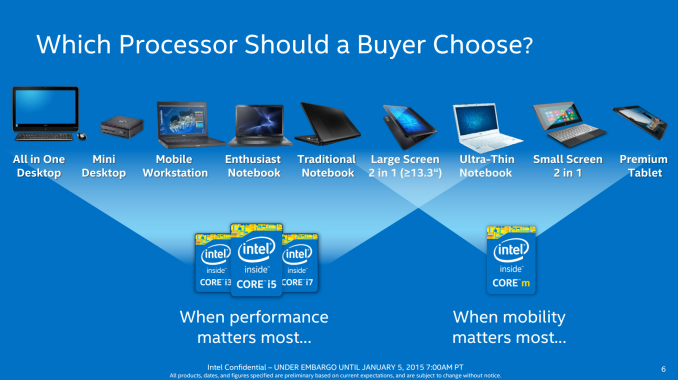 Despite Intel’s initial long cadence with Atom, we are seeing them step up to the plate and provide an iterative cycle that allows for the latest node technologies combined with the updated graphics technology from the integrated Core ecosystem. Nevertheless, Intel has split this 4 to 5 watt TDP segment into two clear formats based on performance and price.

Atom sits at the lower price band ($50-$100 per chip), typically in a dual or quad core arrangement without hyperthreading and uses ‘modules’ of two discrete cores sharing an L2 cache. The integrated IO is designed to be enough for this market segment, as seen in the recently announced Surface 3, and shows that devices in the $500 region are ripe for the next Atom SoCs. Note that Braswell, which also uses Airmont cores at 14nm but goes under the Celeron/Pentium nomenclature, also sits in this 4 to 6 watt region but is aimed more at the mini-PC arena.

Intel lists all of the Core M processors at $281, and a user will be hard pressed to find a Core M device priced under $700 on the market now; such is the gap that Intel wants to strike with the two platforms. Core M sits at the heart of the new Macbook (read our hands on), as well as most of the devices in this test such as the ASUS UX305, Lenovo Yoga 3 Pro and the Dell Venue 11 Pro 7000. With the Broadwell architecture and hyperthreading under its belt, the results do speak for themselves as Core M attacks the Haswell-U line from the last 18 months in terms of direct performance.