The ASUS Maximus VIII Extreme Review: The Other $500 Option

On the back of our last $500 motherboard review, it was clear that a number of readers were surprised that a mainstream motherboard could cost so much. We took the opportunity to ask ASUS why such a thing exists, especially when a high-end desktop platform combination could cost less. The answer is due to the engineering: an ROG motherboard takes twice as long to design and validate, as well as custom ICs and finding the secret sauce to each platform. ASUS said that they have platforms for any budget, but for the users who want to squeeze every last morsel of performance in a mainstream halo budget, they have a product for that as well. That product is the Maximus VIII Extreme, and this is our review.

100-Series Motherboard Reviews:
Prices Correct at time of each review

As we mentioned in the Z170X-Gaming G1 review, for Intel’s Skylake platform, $500 is a large chunk of pie from any PC build, especially as users tend to focus on graphics, processor and/or storage before thinking about the motherboard. The cost of an i7-6700K (~$350 MSRP) plus a $500 motherboard comes in at $850 MSRP, compared to the six-core i7-5820K plus a $250 motherboard which is more around $550 MSRP, meaning that a cost-limited build would be exchanging two cores and $300 for motherboard features. But similar to the high-end Aston Martin One-77, coming in at $1.2 million, there are Astons under six figures. The number of One-77 vehicles sold is comparatively low, but it stands out as a halo product in the range, as does the Gaming G1 and the Maximus VIII Extreme (M8E).

I’ve known some readers to dismiss the car analogy, just because building a computer is different, especially when building a PC is modular whereas a car is purchased pre-built. Typically the Extreme models of ASUS’ ROG line sell rather well with system integrators in pre-built systems who will often pair a selected processor binned for high frequency and water cooling: users buying these systems are not necessarily worrying too much about cost, but are wanting the halo product and pushing it to the limit. 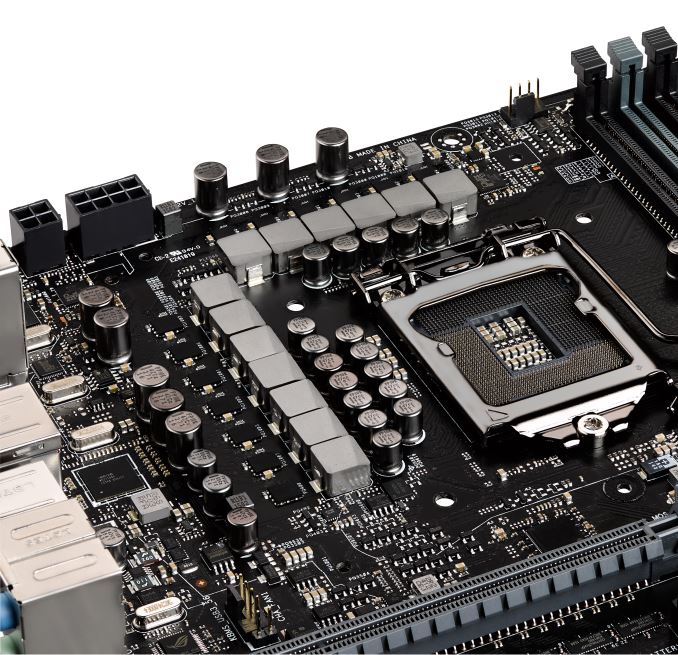 The M8E testing came at an interesting time in our workflow. Having just reviewed the main competition, it was clear that the M8E and Gaming G1 were trading blows with some features: for example, there is no PLX8747 chip on the M8E for tri-SLI support, but it does come with the now perennial OC Panel and tri-stream (3T3R) dual band Wi-Fi. The ASUS comes with a U.2 port, M.2 slot and four USB 3.1 ports, whereas the GIGABYTE gets HDMI 2.0, dual USB 3.1 and dual M.2 slots. The ASUS has custom TPU/EPU chips and an ESS audio DAC, whereas the GIGABYTE has PCIe guard plates and a Creative Core 3D codec and a Burr Brown OPA2132 OP-AMP. ASUS uses an Intel I219-V network port with LANGuard, the GIGABYTE gets dual Killer network points. Both systems are validated with Thunderbolt 3 support. It really does get interesting in the high-end battle as to which features matter the most and who executes the best.

For aesthetics, the M8E moves away from the garish red and black, using a modern grey/black combination using red accents. The use of a rear-IO/audio guard stretching around the motherboard and over the power delivery certainly gives it a feel of bulk, along with the full-length PCIe slots, a U.2 port, and extra ASUS specific hardware features. There’s an RGB LED in the large chipset heatsink for the ROG logo, allowing for some customization.

For performance, we take it in two chunks. For CPU/GPU performance, the use of MultiCore Turbo by default puts the M8E in line with other MCT enabled motherboards. However on the system performance metrics, the M8E breaks some records. DPC Latency sits at 20 microseconds, and is our new record holder (the Maximus VIII Impact had that honor up until now, with 49 microseconds). The audio dynamic range is also top of the charts, and our stripped POST times are top three. Power consumption is mid-range, as is USB performance. But those new DPC and SNR records are hard to ignore, typically coming from optimized firmware, hardware and trace routing. 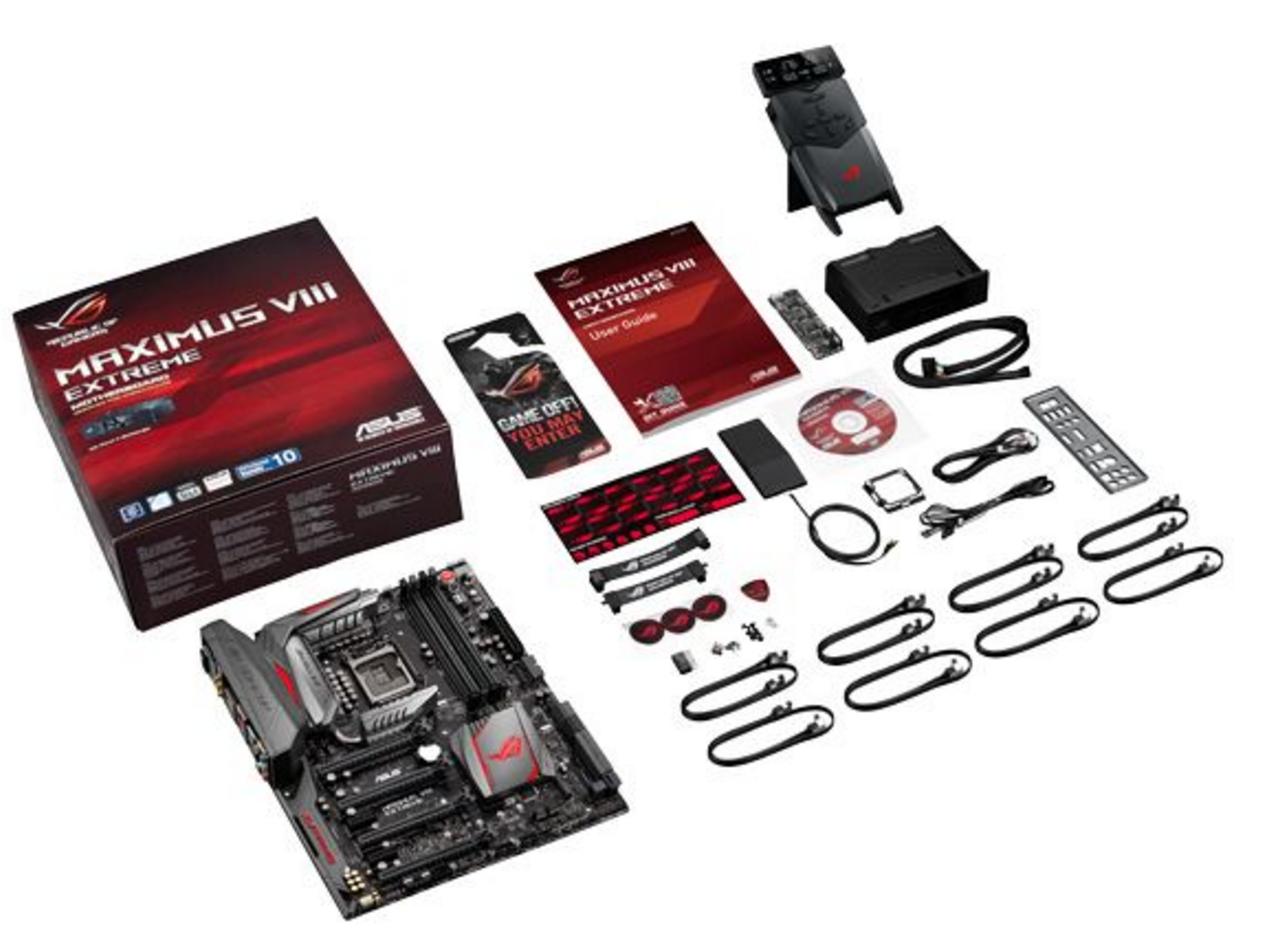 ASUS also still holds a number of cards on the BIOS/Software front, using features like Sonic Stage, a new version of GameFirst IV to allow multi-gate teaming (aka sending data down specific pipes), Keybot, RAMDisk, Sonic Radar, a new PC Cleaner we saw with the Impact, and SSD Secure Erase. AI Suite still remains the centerpiece for Windows software. There is still room for improvement here, especially with the update software.

There are a lot of positive things about the Maximus VIII Extreme, and the typical idioms that surround a $500 motherboard still apply: if a user is in this market, will they use all the features it has to offer? ASUS talks more about its active feature-set (features you interact with) more than the passive features (power delivery, DRAM T-Topology) which are part of the underlying design, because users buy on features. ASUS has argued that the Extreme is for the extreme users who do want everything, and that extra few percentage points of performance. Through our testing, it certainly earns top spot in some important benchmarks.

For our M8E overclocking under BIOS 1101, there are two levels defined by the TPU as well as a Gamers’ OC option in the BIOS. All three of these worked, and gave a good indication of where our manual overclocks should go. One of the main advertised features of the Extreme is going to be the overclockability, especially for extreme users wanting to push memory and processor frequency under liquid nitrogen. ASUS employs several well respected extreme overclockers and former world record holders as part of their ROG design team, allowing designs to be iterated over for better performance. While we don’t test with liquid nitrogen for reviews, our main indication here is trying to get a higher frequency for less voltage, temperature or power.

Both the TPU L1 and Gamer’s OC presets gave a CPU multiplier staggered based on CPU loading, with the latter pushing up to 4.8 GHz on a single thread meaning a high voltage was needed. Interestingly TPU L1 actually decreases performance in our POV-Ray benchmark due to four-core loading being set to 4.1 GHz, whereas at stock settings the CPU implements multi-core turbo, giving 4.2 GHz on all cores. This makes our TPU L1 test more of a declock for fully-threaded workloads.

In our manual overclocks, the Level 7 load line calibration pushed the load voltage above our setting, meaning that the 4.8 GHz stable frequency was sitting at a toasty 1.536 volts. OCCT’s reading software was not much help for quantitative temperature readings, but qualitatively it shows that setting your own voltage for even 4.3 GHz pushes the temperature down from stock frequencies (4.2 GHz).

Compared to the Z170X-Gaming G1, technically the ASUS board hit 4.8 GHz when the GB motherboard only hit 4.7 GHz on the same processor, but this is mainly down to voltage: even at a high LLC, the other motherboard was not applying the full voltage (1.396 volts for 4.7 GHz despite the 1.425 volts setting). At 1.5 volts we were seeing very high temperatures (90C+), meaning that more extreme cooling would be needed to go further. But the M8E applies LLC more aggressively in comparison of the two.

Board Features, In The Box
Tweet
PRINT THIS ARTICLE
Comments Locked