Last year at BUILD I got my first chance to try Hololens. That experience was very interesting, not only because of the potential of Augmented Reality, but because of the entire circus surrounding the device. Last year's Hololens sessions were at a different location, and the groups brought over had to lock up everything electronic. We could only do photos of a unit in a display case. Naturally when Microsoft announced yesterday that Hololens would start shipping to developers yesterday, this years' experience could never be as secret.

So when we got to the demo location, and were given keys for a locker, I was a bit taken aback. But it wasn’t anything as sinister this time, only a way to make sure there were no backpacks on the floor as tripping hazards, because this year’s untethered experience was really untethered.

That comes a bit later though. This year’s demo involved building and deploying a 3D app using Unity and Visual Studio, and each person doing the demo also got a coach to help solve any issues on the way. The Hololens unit was slightly different this year, but looking at it, it was remarkably similar to last year’s demo version. The one big change this year was very welcome: instead of having a person physically measure the inter-pupillary distance on your head (the distance between your pupils), the experience is now handled through software when you first put the headset on. There is a quick calibration that you can run and it sets your eye position based on some air tap gestures. It was very quick and easy, and the set walks you through everything required with voice and visual cues.

Afterwards we sat down building our apps. Since this was a demo for press, all of the coding was done ahead of time and we just had to walk through adding scripts in Unity to set up the demo. We would then build them, and deploy to a remote machine using the IP address of the Hololens.

The demo app itself was of an energy ball which, when locked to a location in space, would open up and show some nifty effects. The experience was very basic compared to what I would expect of the retail apps, but this was a simple demo and it worked well.

The very interesting bit was later on, when we linked our Hololens units with the other people in our six-person pods. This way all six people could interact with a single energy ball. People also got to choose an avatar which would float over their heads. That experience was pretty amazing. With very little setup, the holograms were truly linked to a single point that all people could see.

As part of this demo, my coach suggested I walk around the (very large) room and then look back. This was probably the most amazing part of the demo. After walking a hundred feet or more away, and around some tables and pillars, I looked back and the hologram was still floating exactly where I left it. The ability to really lock things to a location is really the one part that needs to be perfect for this experience to work, and they really nailed it. In addition, my pod mates were all around the room with avatars floating over their heads.

After a night to think about it, I want to summarize my thoughts after using the both the previous and latest incarnation of the Hololens. The field of view issue is still there, and is clearly not something they were able to address before they shipped to developers. I would explain it as something like a mid-sized television, in the 27-inch range, sitting a few feet away from you. My experience was better this time because there were fewer software issues, but the small field of view can certainly take some getting used to.

The hardware itself was very easy to put on and adjust, and it was fairly well balanced in that I never felt like the unit was heavier on the front where the lenses are. The adjustment is done with a wheel on the back, much like a welding helmet if you’ve ever seen one of those. The right side has buttons for volume, and the left side has buttons for brightness. I had to crank up the audio quite a bit because of the loud room we were in, and although the audio was spatial, it was hard to get a sense of that with the commotion going on during the demos. Meanwhile, although I don’t wear glasses, it looked like there would be no issues wearing glasses with the Hololens, and several of the other attendees seemed to have no issues putting the device on and using it with them.

The experience of AR is much different than VR. Because you are interacting with things in real space, you can easily move around without fear of tripping or walking into a wall. VR is able to offer much more complex graphics and immersion right now, but you are largely bound to a single location. The use cases for AR seem, to me, to be not necessarily the same as VR and both should easily be able to co-exist. 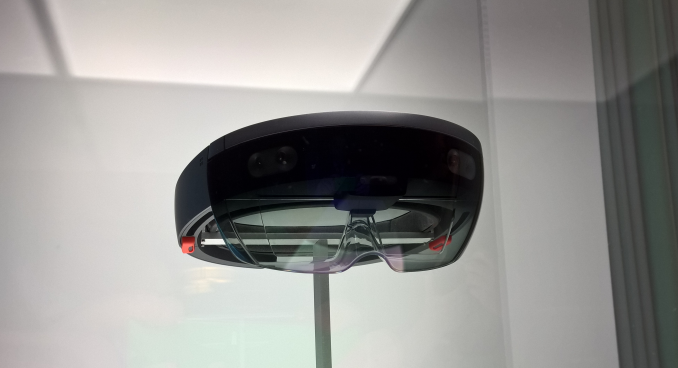 While going through my demo session, I asked my coach how to close the app we were running, and he showed me a “bloom” gesture which closes it. Once I did that, I was in another mode for the Hololens where I could see how it mapped out the physical world with polygons by tapping my finger in a direction. This was amazing and the Hololens did a great job on picking up everything in my area, including the people, with no issues.

Another bloom then put me back at the start screen. On the demo units, this was pretty sparse, but I was able to go into the settings and play around. I didn’t see anything special in there, otherwise the process of interacting with the menus was very simple and was very easy to get used to. From a UI aspect, the Hololens did very well.

Towards the end of the demo session we did some shooting of orbs which opened up a hole in the floor. Peering down into it, it really felt like this was something you didn’t want to step into. The holograms tend to be a bit translucent, but on this one in particular it was much more solid. There’s a lot of untapped potential here and I hope to get a chance to do some of the other demos they have here to get a better feel for that. The headset itself seemed to be near the edges of its processing power on the final demo though, which had a lot of not very complex polygons moving around, and the six people interacting. There was a lot of things to keep track of, as well as quite a few holograms flying around.

Afterwards, Microsoft told us that all of the code that we used in the demo, and all of the code used on the demos last year, is now available on GitHub to allow devs quicker access to code.

I think the Hololens is still one of the most interesting pieces of tech I’ve used in a long time. There is a lot of potential here for education, training, and even tasks like painting your house and trying different color samples. There are quite a few applications where this would work very well. 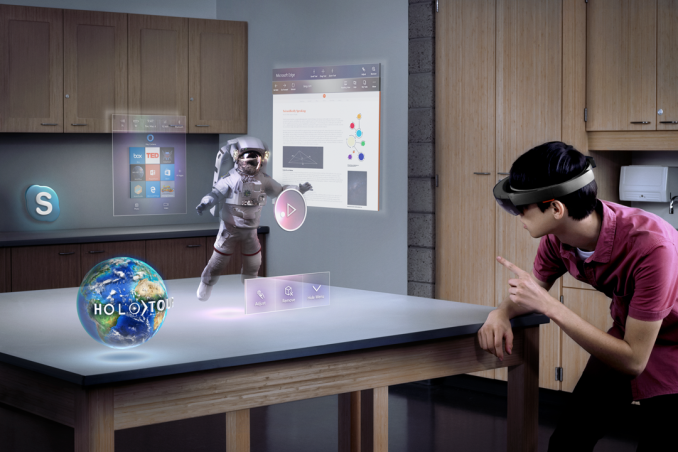 The hardware though still needs a bit of work. It is a bit bulky, and the lenses would not stay anchored to the spot in front of me where I set them, so I had to readjust. The field of view is also not very large, and this could be because the processing power is not as powerful as the tethered experiences of VR.

I look forward to seeing where this goes in the future. A lot of the pieces are already well done and on the software side, the experience is very good. With a bit better hardware, which will almost certainly come with time, this is going to be a very powerful tool from Microsoft.