Our review kit came with four different components - the two main units, a fit-Uptime UPS and the heat-sink. The gallery below shows their different external aspects. The fit-Uptime contains a 18Wh Li-Po (lithium-polymer) battery that can deliver up to 60W (12V @ 5A) of power in case of power input failure. It needs an input of 12V @ 1A minimum to recharge itself. The aspect I like most about the fit-Uptime as well as the power adapter bundled with the fitlet units is the notch on the power delivery pin. Inserting it into the power input of the fitlet and twisting it around ensures that the power cord can never be accidentally yanked away from the PC. Obviously, the fit-Uptime is not network or USB-capable. Hence, it is not possible to determine how much charge is remaining in the internal battery at any point of time. Additionally, the target PC has no idea whether it is running on the mains or the fit-Uptime. However, this is not a concern if power failure is accidental / of short duration.

Despite the top lid being aluminum, the front and rear panels are made of plastic. Unfortunately, this makes the unit feel a little cheap in hand, but, as we found out later, it doesn't affect the thermal performance of the unit. On the front panel, we have the power button with a LED indicator, a USB 3.0 and two USB 2.0 ports, a micro-SD slot and 3.5mm audio jacks (surprisingly, not a combo audio jack, but separate ones for the headphone and microphone). One of the side panels is an extension of the top lid, and helps in securing it to the rest of the system. The rear panel has one USB 2.0 and one USB 3.0 port, two HDMI 1.4a ports and a RJ-45 port. A COM port is also available, and a serial port adapter is supplied along with the main unit. The other side panel is the face of the FACET card, and, in our case, it has the three extra LAN ports.

Getting into the internals of the unit is fairly simple, and Compulab even has video instructions for the same. Removing the bottom panel of our review unit revealed the back side of the FC-LAN FACET card. Underneath the top panel, we have a big chunk of metal covering the SoC. Though this metal chunk does come in contact with the top panel, there is no thermal paste involved. The SODIMM slot is also found under the top panel.

Moving back to the other side of the board, we find that it is easy to slide out the FACET card. This reveals a metal plate to create isolation between the mSATA card and the FC-LAN card. The CMOS battery as well as the micro-SIM slot are also accessible on this side. Changing the mSATA card is also fairly trivial, and involves the removal of just a couple of screws (one attaching the mSATA card to the metal plate, and another securing it to the motherboard). The gallery below shows our disassembly process, as well as the replacement of the original lid with the finned heat-sink version.

The block diagram of the motherboard with details of the I/O distribution is shown below. 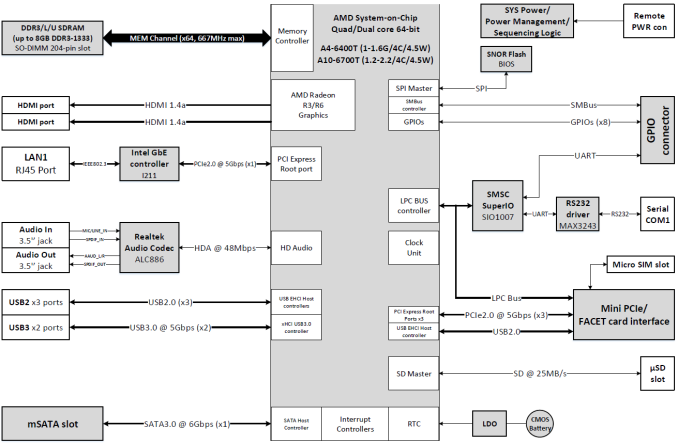 The AMI BIOS has plenty of configuration tweaks available. The most important is the configurable TDP. This can be set between 1mW and 25W. Setting it to the maximum value is equivalent to completely unlocking the TDP limitations. By default, these values are set to 4500. However, both our units were configured for unlocked TDP. Compulab indicated that their currently shipping thermal solution is good enough to safely set the APU TDP to 25W. 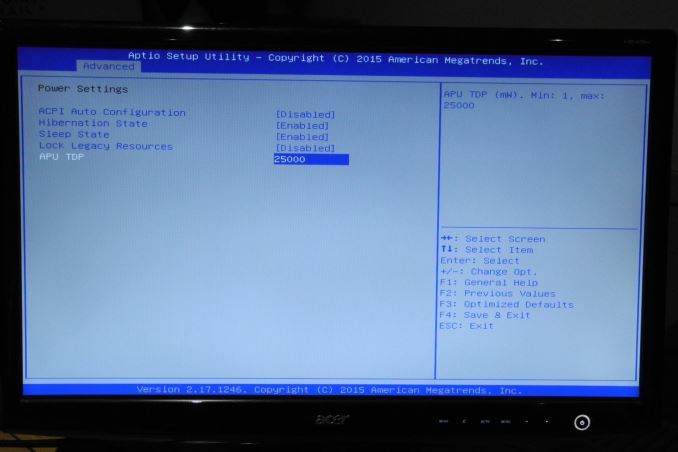 Other configurable aspects include the memory dedicated to the GPU, SDIO access mode, fast boot configuration and security options (including key management for secure boot).