The Thunder3 PCIe SSD was formatted in exFAT before being subject to our benchmarking routine. In order to evaluate the DAS aspect of the unit, we utilized the testbed outlined in the table below to test the performance.

Our testing methodology for DAS units takes into consideration the usual use-case for such devices. The most common usage scenario is transfer of large amounts of photos and videos to and from the unit. The other usage scenario (particularly for multimedia-editing professionals that are the target market for the Thunder3 PCIe SSD) is importing files directly off the DAS into a multimedia editing program such as Adobe Photoshop. Prior to taking a look at the real-life benchmarks, we first check what ATTO and CrystalDiskMark have to report for the Thunder3 PCIe SSD. We see numbers around 2500 MBps for sequential transfers, correlating well with AKiTiO's performance claims. 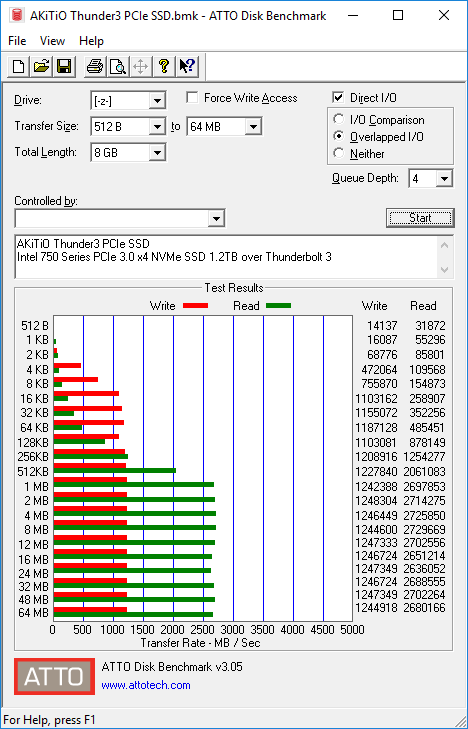 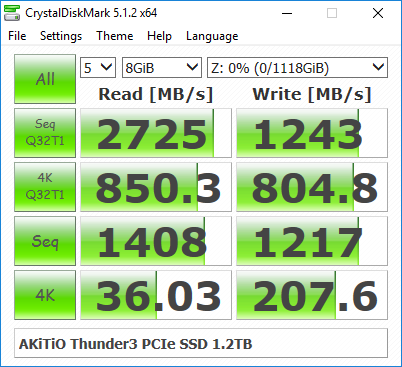 Usually, PC Mark 8 reports time to complete the trace, but the detailed log report has the read and write bandwidth figures which we present in our performance graphs. Note that the bandwidth number reported in the results don't involve idle time compression.

Some context to the above numbers can be gathered from our last DAS review with the benchmark numbers presented using graphs. Given that the PCIe SSD simply leaves those USB drives in the dust, and the fact that the interface is different, we decided it would not be an apples-to-apples comparison if the numbers were to be presented / compared in the same set of graphs.