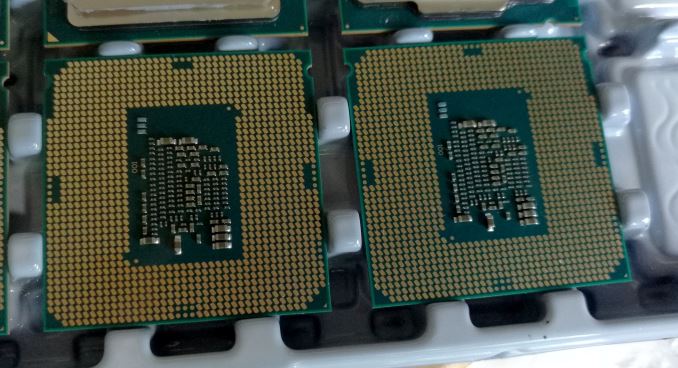 Out of every generation of Intel processors, the headline acts are the high core count parts, the ones with a high-frequency or the most expensive models. Of course, any manufacturer that has a high performing halo product will want that story out of the door on day one, but for typical user sales, it is the mid-range that is more relevant. The Intel Core i3 line comes without any Turbo, offering a flat frequency at load, and is synonymous with dual-core configurations with hyperthreading. In this review, we test three of the Core i3 processors, the i3-6100, the  i3-6300  and i3-6320, all of which are set at a 51W thermal design power.

Intel’s mainstream desktop processor line, using the latest Skylake microarchitecture, currently sits at 30 different socketable processors. Most of these are available for purchase for system builds, although some of the lower power/specialized parts will be found in OEM systems only or select customers. These processors are subdivided into five ‘families’, with broad ranging feature sets designed to increase as we move through the stack.

The Core i3 processors are the lowest specification of the range to enable AVX 2.0, indicating that AVX is a ‘Core’ feature, over a Pentium or Celeron. Similarly, MPX (Memory Protection Extensions) is only on Core i3 and up. By contrast, transactional extensions are not on the Core i3 models, and are only available on Core i5 and above.

What makes the i3 line a little different to most is the L3 cache variation within the family. Typically the more cache a processor has (or the higher associativity of the cache), and the more cache that a processor has at lower levels, the less important the speed of higher cache/memory levels become. Low levels of cache are typically expensive SRAMs that also take up die area that might be better suited for lower latency logic, hence why we have a tiered cache system rather than just gigabytes of L1 cache.

Core i3 processors either come with 3 MB or 4 MB of L3 cache. This will mean that, as a general rule of thumb, the processors with 4 MB will have to access main memory fewer times, and can hold more data closer to the core logic. This keeps the processors working as much as possible, and should afford obvious benefits in benchmarks where the data cannot fit as easily into cache.

Processors with names that start i3-63xx will have 4MB of L3 cache, whereas the i3-61xx variants only have 3MB, except the Core i3-6100TE which has 4 MB. As confusing as that is, here’s a full table of every LGA1151 socketable Skylake processor released/announced:

Originally Turbo mode was introduced in order to be able to push the frequency of a single core (or two) when the software only uses a small number of threads. This allows for extra performance while still keeping within the TDP of the processor. The Core i3 processors do not have a turbo mode by design: when any of the possible threads are in action, the processor will run the cores at the rated base frequency on the box. This should allow for more repeatable results in benchmarks, as long as background tasks do not interfere with the CPU time of a small number of cores.

The pricing of the Skylake processors is such that moving up from a lower family to a higher family is a sufficient jump in price, and there is no overlap. Moving from a Core i3 to a Core i5 for example, is a minimum $23 (from $158 for a boxed i3-6320 to $182 for the i5-6400) for more cache and more physical cores, albeit with the same number of threads and lower core frequencies. 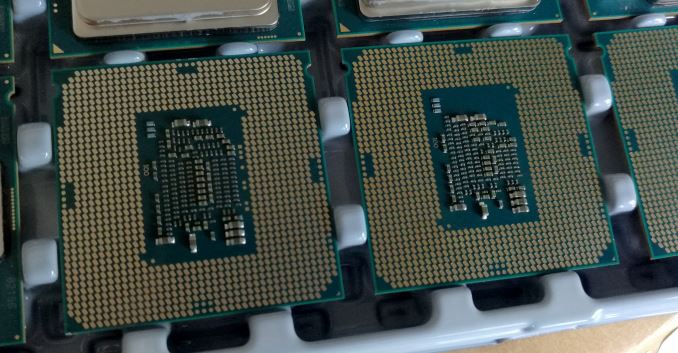 Looking at the rear of the processors, the lower power Core i3-6100TE, compared to the others (6100/6300/6320 are all the same), has extra capacitors and transistors on the bottom which presumably assist with lower power operation. As the i3-6100TE has a lower frequency to assist with power consumption, the extra components may help shift the efficiency of the processor to nearer the 35W mode. The T/TE variants are typically slightly more expensive than the standard versions, and part of this may be from the additional hardware required.

One could argue that the Core i3 line is aimed at bulk system production where fast response times are important but high compute functions such as video editing are not. The Core i3 is often earmarked as a processor for entry level gaming, providing enough horsepower to drive medium graphics cards at reasonable resolutions without being a bottleneck. This becomes important if more game development engines and studios adapt their programming models to go beyond 2-4 threads or cores.

Users coming into the Core i3 arena may be updating from an older machine, or looking at a fixed budget and trying to get bang-for-buck. Going back to entry level gaming and sub-$800 systems, users will pull out the Core i3 as an example. What will be interesting here is to see if that L3 cache difference between the Core i3-6100 and Core i3-6300 will be significant.

On the other side of the x86 fence is AMD’s A10-7000 and FX-8000 processor lines. As the Core i3 processors are available for $117-$158, this fits in with the several AMD options. Some of the AMD options have the recently released and updated AMD CPU cooler, which we reviewed recently in a stock cooler roundup. Based on our extensive testing, this 'free' cooler adds value to the AMD offerings, which is not always apparent in benchmark data or when comparing price for performance.

And AMD’s slightly older FX line with either six or eight threads, but no IGP:

Putting these together gives the following table:

The FX parts, with more threads, have the deficit of being substantially older parts based on AMD’s Steamroller microarchitecture, while all the AMD parts suffer in terms of power consumption. However, for the extra TDP, there’s an uptick in integrated graphics for the APUs. Also, the AMD parts suffer a noticeable single thread performance deficit, so it will be interesting to see how this plays out on our benchmark suite.

As part of a series of reviews this quarter, we have recently retested a small number of FX processors, as well as the newer A10 processors. The data for these is available in our benchmark database, Bench.

CPUs in this Review

For this review we have tested the Core i3-6100, Core i3-6300 and Core i3-6320 processors from Intel. This builds on our review of the Core i3-6100TE, where we explored overclocking on Core i3. As was apparent in that review, trying to get a motherboard with an older microcode to allow overclocking on a Core i3 is somewhat difficult, and results were not over the moon, so we won’t be producing overclocking numbers for these parts here (and I might have broken the OC motherboard accidentally trying some out-of-the-box thinking). 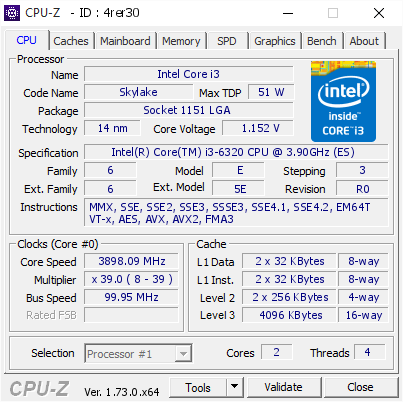 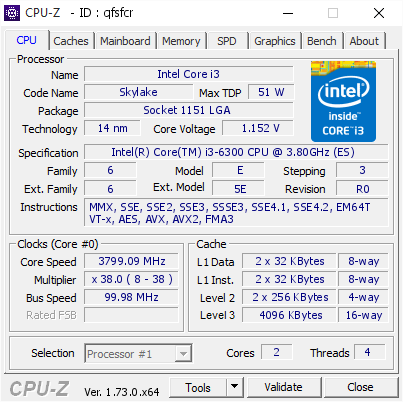 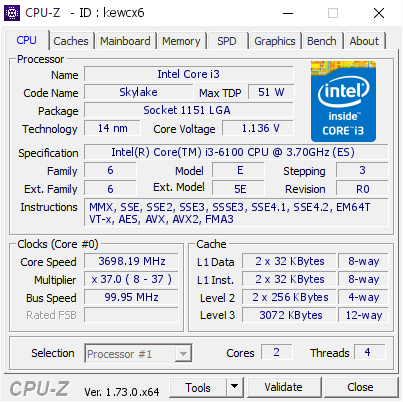 Nonetheless, the landscape for Core i3 should be very interesting. We put these CPUs through our long-form CPU 2015 tests, including our Real World, Office and Professional tests, while the 2016 suite is still being built. The CPUs were also used with five high-caliber gaming titles, with low, mid and high-end GPUs. We then end with the final countdown analysis. Any of the links below will jump straight to the respective page.

Pages In This Review