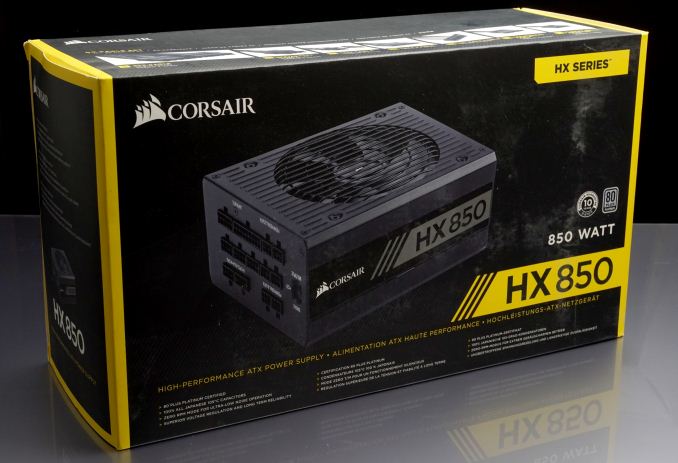 In this review we are having a look at the latest revision of Corsair’s HX PSU series. The main improvements of the new series revision are an improved certification to Platinum, a fully modular design, and now an extended 10-year warranty. We are testing the HX850 model, suitable for 850W which can easily feed a powerful dual GPU gaming/workstation system.

AnandTech tests a good number of power supplies each year, mostly in the popular power ranges (650-850W) with a few reviews now-and-again for small form factor parts or larger behemoths. Here are the power supplies we have reviewed in the last twelve to eighteen months.

Corsair released their first computer power supply units (PSUs) well over a decade ago. The first two units, the HX520W and the HX620W, first hit the store shelves back in 2006. The company has come a long way since then, as today they are one of the most reputable PSU manufacturers, marketing dozens of units through seven different product series. They also are one of the most influential companies, frequently introducing new platforms, upgrades, and innovative technologies. 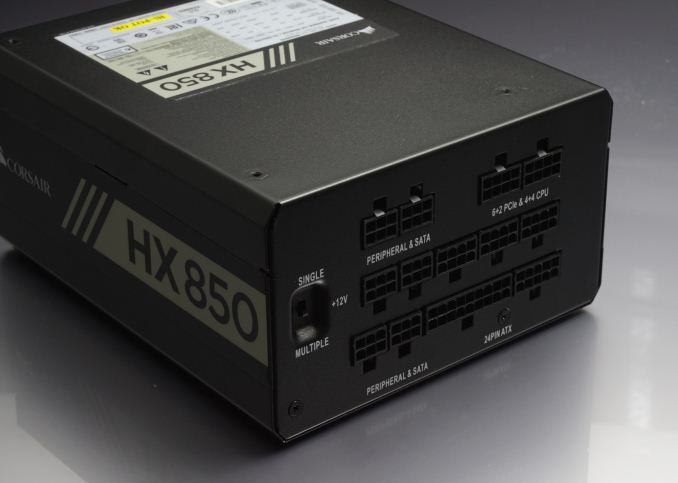 Each of Corsair’s seven PSU series has been developed with a specific market group in mind. The company is constantly upgrading/adapting the products of each series with new revisions, but the specific market group for that series always remains unchanged. For example, their first series, the HX, was developed to target the demanding high-end market. The original HX520W and the HX620W are now but a distant memory, yet the HX series is still targeted towards demanding PC enthusiasts, consisting of eight high output (750-1200 Watt) units with very impressive specifications. 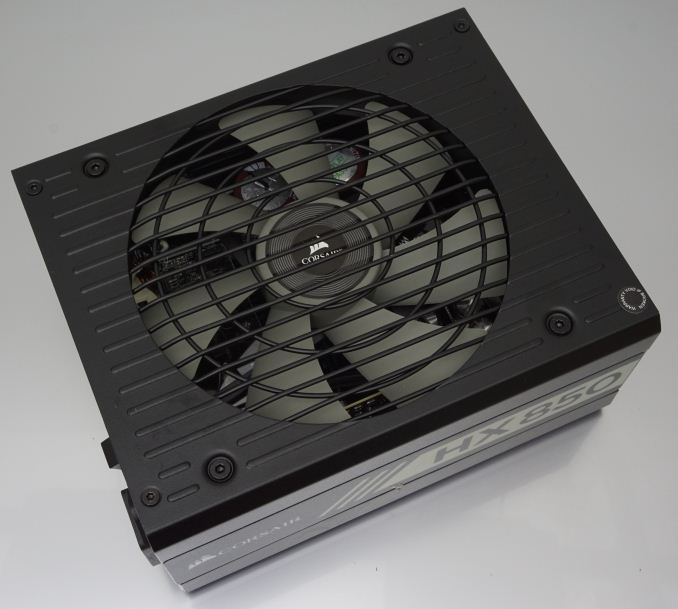 In this review we are having a look at the latest revision of the HX series, the HX850 (CP-9020138). This is the third revision of the 850-Watt HX unit, which was initially released with the first revision back in 2009. The most apparent upgrades of this latest revision are 80Plus Platinum efficiency levels and a fully modular design, plus an improved (10 year) manufacturer’s warranty.

The 135 mm fan responsible for the cooling needs of the HX850 is the Corsair NR135P, a fan we frequently see in the company’s high-performance PSUs. Unfortunately, we cannot identify the OEM of the fan but we can tell that it is a quality model with a fluid dynamic bearing engine for longevity. It has a maximum speed of about 1500 RPM but, considering the unit’s output and efficiency, it is highly unlikely that it will be reaching this speed under normal operating conditions. The HX850 features full range fan control with a passive mode, meaning that the PSU’s thermal circuitry will not even start the fan unless airflow becomes necessary. 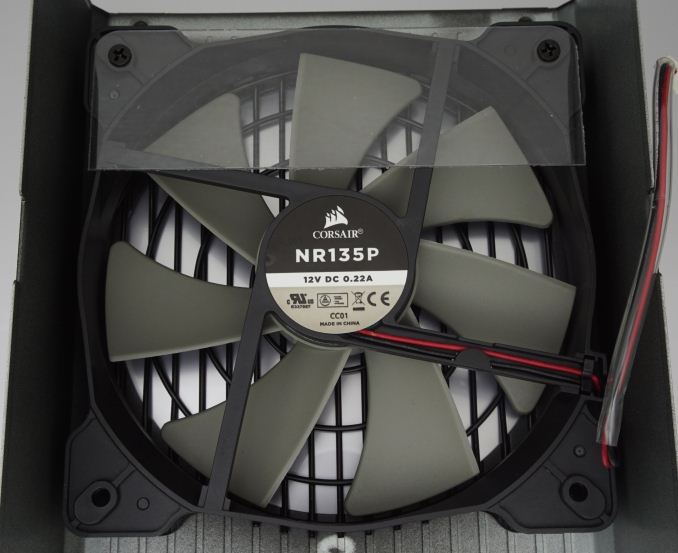 The OEM behind the latest version of the HX850 is Channel Well Technologies (CWT) design, a company that Corsair frequently trusts for their middle and high range products. They have been the OEM behind nearly all the HX series units to this date, with the exception of a few Seasonic designs many years ago. It is an upgrade of the version that the previous HX and RM units were using a few years back. This core design is currently being used for most HX and RM series PSUs, with small variations between the models. 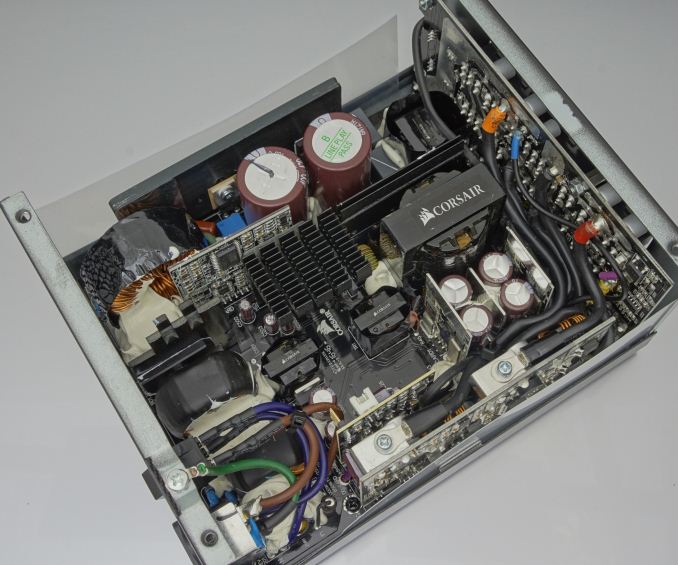 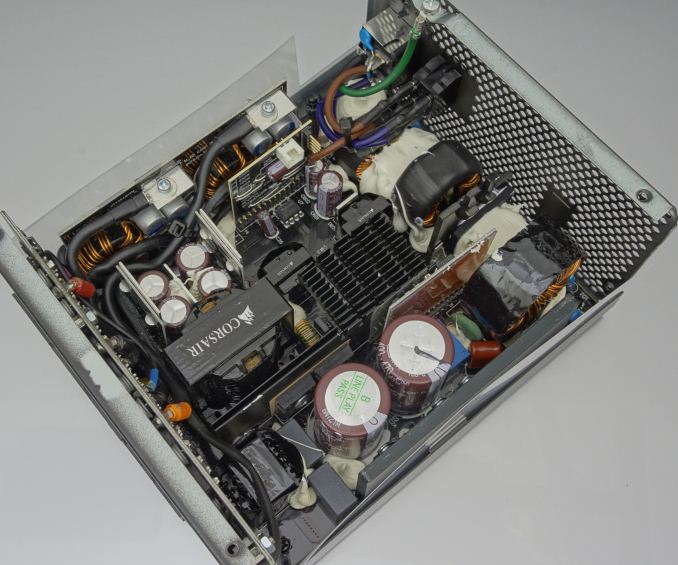 The heatsinks of the HX850 are relatively small, even for an 80 Plus Platinum certified power supply. This is especially true for the secondary side of the PSU, where the heatsinks are small metallic braces with a volume of just a few cubic centimeters. A large portion of the heat dissipation on the secondary side is taking place underneath the PCB, towards the steel body of the unit. The APFC heatsink is thick but plain - essentially just a metallic slab with relatively little dissipation surface. Only the heatsink for the primary inversion circuit stands out, extending to form a small array of fins to increase its dissipation surface. Corsair is apparently placing a lot of faith in the efficiency of their latest design. 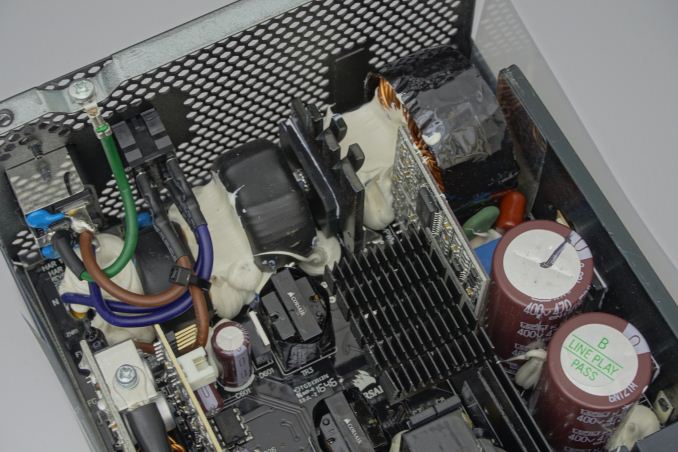 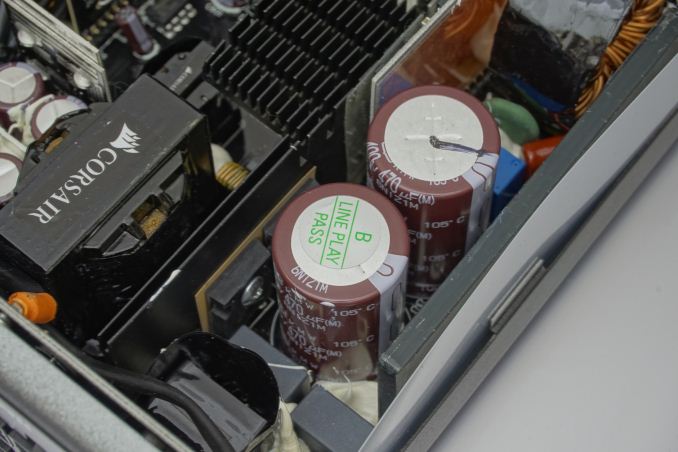 The filtering stage of the HX850 is typical for high output PSUs, with four Y capacitors, two X capacitors, and two filtering inductors. It has two conversion bridges with a small heatsink sandwiched in between them. The passive components of the APFC stage are two 400V / 470μF capacitors supplied by Nippon Chemi-Con and a very large filtering inductor that is partially wrapped into insulation material. The insulation material is probably not used mainly for protection but to prevent electromechanical vibrations that would result in noise (also known as “coil whine”). CWT extends this practice to nearly all the filtering inductors found inside their premium designs. 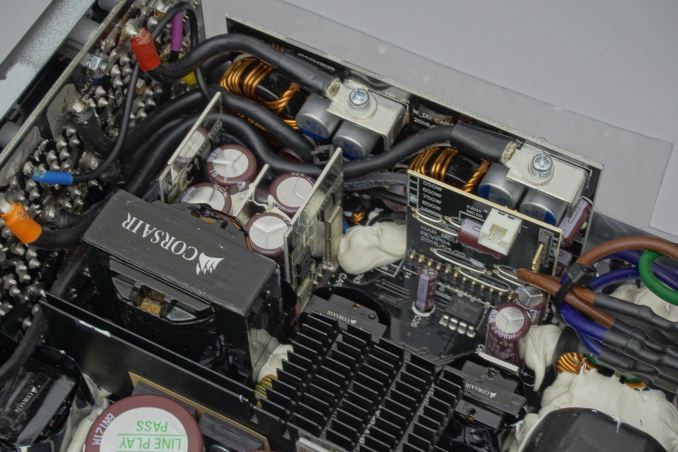 Two MOSFETs form an LLC resonant half-bridge inversion stage, whereas a horde of eight MOSFETs on the secondary side generates the 12V line of the unit. The 3.3V and 5V lines are derived via DC to DC conversion circuits found on the horizontal daughterboard at the edge of the PSU. All of the electrolytic capacitors are supplied by Nippon Chemi-Con, as are nearly all of the polymer capacitors as well. A couple of the polymer capacitors are supplied by Nichicon, ensuring that only capacitors from Japanese companies can be found in the HX850. 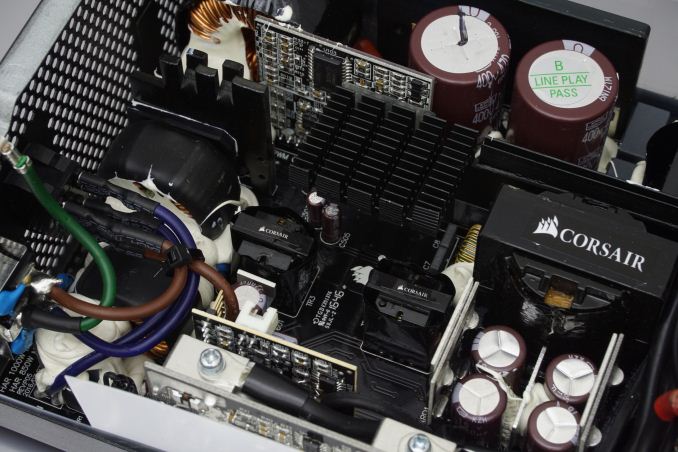