ASUS has really refined their design over the last couple of years, and the ZenBook 3 is a great example of their work. The entire laptop is built out of aluminum, as you’d expect in a premium Ultrabook, and finished in either Royal Blue or Quartz Gray. The finish is nicely textured to provide a comfortable grip as well, but it is a bit of a fingerprint magnet. The compact design is highlighted by the very thin bronze strip on the outside of the display bezel, giving a nice contrast to the color of the finish.

ASUS has jumped on the thin-bezel bandwagon, and the 7.46 mm bezels on the sides really shrink the overall laptop. They’ve not gone quite as thin as Dell, especially on the top, but that does then leave room for the webcam in the proper position at the top of the display. ASUS states the screen-to-body ratio is at 84%. It’s really great to see larger displays like this 14-inch panel put into Ultrabooks that used to be 13.3-inch models. It’s a bit bigger than an XPS 13, but doesn’t feel much bigger thanks to the light weight. 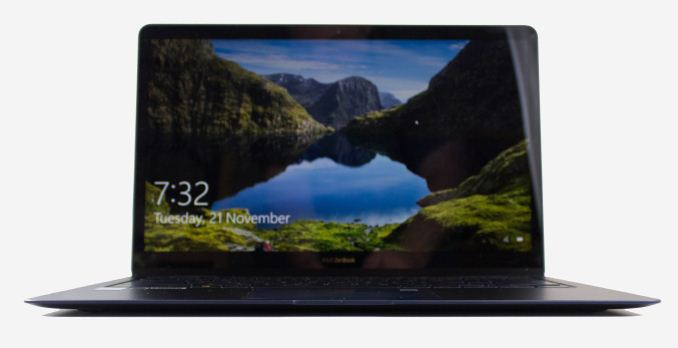 Unlike some of their lower-cost ZenBooks, the ZenBook 3 features a fully backlit keyboard, and although the backlighting is handled by white LEDs, the amber key cap fonts give the keys a great level of contrast without overpowering your eyes in dim lighting. There is three levels of backlighting available. 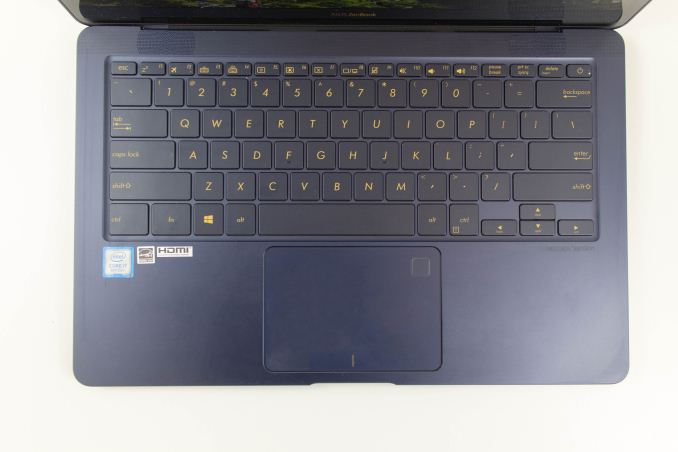 The keyboard itself is pretty standard fare for ASUS, with a six-row keyboard that offers a fairly standard key layout. The arrow keys are half-height, but are separated enough that they work well. The only real concern with the keyboard is something that ASUS has been doing forever, which is placing the power key at the top right corner, above backspace. This can cause you to accidentally shut off the device when trying to correct text, which isn’t ideal. The key feel is decent, for a low-travel thin keyboard. 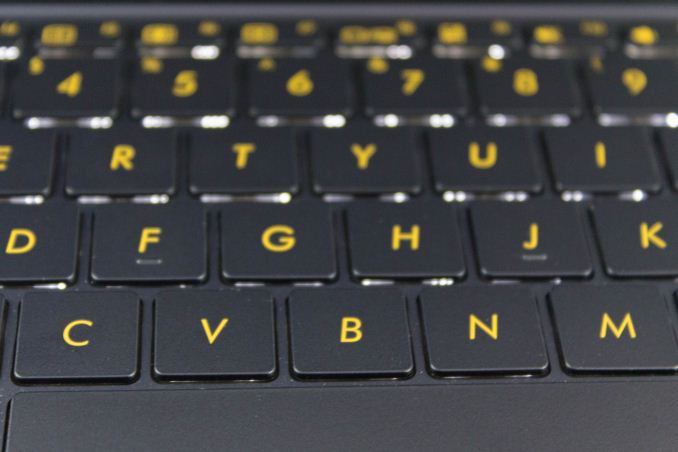 The trackpad is a Precision touchpad, featuring a glass surface. The trackpad is smooth and easy to use, and one of the best ones that ASUS has utilized. ASUS has also gone with a trackpad that features a built-in fingerprint reader, which is located in the top right corner. It’s a capacitive model, and quickly lets you get going with Windows Hello for a password-free login.

As for ports, ASUS has gone all-in on USB-C, outfitting the laptop with only USB-C ports. This is a bit awkward right now, as devices transition to the new, smaller, cable, but is as future-proof as a device can be at the moment. The laptop actually isn't even thick enough to support a USB-A port, so if you do need to access legacy devices you’ll have to use an adapter. Luckily ASUS has also outfitted two of the ports with Thunderbolt 3 support, while the third port is a standard USB 3.1 Gen 1 port, and all three USB-C ports support upstream charging. That means you can charge the ZenBook on any of the three USB-C ports, which is a nice touch, and avoids any confusion for the end-user.

The screen hinge is very nicely done, although you can’t quite open the laptop with one finger, but that’s also due to the light weight of the laptop. Unlike some other ASUS laptops we’ve reviewed, this hinge also doesn’t go over-center, meaning it doesn’t raise the back of the laptop off the desk. It doesn't open all the way to 180° like some devices, but in most scenarios that's not a huge deal for a non-touch laptop.

If you’re after a well-designed laptop, ASUS has really done a great job on the design of the ZenBook 3. It’s thin, light, and offers the modern benefits of a thin bezel and large display, but it does so with the traditional concentric circle aluminum design, and simply looks fantastic.