Toshiba Unveils 10TB HDDs for Video Surveillance: Support for up to 64 HD Streams 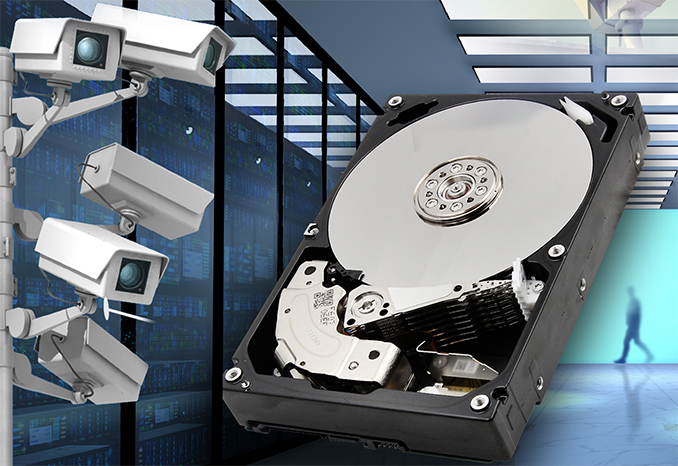 Toshiba has announced its third-generation SV-series hard drives designed for always-on video surveillance applications. The new HDDs can record videos from 64 HD cameras simultaneously, offer up to 10 TB capacity, and offer a considerable increase in the performance-per-dollar metric compared to their direct predecessors due to higher spindle speed and areal density.

The Toshiba MD06ACA-V family of hard drives includes models with 6 TB, 8 TB and 10 TB capacities featuring a 7200 RPM spindle speed, a 256 MB cache buffer, and a SATA 6 Gbps interface. The SV-series HDDs are aimed at various video surveillance applications (SDVR, SNVR, Hybrid SDVR) and therefore support a number of specific enhancements, such as ATA streaming technology and ability to record data from up to 64 HD cameras at once. Surveillance-class HDDs have to quickly wake up from idle and resume work, which these drives support.

Since devices like surveillance digital video recorders and surveillance network video recorders usually contain many hard drives (and to some degree resemble a NAS), Toshiba’s new SV-series HDDs are prepared to work in vibrating multi-drive environments. To a large degree, the new SV-series HDDs from Toshiba rely on the platform originally developed for the enterprise-grade MG06ACA HDDs (which also work in vibrating environments) launched earlier this year. Not all capabilities of the MG06ACA are supported by the MD06ACA-V, but the drives feature top and bottom attached motors, RVFF sensors, second-generation dual-stage actuators, and some other enhancements. Toshiba rates its 3rd generation SV-series HDDs for 180 TB per year and one million hours MTBF, which is considerably below ratings of enterprise hard drives, but is in line with HDDs for surveillance applications from other makers.

When it comes to actual performance, Toshiba’s MD06ACA-V drives resemble their enterprise-grade brethren: a 240-249 MB/s maximum sustained transfer rate, which is natural as the drives use the same PMR platters. Meanwhile, the power consumption of the SV HDDs varies between 7.88 W and 9.48 W, depending on the model, but this is lower compared to the aforementioned enterprise-grade hard drives. It is noteworthy that from the pure performance point of view, the Toshiba’s MD06ACA-V are the fastest HDDs for surveillance applications in the industry. However, since flagship Seagate SkyHawk/SkyHawk AI and WD Purple drives use helium for high-capacity models, their power consumption is tangibly lower when compared to that of Toshiba’s MD06ACA-V.

Since there are a lot of legacy video surveillance systems deployed, and their HDDs are aging, owners may want to upgrade them. Because older systems use outdated software designed for hard drives with 512B sectors, the MD06ACA-V series supports emulation of such sectors and thus the read-modify-write (RMW) operation to align the source write request with the physical sectors on the disk. The SV-series drives do not feature persistent write cache (PWC) with power loss protection (PLP), unlike the more expensive enterprise HDDs.

Samples of Toshiba’s MD06ACA-V hard drives are now available to interested parties. Since the HDDs will be sold primarily to makers of video surveillance systems, Toshiba does not publish any information about pricing of the new drives as it depends on volumes and other factors.