The ASUS ROG Maximus X Apex is a unique looking board, at least the shape. The E-ATX sized motherboard is actually meant to be "X" shaped, with some meat cut out of each side of the board giving it a kind of "X" shape, I guess? From a user practicality standpoint, the cutouts on the right side will help with cable routing as many cases and benching tables have the holes and grommets setup for ATX size. Outside of that, there is not an obvious reason for the cutouts apart from looking that little bit different.

The PCB is black and does have some grey stenciled design in the shape of an X running through the socket area. RGB LEDs are located on the bottom of the board, below the power delivery heatsink, in the ROG 3D printable area below the socket, and the below the chipset heatsink. Most of the motherboard is exposed rather than being covered up by a shroud, but that really isn't expected with this type of board. Personally, I prefer the exposed look rather than a full board covering, but that is my personal preference. 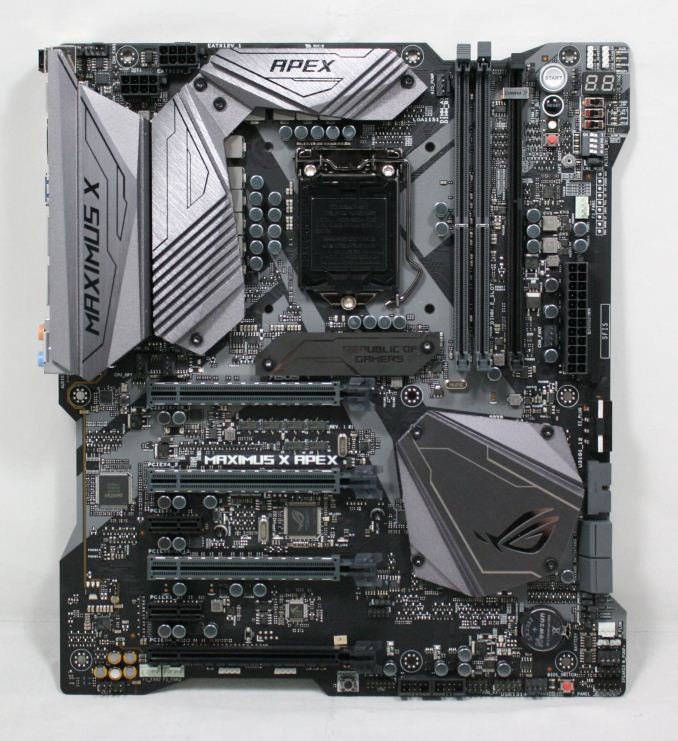 The PCB cutouts are more visible on the back of the motherboard. That being said, when was the last time a user showed off the back of a motherboard? 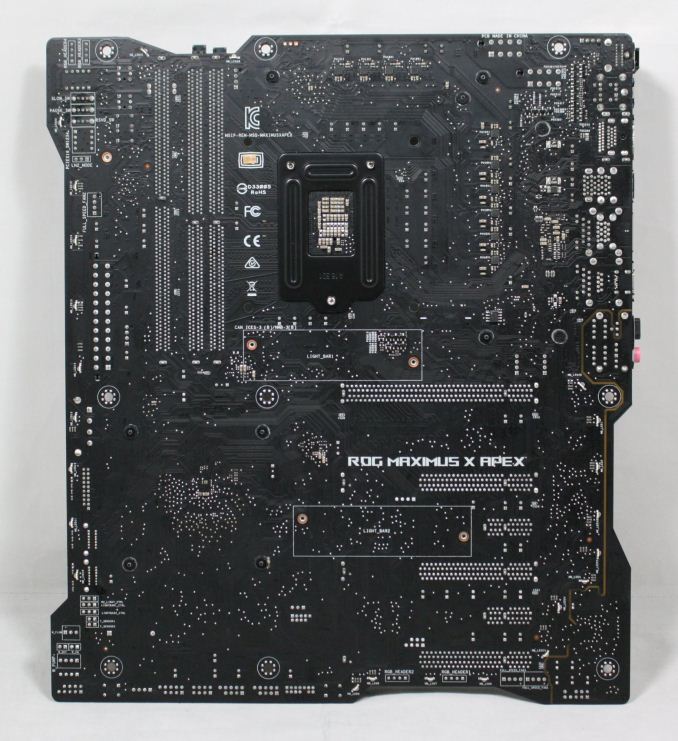 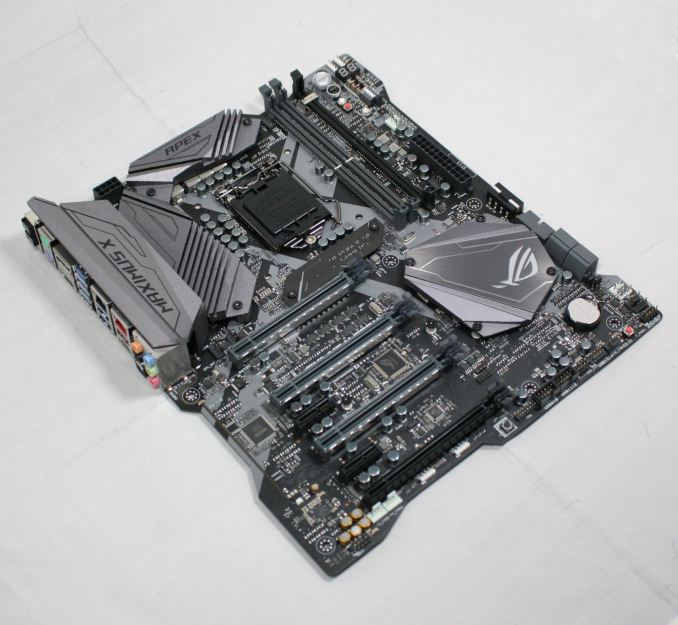 We are able to see a large grey brushed aluminum heatsink covering the power delivery area to keep it cool. The back IO area also has a beefy shroud made out of aluminum though it is mostly aesthetic as it is not making direct contact with the power delivery heatsink, but it does cool the Aquantia 5G chip. The chipset heatsink takes up a fair amount of space and keeps it cool.

Outside of the heatsinks, the board is generally designed to push limits and overclock, so ASUS chose to go with two slots for DRAM instead of the typical four we see on most full-size Z370 boards. This was done in order to optimize the memory trace length which ASUS says improves stability and performance. Also unique to the Apex is the ROG DIMM.2, a vertically-installed dual M.2 expansion card that includes a fan bracket to assist in keeping the M.2 drives cooler below it.

The Apex also has a whopping 10 fan/pump headers on the board along with water flow and in/out water temperature headers which makes the board a pretty comprehensive control center for ambient cooling on either air or water. 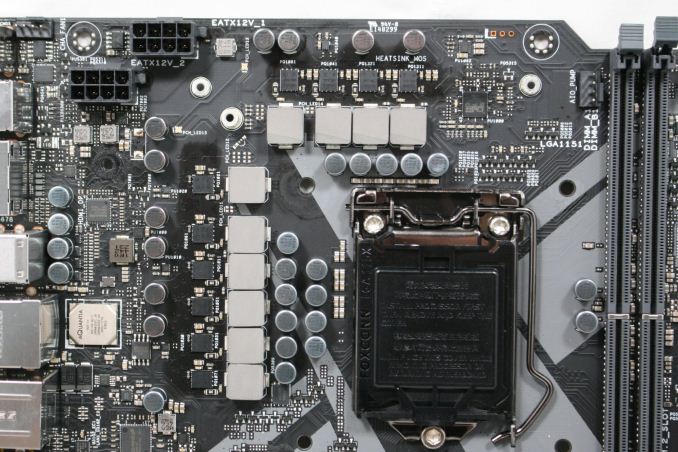 The power delivery area in the Apex is in an 8+2 mode using ASUS's 10K capacitors as well as microfine alloy chokes. Driving these are the ASUS ASP14501 which is set up in a 4+2 phase configuration. Each phase for VCore from the digital PWM has doublers via IR3599 phase doublers. Each doubler outputs to an IR3535 driver which we counted 10 on the backside (2 for iGPU, 8 for CPU). The MOSFETs are Infineon OptimMOS BSG0812ND rated at 50A. The VRMs are fed from two 8-pin EPS 12V connectors (one is optional) found in the upper left-hand corner.

The memory and CPU secondary rails use a two-phase controller for the memory and two N-channel MOSFETs. VCCSA and VCCIO source their power from a Texas Instruments TPS51362 converter and single phase VRM managed by Anpec PWM and PowerPAK MOSFETs. 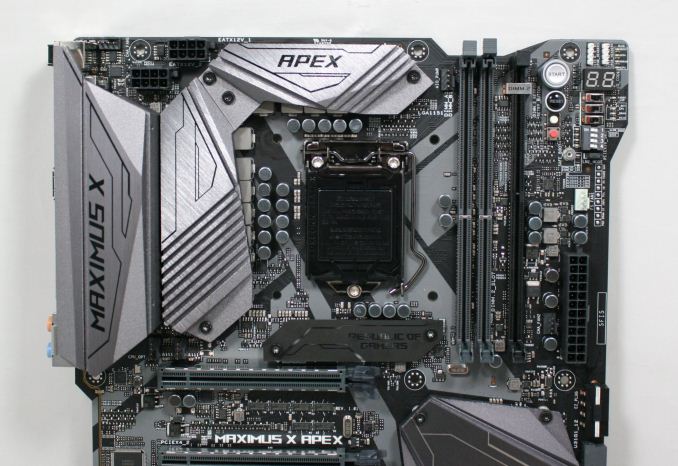 The top half of the board gives us a closer look at the heavy shrouds around the power delivery area and back panel IO. The socket area is fairly busy which can make insulation for sub-ambient overclocking a bit more tedious, trying to jam eraser between the caps and chokes. To the right side we see the two DRAM slots, the DIMM.2 slot as well as all the goodies ASUS added in that upper right-hand corner. Below the CPU socket and above the first PCIe slot is an aesthetic plate which can be customized with a 3D printer. ASUS includes a couple of blanks with the board.

The right side of the board has quite a bit going on. There are fan, temperature and water flow headers, the four SATA ports as well as front panel USB 3.0 header and a Molex connector for additional power to the PCIe slots when running multiple GPUs. Continuing on to the right, we will run into the 24-pin ATX power lead and the FS Fan header. One thing I would liked to have seen on a board of this caliber is a front panel USB 3.1 header as well. 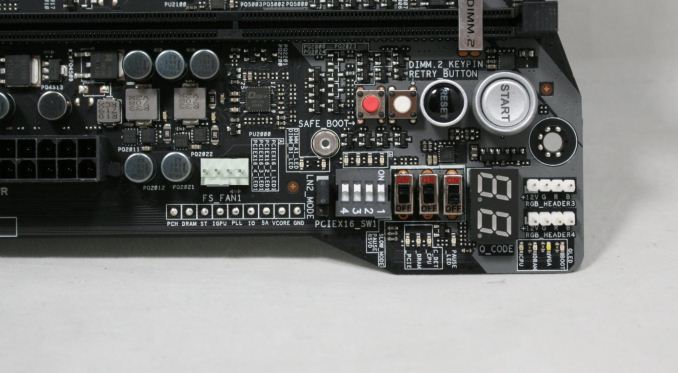 In this upper right-hand corner of the motherboard, pictured above, are a bunch of switches, buttons, and LEDs designed to accomplish a number of things. From the top, we see the circle shaped Start and Reset buttons which sit to the right of more simple retry button (will force a reboot with same settings) and a safe boot function (temporarily applies safe settings to the BIOS in order to boot while still keeping OC settings so they can be adjusted). Below that, on the left, we see a strip of solder circles in order to read voltage directly off the board - a feature great for overclockers. These include VCore, System Agent VCCIO, PLL, iGPU, DRAM, PCH, and Ground read points. To the right of those are an LN2 mode switch used in extreme overclocking to get around cold boot issues, as well as a set of four switches to enable or disable the PCIe slots. The switches to the right are for pause, slow mode, and another reserved for ASUS technicians.

Outside of all that, we can see two (of four total) RGB headers, the Q Code display, and Q LEDs covering Boot (green), VGA (white), DRAM (yellow), and CPU (red). These will stay lit during the boot process if an error is found. Last is a feature for the sub-ambient overclockers in the condensation detection LEDs. These three LEDs will light up when water condensation is detected on three key components - the CPU, DRAM, and PCIe slot. While most will never need this feature, it is a great value-add for the extreme crowd where ice formation, and subsequently melting ice on the motherboard, is quite common.

Zooming in on the SATA area above, we are able to see a total of four SATA ports which is two less than the platform offers from the chipset. Presumably, this is to due to space, and that overclockers rarely use more than one drive anyway. 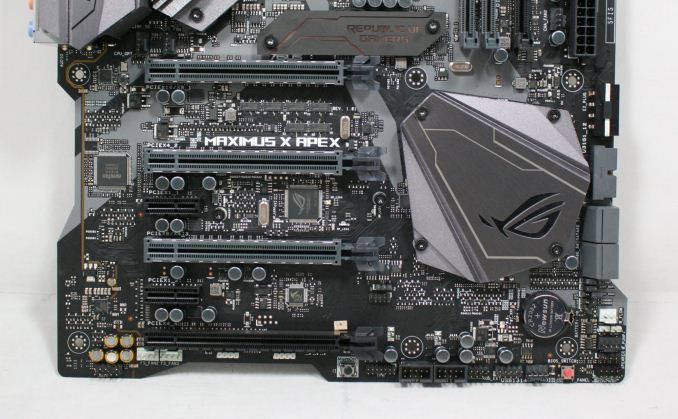 The bottom half of the board consists of the audio portion on the left which has board separation but does not use EMI shielding on the modified Realtek ALC1220. Scattered around the chip are Nichicon Gold series capacitors.

There is a total of six PCIe slots with four full-length and the top three grey ones (also reinforced) pegged for video card duty. You'll notice there are no M.2 slots between the PCIe slots on the board. Both M.2 slots, powered through the chipset, reside on the DIMM.2 add-in-card.

Across the bottom of the board are several other headers and buttons. From left to right we see:

Below is a simplified list of how the PCIe slots will work with each family of CPUs (talking PCIe lanes) when multiple cards are used (the "@" symbol is used to show slot preference for the configuration). PCIe slot numbers are referred to by top-down. In other words, PCIe 1 is the first slot, PCIe 2 below it, and so on.

The back panel IO has a typical assortment of ports, buttons, and plugs with video outputs.

The accessory stack included with the Apex is comprehensive and has everything users need to get going. It does include a ton of stickers as well as a coaster among the necessities. The DIMM.2 add-in card and brackets are included, as well as extra facias for the removable customization above the first PCIe slot. This package deal has to be applicable to both gamers and overclockers, hence the stickers, the drinks coaster, and other bits. 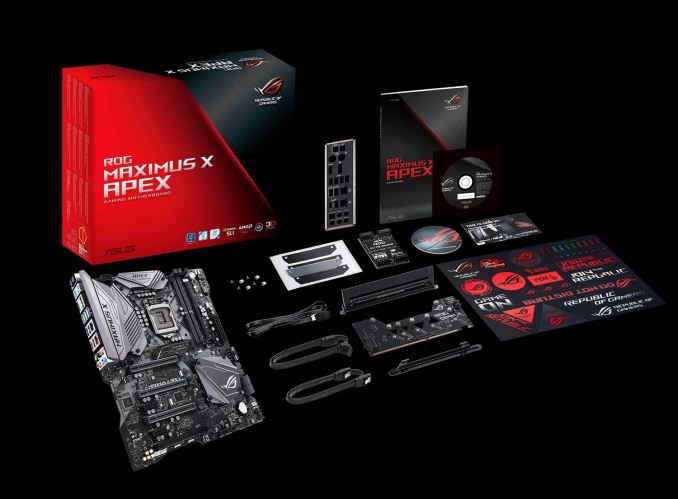