The new 88SS1100 controller is the most direct replacement for the 88SS1093 "Eldora" controller, Marvell's most popular current NVMe controller. Both use a PCIe 3.0 x4 host interface and an 8-channel NAND interface. The 88SS1100 is very similar to the 88SS1098 enterprise controller that Marvell announced earlier this year, with the 88SS1100 lacking a few enterprise-oriented features like dual-port capability and high-capacity RAM support. The basic performance specs of the 88SS1100 are the same: up to 3.6GB/s for sequential reads, 3.0GB/s for sequential writes, 780k IOPS for random reads and 650k IOPS for random writes. Marvell's updated controller architecture enables this level of performance through a combination of an upgraded LDPC error correction engine, a faster NAND interface and an increase in the number of CPU cores.

Marvell is also introducing the 88SS1084 as a low-end counterpart to the 88SS1100. The 88SS1084 cuts the NAND channel count in half to just four channels, reducing the maximum performance but allowing for a significantly smaller controller. The 88SS1084 is intended for use in cheaper drives and form factors as small as M.2 2242. The DRAM and PCIe interfaces on the 88SS1084 have the same width as those on the 88SS1100, as Marvell has seen limited interest so far in controllers with PCIe x2 interfaces or DRAMless controllers that use the NVMe Host Memory Buffer feature. Performance for the 88SS1084 is expected to be around 3.0GB/s for sequential reads, 2.6 GB/s for sequential writes, 450k IOPS for random reads and 400k IOPS for random writes. 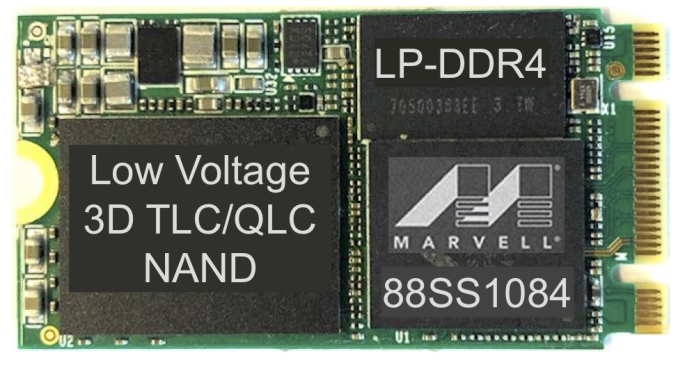 Marvell sells these controllers with the customers's choice from three levels of firmware support, ranging from a SDK providing basic hardware abstraction and leaving it up to the customer to implement the entire flash translation layer, up to a full turnkey solution that requires minimal customization from the drive manufacturer. The 88SS1100 and 88SS1084 controllers are available for purchase now, but will be ramping up to mass production in the second half of this year. Marvell's full turnkey firmware solution will be ready next year in time for the launch of SSDs using 96L 3D NAND.