ASRock & Fatal1ty: One of the Original Gaming Partnerships

The eSports boom didn’t just appear out of nowhere as competitive online gaming has been around for decades. One could (ed: but shouldn't) attribute the rise of eSports to the retired professional gamer, Johnathan ‘Fatal1ty’ Wendel. John won a number of competitions in the early 2000s, with over half a million dollars in prize money from twelve major competition wins in games such as Quake III and Unreal Tournament 2003.

His rise to fame is a predominant result of his skill and has been featured in mainstream media including the New York Times and Time Magazine. While he’s officially retired from competitive gaming, his branding and image as a champion live on through his Fatal1ty Inc. brand, one that is instantly recognized (ed: or confused) with winning. The Fatal1ty Inc brand curtails his gaming days through brand licensing which is more likely to be a bigger earner than his competitive gaming days; he still regularly makes the top-10 of the richest online gamer lists with an unknown worth, but he has been a success story for gaming and his transition into gaming themed products has been financially beneficial.

While this partnership between Fatal1ty and ASRock isn’t his first (remember Abit or OCZ anyone?), he has been partnered with ASRock for what seems like forever with the first Fatal1ty branded boards (P67 and 990FX) coming to the market back in 2011. Both the Fata1ty branded B450 options are primarily targeted towards gamers on a budget with the intention of using the AMD Ryzen second generation processors, with capability of supporting both the first generation Ryzen processors and Ryzen and Vega core combined APUs.

The following B450 analysis was taken from our B450 Launch Motherboard Overview.

The new B450 chipset launch compliments the release of the Ryzen 2000 series processors, with AMD looking at its current mid-range and high-end parts. The B450 chipset is designed to be a cheaper entry point into the ecosystem, even for users picking up the eight-core Ryzen 2700X ($329) and hex-core Ryzen 2600X ($229) units and going to overclock. 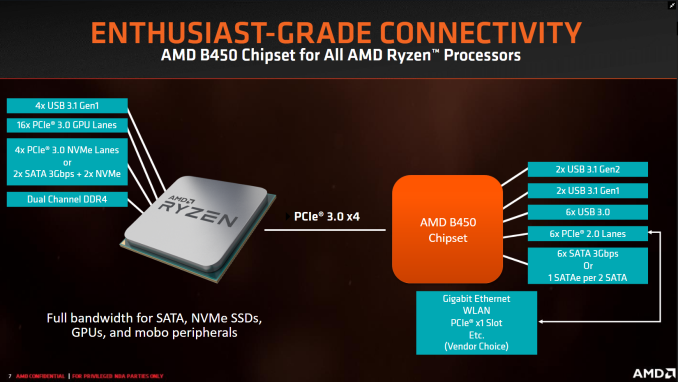 Like the already released X470 Promontory chipset, the B450 chipset is the direct successor to previous first generation B350 chipset. Not much hasn’t changed on the surface in regards to USB connectivity, storage options and PCI lanes, however AMD has added a couple of new technologies to bolster the appeal of the new budget-focused chipset.

*possibly four, double checking with AMD
**Can be possible with BIOS updates, will be motherboard dependant
^ Can be enabled with certain CPUs if a license is purchased 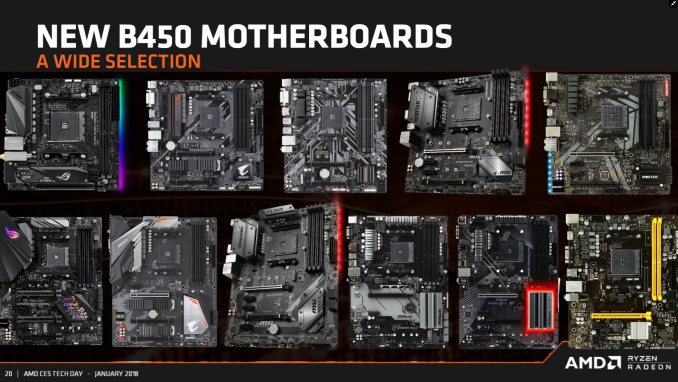 Analyzing B450 for AMD Ryzen: A Quick Look at 25+ Motherboards

For our first look at the B450 motherboards starts with a pair of ASRock boards - the B450 Gaming K4 and the B450 Gaming-ITX/ac. These boards are pretty different: a cheaper ATX board and a Wi-Fi enabled mini-ITX board respectively. This is going to be an interesting analysis.