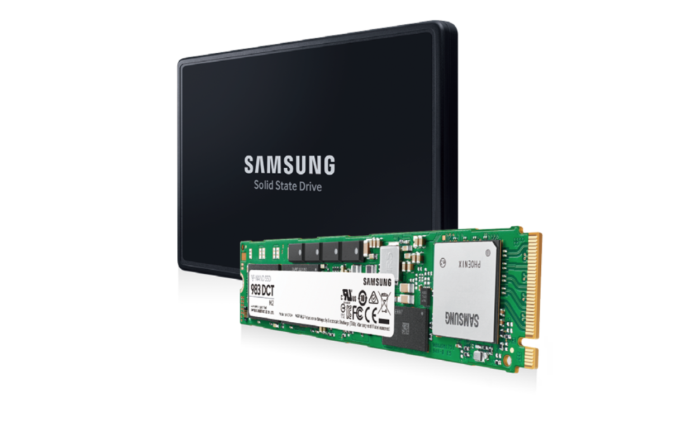 Today Samsung is launching a new generation of datacenter SSD models that are intended for small and medium businesses and will be sold through online retailers. Most of the new models are related to existing enterprise SSDs like the PM883 that have only been available to OEMs and the largest customers. The new models will be easier to acquire than the OEM models, and will not include any of the OEM-specific firmware customizations. Overall, this amounts to a major shift in Samsung's enterprise SSD strategy—away from being a pure OEM supplier and toward the OEM+channel model they use for client/consumer SSDs.

Starting at the bottom of the new product stack is the 860 DCT SATA SSD. This drive falls between a typical client/consumer drive and what is usually expected from an enterprise SSD. The 860 DCT 's hardware platform is based on the 860 EVO consumer SSD and thus lacks power loss protection, but the firmware is tuned for consistent sustained performance with no SLC write caching. The 860 DCT is intended for cost-sensitive use cases like content distribution networks (CDNs) that have very read-heavy workloads and do not require the extra data integrity guarantees provided by power loss protection. The 860 DCT uses 3D TLC NAND, but this product segment should be taken over by QLC NAND over the next year or two. The 860 DCT's write endurance rating is 0.2 drive writes per day (DWPD), comparable to entry-level client/consumer SSDs.

The higher-end SATA drive Samsung is introducing is the new 883 DCT, based on the PM883 introduced at the beginning of the year. This drive features power loss protection and a more typical write endurance rating of 0.8 DWPD. There's no MLC-based SATA SSD in the new product family, reflecting the shift to NVMe/PCIe interfaces for drives intended for write-heavy workloads.

The mainstream NVMe product in the new family is the 983 DCT, based on the PM983's combination of TLC NAND and the Phoenix controller that also powers the 970 PRO and 970 EVO consumer SSDs. The 983 DCT features substantially higher performance than the 883 DCT SATA drive but comes with the same 0.8 DWPD write endurance rating. The 983 DCT will be available in the M.2 22110 form factor or as a 7mm-thick 2.5" U.2 with slightly higher performance thanks to the higher power and thermal limits of the larger form factor. The PM983 is also manufactured in Samsung's new NF1 form factor, but there are too few systems with NF1 slots to justify releasing a retail 983 DCT in that form factor at this time.

Lastly, the new 983 ZET finally brings Samsung's Z-SSD technology to a broader audience. The 983 ZET is features much higher write performance than the 983 DCT and is rated for up to 10 DWPD. This is still well shy of the 30 DWPD that the Z-SSD SZ985 offers or the 60 DWPD that Intel is now offering on the Optane SSD DC P4800X. Low latency is still a key selling point of Z-NAND, but Samsung has not yet provided final random I/O or latency specs for the 983 ZET. The 983 ZET will be available as a PCIe add-in card, though a future M.2 version based on the SZ983 would not be surprising.

The two SATA drives and the 983 DCT are already shipping and are starting to show up for sale through distributors like Amazon and CDW. The 983 ZET will be available on September 24th. We already have a review sample of the 860 DCT undergoing testing, and are expecting to review the 883 and 983 later this year.