Physically, the i-Rocks Pilot K70E will appear peculiar to experienced users. The keyboard has a very tall and heavy body, yet low profile keycaps. Aesthetically, the transparent acrylic exterior of the keyboard is likely to appear kitschy at first sight, yet it has its distinct advantages as well. One of these advantages is that it diffuses the lighting from the switches and creates beautiful lighting effects. The other main advantage is that the top acrylic cover is removable and the users can replace the grey sheet beneath it with whatever they choose - another color, an abstract design, a wood/carbon-like vinyl sticker, pictures, or anything else.

We received the US layout version of the i-Rocks Pilot K70E. It is a standard 104 keys keyboard that fully adheres to the ANSI layout. There are no volume control knobs, extra media keys, or any other extra keys/buttons on the keyboard. The bottom row of the keyboard has a 6.25× Spacebar and seven 1.25× bottom row keys. The right Win key has been replaced with an Fn key that is used to access the keyboard's advanced features.

The low-profile keycaps are made from ABS plastic and have normally sized characters printed on them. These keycaps do not affect key travel, which remains at 4 mm, the same as with most mechanical keyboards currently available. Both the primary and the secondary character are printed at the top of each keycap, which is a tactic frequently used with mechanical keyboard so as to place both characters over the lighting LED. The catch here is that the lighting of these switches is uniform around the stem, so using such switches on this keyboard is virtually meaningless. If I had to guess, these keycaps are most likely coming from a production line that is supplying the same keycaps for use on mechanical keyboards as well. 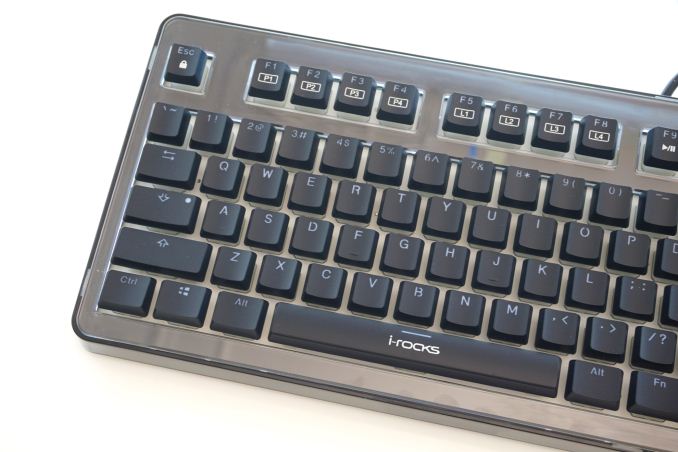 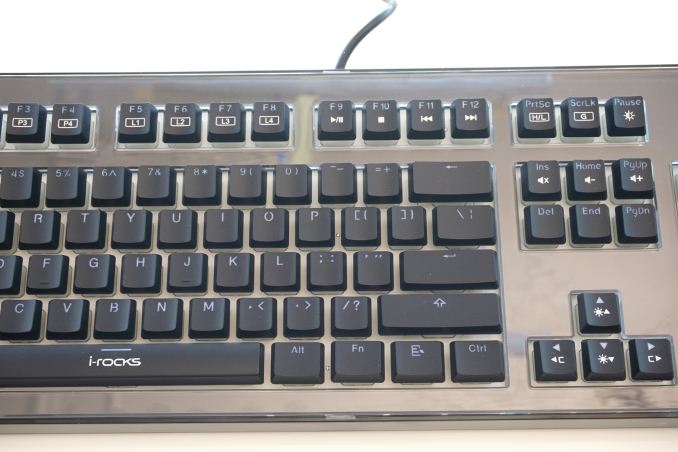 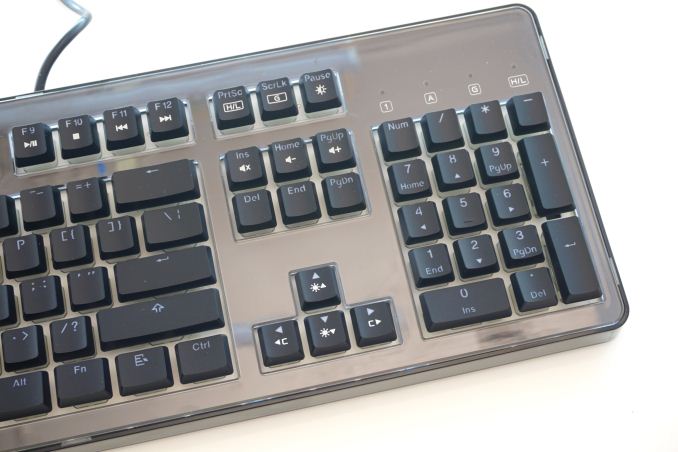 The very few advanced functions that the keyboard has available by default are accessible via keystroke combinations using the Fn key. Most of them are for the on-the-fly adjustment of the backlighting. Media and audio control is also possible via the F9-F12 and Insert/Home/PgUp keys respectively, yet having to rely on keystroke combinations to simply adjust the sound volume is not very practical.

One of the major features of capacitive keyboards is that the actuation distance can be changed in software. The i-Rocks Pilot K70E supports this and the actuation distance can be switched between 1.4 and 2.2 mm via the Fn+PrtSc keystroke. Fn+ScrLk initiates the "gaming mode" that, by default, only disables the Win key but can also be extended to include more keys and keystroke combinations. 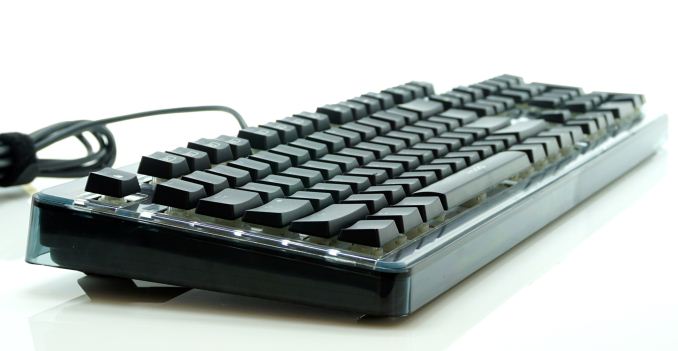 The keyboard does not support per-key programmability, only four keystroke combinations (Fn+F1-F4) that are blank by default and can be programmed by the user via the keyboard's software. Finally, the Fn+Esc combination turns off all backlighting and locks the entire keyboard until the same keystroke combo is pressed again.

The underside of the keyboard is simple, with two rear legs providing a single fixed tilt setting. The tilt is reasonable, yet perhaps a little bit on the low side considering the massive height of the keyboard. The rubber anti-slip parts are effective but gravity does most of the work, as the i-Rocks Pilot K70E is one truly heavy keyboard. 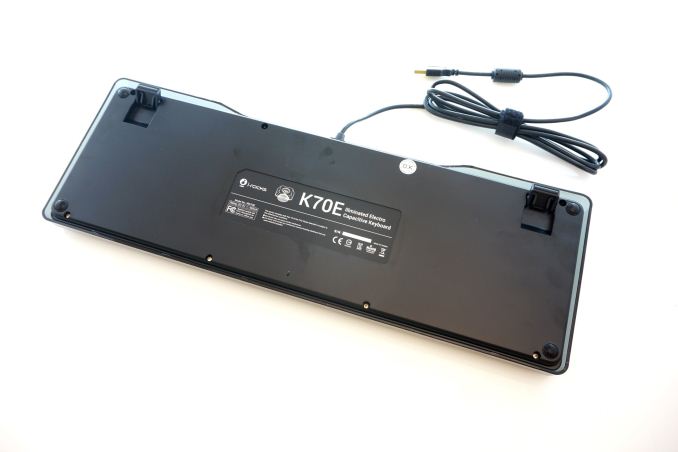 Beneath the keycaps we find i-Rocks' capacitive switches. These switches look very much like membrane-based keys, as they do use a membrane to shield the interior spring and to provide some dampening. The result is that capacitive keys feel a little "mushy", just like typical keyboards do, yet they are virtually silent, unlike mechanical keyboards where their noise output ranges between acceptable and ear-bursting. The company also took the clever approach to install a stem that is compatible with the cross-mount keycaps that most of the mechanical keyboards are using, meaning that keycaps made for Cherry switches (and their clones) will fit on the i-Rocks Pilot K70E. The only problem here is that normal keycaps will tower above the low-profile keycaps of the keyboard if only some of them are replaced, which is not necessarily a bad thing if that is what the user intends to do. Otherwise, a full set it required to replace all of the keyboard's keycaps. 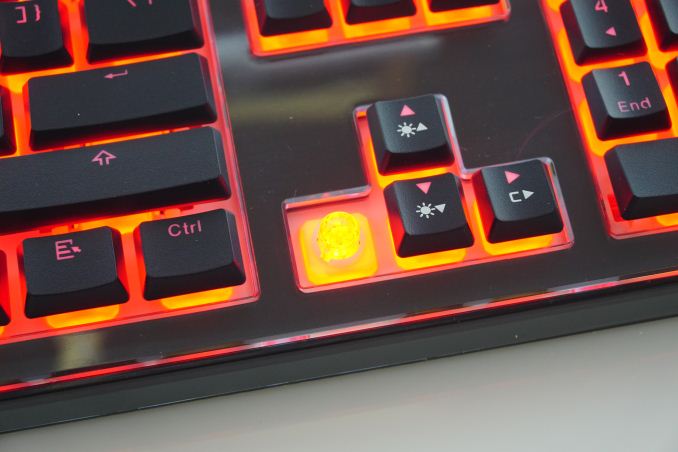 The i-Rocks Pilot K70E has per-key programmable RGB backlighting. The backlighting is partially configurable via keystroke combinations, allowing the user to switch between pre-programmed effects and colors. More advanced programming is also possible via the keyboard's software. The lighting is exceptional - uniform, bright, and vibrant. Only the Space Bar key creates a small visual dissonance, as the single LED cannot illuminate the largest portion of the massive keycap. 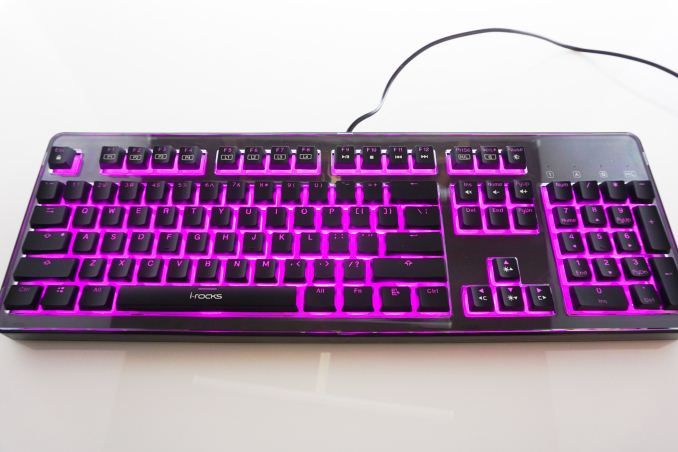 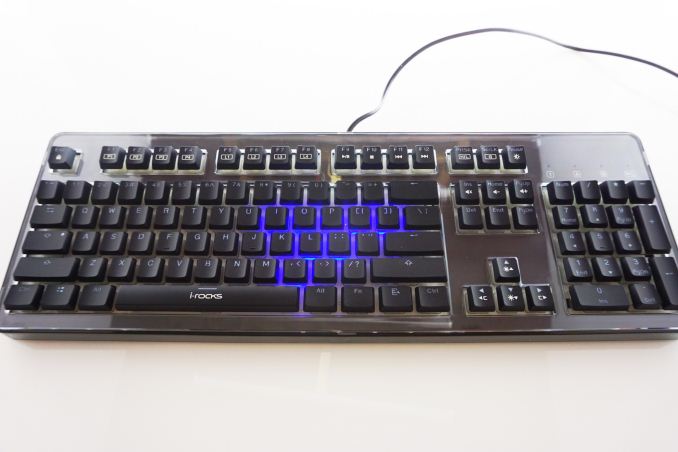 Taking apart the body of the i-Rocks Pilot K70E, we find a thick white steel sheet that is partially responsible for the massive weight of the keyboard. Much like how mechanical keyboards are usually made, the main body of the keys is attached to the sturdy steel plate and the PCB is soldered directly on its underside. The i-Rocks Pilot K70E actually has two PCBs, as the design of the capacitive switches requires precise spacing between components. 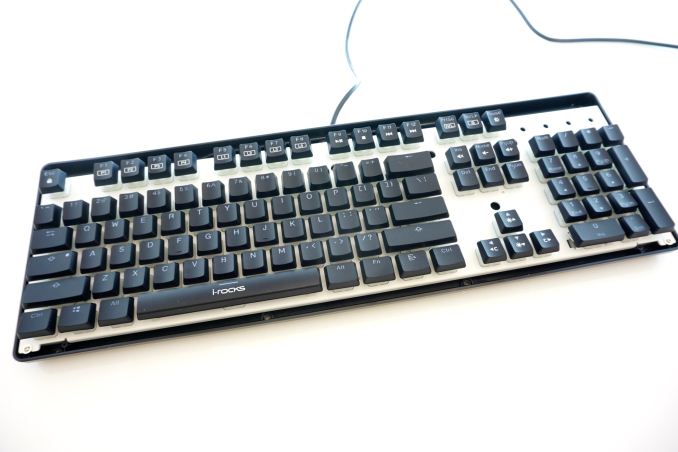 The heart of the i-Rocks Pilot K70E is a Megawin MG84FG516, a microcontroller that we have never seen before in any kind of keyboard. It incorporates an Intel 80C51 8-bit CPU and 64K Bytes flash ROM with a theoretical maximum frequency of 36 MHz (12 MHz nominal). It is not a fancy controller at all but, as we will also see in the following pages, it is more than capable to handle the limited advanced features of the keyboard. 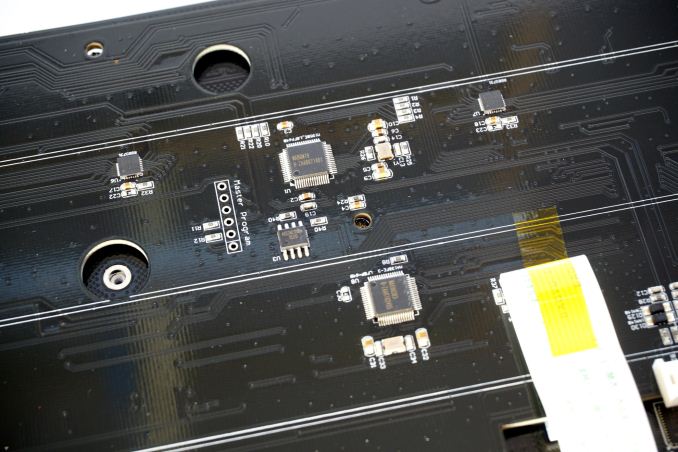 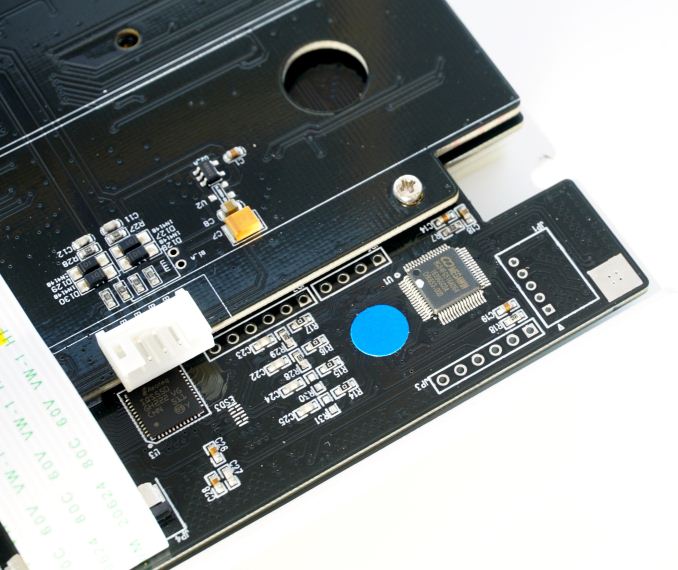