In order to test the quality and consistency of a keyboard, we are using a texture analyser that is programmed to measure and display the actuation force of the standard keyboard keys. By measuring the actuation force of every key, the quality and consistency of the keyboard can be quantified. It can also reveal design issues, such as the larger keys being far softer to press than the main keys of the keyboard. The actuation force is measured in Centinewton (cN). Some companies use another figure, gram-force (gf). The conversion formula is 1 cN = 1.02 gf (i.e. they are about the same). A high-quality keyboard should be as consistent as possible, with an average actuation force as near to the manufacturer's specs as possible and a disparity of less than ±10%. Greater differences are likely to be perceptible by users. It is worth noting that there is typically variance among keyboards, although most keyboard companies will try and maintain consistency - as with other reviews, we're testing our sample only.

The machine we use for our testing is accurate enough to provide readings with a resolution of 0.1 cN. For wider keys (e.g. Enter, Space Bar, etc.), the measurement is taking place at the center of the key, right above the switch. Note that large keys generally have a lower actuation force even if the actuation point is at the dead center of the key. This is natural, as the size and weight of the keycap reduce the required actuation force. For this reason, we do display the force required to actuate every key but we only use the results of the typically sized keys for our consistency calculations. Still, very low figures on medium sized keys, such as the Shift and Enter keys reveal design issues and can easily be perceptible by the user. 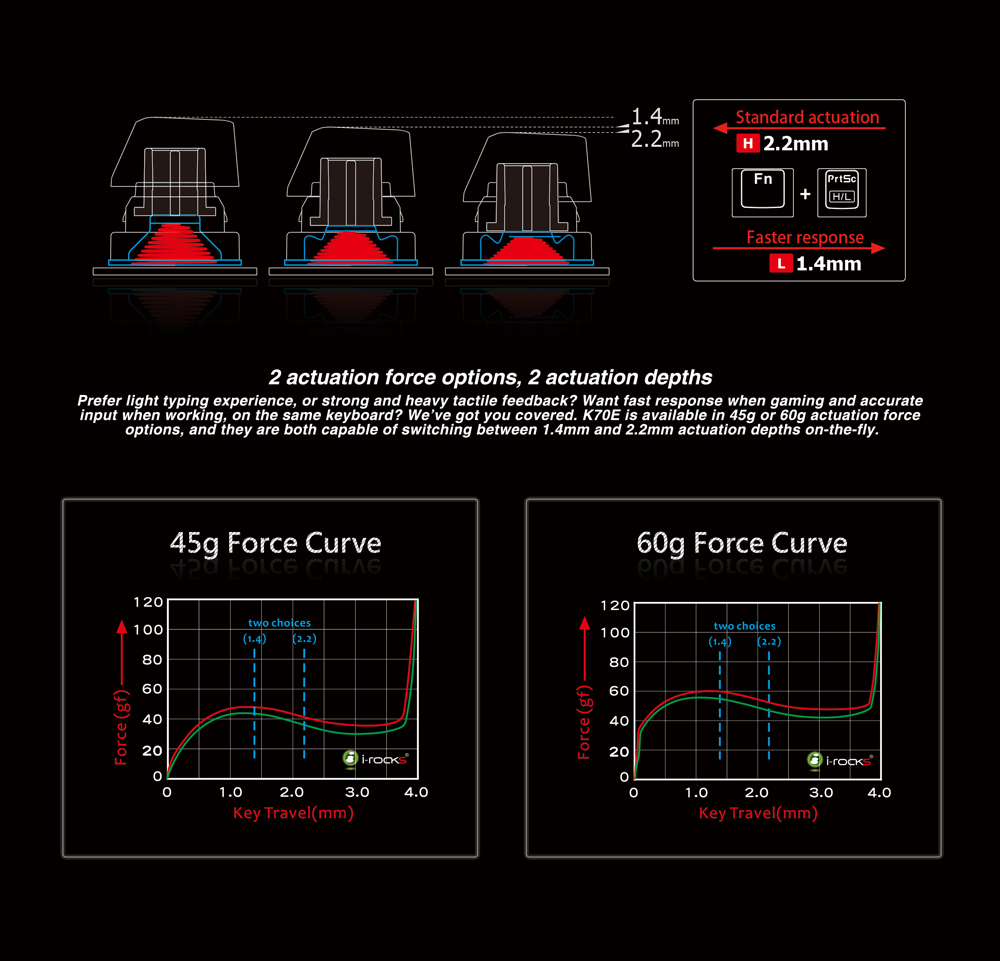 At first sight, i-Rocks' capacitive switches appear to be the best that we have ever tested, outdoing even the best mechanical switches in terms of minimizing disparity. The switches of our test sample were rated at 45 gf (gram-force) but that is the actuation force, not the operating (maximum) force. The maximum force of the switch is a little above 50 gf.

Despite the insanely good consistency of the keyboard, a closer look at the results reveals that both the actuation force and distance are not aligned with the manufacturer's specifications. The standard actuation force should be 45 gf and the actuation distance should be 2.2 mm, yet our switches actuate 0.4 mm sooner. The difference even widens when we switch from the "Low" to the "High" actuation point, which should be at 1.4 mm but is at 0.8 mm instead, before the switch's tipping point. Despite the considerably different actuation distance compared to the manufacturer's specifications, all of the switches performed uniformly and consistently.

It was not long before we realized what the culprit behind that difference was. Capacitive sensors are very sensitive to environmental factors and the room where the test apparatus is located was very hot and humid at the time of the test (34°C-78% relative humidity). Artificially reducing the humidity to even just 60% resulted in a consistent shift of the actuation point to 0.2 mm lower. i-Rocks' specifications obviously apply to standard room temperature conditions (which most likely are 25°C and 45-55% RH).

I always try to use every keyboard that we review as my personal keyboard for at least a week. My typical weekly usage includes a lot of typing (about 100-150 pages), a few hours of gaming and some casual usage, such as internet browsing and messaging. I personally prefer Cherry MX Brown or similar (tactile) switches for such tasks. The capacitive switches were something new for me, alien at first, yet felt comfortable. It took me but a few hours to grow accustomed to their feeling. The keypresses were very responsive and the keyboard was relatively comfortable for long-term use. The movements are precise but feel mushy, as the design partially relies on membranes to function. On the other hand, the membranes also dampen the noise output of the keyboard, making it virtually silent while typing, increasing the comfort of both the users and everyone in the vicinity.

For gaming, I tried switching to the high actuation point and see if that could offer any kind of advantage. The force required to actuate a key was minimal, with even the slightest touch resulting to a keypress. That was a double-edged knife, as I ended up actuating keys unintentionally, by simply resting my finger on the keypad. With practice, seasoned gamers could easily minimize their response times using this keyboard. On the other hand, the keyboard does not support per-key programming or profiles. The need to use both hands in order to execute a simple macro makes the function wholly unsuitable for almost any kind of game. These features usually are unnecessary to FPS/Action gamers, yet practically essential for MMORPG gaming.