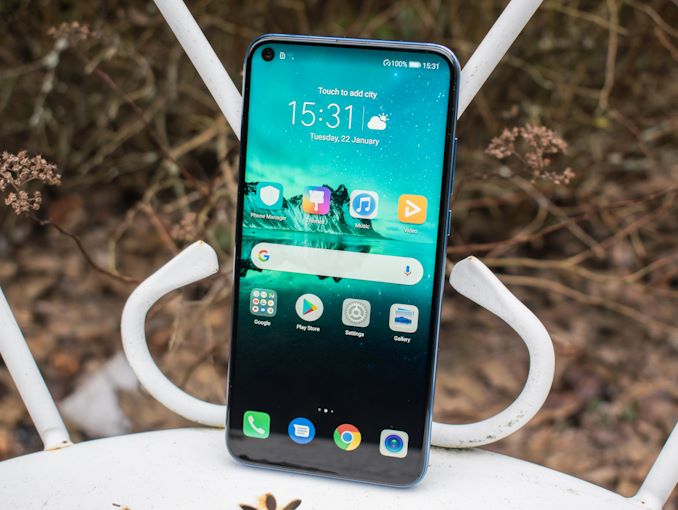 Last week Honor launched its new 2019 flagship device: the Honor View20. The new flagship phone is the follow-up to last year’s View10, a new segment entry in Honor’s usual line-up. The View series is characterised by their early adoption of full-screen, minimalistic bezel designs; last year’s View10 was one of the early devices bringing 18:9 aspect ratio screens to the masses, while this year’s new View20 further improves the screen-to-body ratio with the introduction of a hole-in-display front-camera setup.

While the hole-in-display camera setup of the View20 is certainly its first striking design characteristic, Honor is also positioning the View20 as a special camera phone as it is one of the first of a wave of 48MP camera sensor devices sporting Sony’s new IMX586.

Let’s go over the specifications of the View20 first:

At the heart of the phone we find the brand-new Kirin 980 SoC from HiSilicon. Huawei’s/Honor chipset strategy is to make flagship SoCs that are not only used in their highest tier flagship devices, but also trickle down into lower priced models such as demonstrated by the new View20. In terms of CPU performance, the Kirin 980 gets top marks, as we saw it performing outstandingly well inside of the Mate 20 and Mate 20 Pro which we’ve reviewed two months ago. The same performance is showcased by the new View20, meaning we’ll be seeing excellent performance and outstanding power efficiency out of the phone, more than able to keep up with other 2019 flagship phones.

One performance aspect of the View20 that improves on the Mate 20’s, is sustained GPU performance: The integration of a beefier heatpipe now allows the SoC to sustain the peak GPU performance in nearly all workload and reasonable temperature situations.

The new View20 increases the main memory and storage capacities compared to its predecessor: We now see a 6GB/128GB model as the base configuration, while Honor offers an up-sell 8GB/256GB variant as well. Pricing at the time of writing was still undisclosed, and we’ll update the article after the official launch event has concluded. 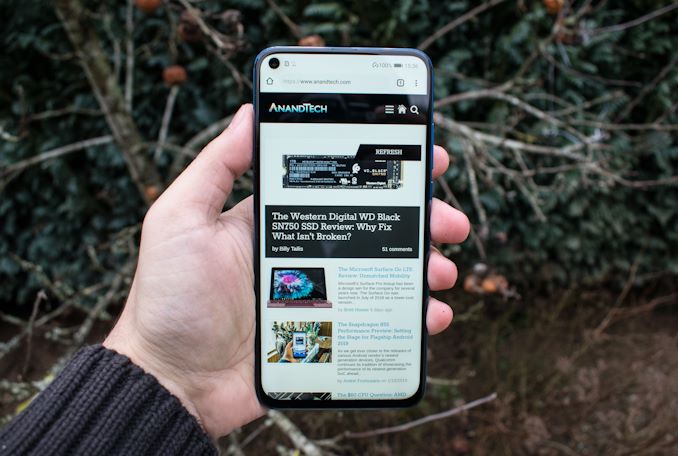 The View20 is characterised by its near bezel-less design and full-screen display. The phone’s specification sheet does make it sound scarily big at 6.4” display diameter – however because of its elongated 19.5:9 aspect ratio, the actual device still only comes in at 75.4mm wide, a width that has over the last year become increasingly popular by essentially most if not all phone vendors.

I found the display of the View20 to be relatively “okey” – it isn't extraordinarily great nor is it bad. The 1080p resolution is sufficient for most people, however it’s not the densest display available for sure. The contrast ratio is also good for an LCD, but the one thing that was disappointing was the off-axis viewing angles which are rather sub-par. Even though the View20 is within the price range say a OnePlus 6/6T – it definitely lags behind the OLED competition and even the higher quality LCD competition, such as even Huawei’s own most recent Mate 20. 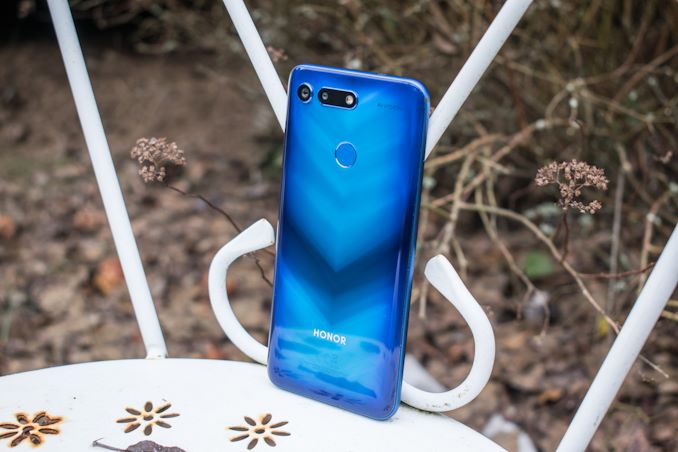 The back of the View20 is characterised by a unique “V-shaped” reflective glass back. This was done on purpose in order to give the device a defining look that’s not available anywhere else. We also find a standard rear-mounted fingerprint sensor on the back.

Naturally the other defining feature of the phone is again the front hole-in-display camera setup. The View20 isn’t the first device with the feature, but it is among the first non-Samsung Display based phones to feature the new technology. Honor is particularly proud of the dimensions achieved on the View20 as the camera hole is of a smaller diameter than what Samsung had achieved in the A8. 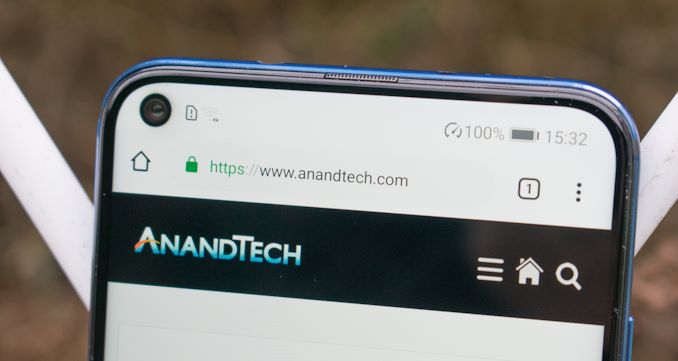 The hole-in-display camera cut-out is an alternative to display-notches, and represents an intermediate technology step towards the goal of true full-screen display devices. There are some phones that can already claim this today, with Honor’s own Magic 2 being one of them, but these come with rather cumbersome moving mechanical elements which do represent regressions in terms of weight and device robustness.

Applications which apply notification area colour schemes also work great – here the notification bar when being blacked out also automatically hides the camera hole. This is the default behaviour of the phone, but as mentioned can be forced to be always like this (with added rounded corners being the only difference).

At the bottom of the phone we find a USB-C port as well as the single mono-speaker of the phone. 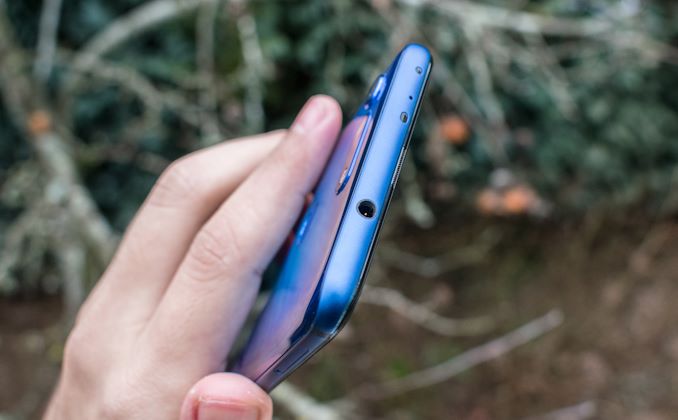 The top is characterised by a IR baster, ambient light sensor, as well as the much controversial 3.5mm headphone jack. Good on Honor’s product team on deciding to keep this feature! 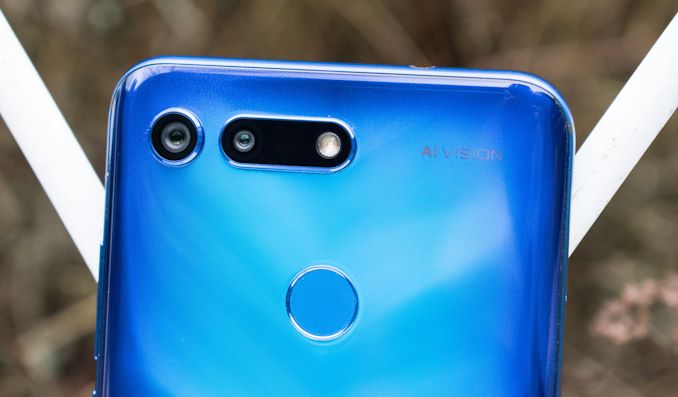 Finally, going back to the rear of the phone, the other defining feature or the View20 is the fact it is one of the first phones to include Sony’s new 48MP IMX586 camera sensor. Huawei isn’t new to high MP sensors as we’ve seen the custom 40MP unit in both the P20 Pro and Mate 20 Pro last year. The View20’s sensor, although it has a higher resolution, is actually smaller than the 1/1.7” module found in Huawei’s aforementioned devices, coming in at 1/2”. The bigger resolution in a smaller sensor is achieved by reducing the pixel pitch of the sensor from 1µm to 0.8µm. Furthermore, the pixel array is arranged in a quad-bayer setup:

This means that the physical colour filters on the camera sensor only have an effective resolution of 12MP. Sony’s sensor ISP is able to achieve a virtual 48MP bayer result out of the sensor by rearranging the subpixel-data among the logical pixels. It’s to be noted that this method would result in an effective spatial resolution increase of only half-way to 48MP, and actual results would be of clarity somewhere in the range of a true 27MP bayer sensor.

The secondary camera sensor on the View20 is an odd one: It’s a TOF (time of flight) sensor that is able to act as a 3D sensor. Currently the issues with this module is that Honor only has very limited uses for it, only showcasing 3D motion control of a specific game. It would have been nice if the phone at least had some sort of demo application showcasing the raw input of what the TOF sensor actually sees, as this would have been a nice technology showcase of the available hardware. Honor says it will continue to work on software use-cases in the future and update the phone’s firmware over time to make better use of the TOF sensor.