As with most new x86 microarchitectures, there is a drive to increase performance through new instructions, but also try for parity between different vendors in what instructions are supported. For Zen 2, while AMD is not catering to some of the more exotic instruction sets that Intel might do, it is adding in new instructions in three different areas. 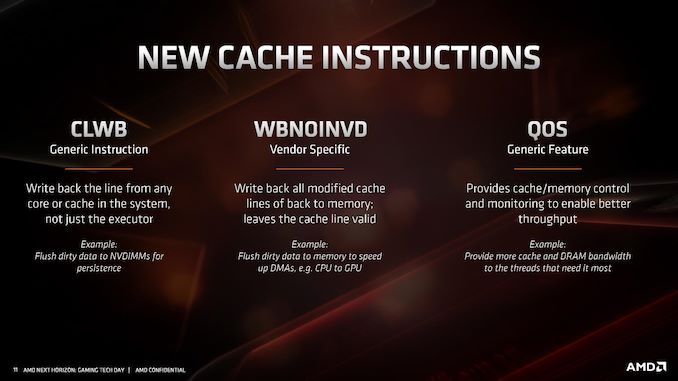 The second cache instruction, WBNOINVD, is an AMD-only command, but builds on other similar commands such as WBINVD. This command is designed to predict when particular parts of the cache might be needed in the future, and clears them up ready in order to accelerate future calculations. In the event that the cache line needed isn’t ready, a flush command would be processed in advance of the needed operation, increasing latency – by running a cache line flush in advance while the latency-critical instruction is still coming down the pipe helps accelerate its ultimate execution.

The final set of instructions, filed under QoS, actually relates to how cache and memory priorities are assigned.

When a cloud CPU is split into different containers or VMs for different customers, the level of performance is not always consistent as performance could be limited based on what another VM is doing on the system. This is known as the ‘noisy neighbor’ issue: if someone else is eating all the core-to-memory bandwidth, or L3 cache, it can be very difficult for another VM on the system to have access to what it needs. As a result of that noisy neighbor, the other VM will have a highly variable latency on how it can process its workload. Alternatively, if a mission critical VM is on a system and another VM keeps asking for resources, the mission critical one might end up missing its targets as it doesn’t have all the resources it needs access to.

Dealing with noisy neighbors, beyond ensuring full access to the hardware as a single user, is difficult. Most cloud providers and operations won’t even tell you if you have any neighbors, and in the event of live VM migration, those neighbors might change very frequently, so there is no guarantee of sustained performance at any time. This is where a set of dedicated QoS (Quality of Service) instructions come in.

As with Intel’s implementation, when a series of VMs is allocated onto a system on top of a hypervisor, the hypervisor can control how much memory bandwidth and cache that each VM has access to. If a mission critical 8-core VM requires access to 64 MB of L3 and at least 30 GB/s of memory bandwidth, the hypervisor can control that the priority VM will always have access to that amount, and either eliminate it entirely from the pool for other VMs, or intelligently restrict the requirements as the mission critical VM bursts into full access.

Intel only enables this feature on its Xeon Scalable processors, however AMD will enable it up and down its Zen 2 processor family range, for consumers and enterprise users.

The immediate issue I had with this feature is on the consumer side. Imagine if a video game demands access to all the cache and all the memory bandwidth, while some streaming software would get access to none – it could cause havoc on the system. AMD explained that while technically individual programs can request a certain level of QoS, however it will be up to the OS or the hypervisor to control if those requests are both valid and suitable. They see this feature more as an enterprise feature used when hypervisors are in play, rather than bare metal installations on consumer systems.