The GIGABYTE Aorus firmware has two different modes for users to sink their teeth into. The clean looking Easy Mode sets the stage, while for more experienced users, an advanced mode which allows users to tweak CPU, memory, storage, networking and PCIe related settings. It has a simple design which consists of a primarily black background, white text, and orange accents at the top and bottom. The advanced mode can be accessed by pressing the F2 key, with other functions such as the Smart Fan 5 utility accessible by pressing F6, and Q-Flash for updating the board's firmware with a press of the F8 key. 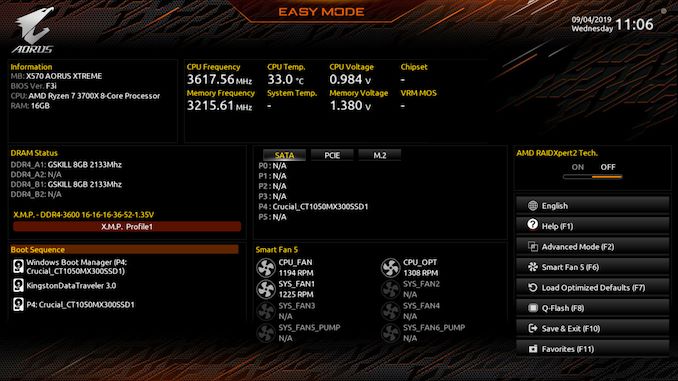 Looking at the initial splash screen upon first entering the firmware, the Easy Mode is designed to give users an easy to use and navigate the area in which they can customize basic, yet primary settings. These include being able to enable or disable memory X.M.P profiles at the click of a button, change the boot sequence, and enable AMD RAIDXpert 2, or disable of course. Basic information on the current fan and pump header speeds are shown in the central section at the bottom part of the screen, while along the top is a basic set of information on the model, firmware version, and the processor installed. To the right of this are details of the current CPU frequency, current CPU temperature, with both CPU and memory voltages also displayed. Along the right-hand side, users can navigate through a menu of clickable options including the advanced mode, the Smart Fan 5 utility, reset the firmware settings back to default settings, and access the Q-Flash firmware update tool. Each menu is represented with a corresponding key eg, F2 for advanced mode, F8 for Q-Flash etc. 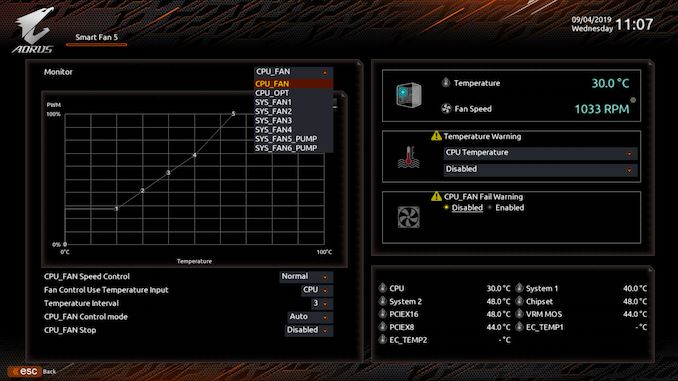 Pressing F6 from the Easy Mode allows users to access the Smart Fan 5 utility. This allows users to control and set fan speed parameters based on different presets including normal, full-load, and less aggressive profiles. The option is also available to set fan profiles based on a curve with speed set to a relative temperature. Other options available with Smart Fan 5 includes giving the users the ability to set CPU Fan fail warnings so that if a CPU fan fails during operation, an alert is given to the user to warn them as it could potentially cause damage to the system. 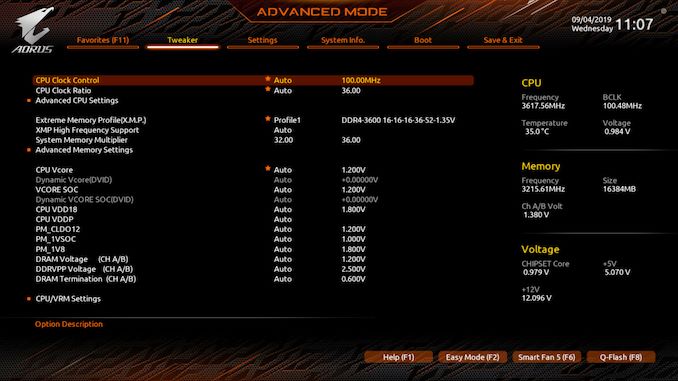 Within the Advanced mode which can be accessed by pressing the F2 key opens all of the more functional settings. This includes the Tweaker section which allows users to overclock the CPU and memory, and customize a variety of power-related setting such as Precision Boost Overdrive, LLC configuration, and voltage settings. Users looking to customize their memory settings deeper can do so under the advanced memory settings which allow primary, secondary, and tertiary memory latency values to be changed. Below is a list of limitations when using the current firmware for settings such as CPU VCore, CPU frequency, DRAM frequency, and the Infinity Fabric/FCLK frequency. It should be noted that most of these maximum values won't even be able to be reached, even with extreme cooling methods:

Overall GIGABYTE's Aorus firmware is effective, simple to use and very easy to navigate with two highly user-friendly modes to switch between; the Easy and Advanced modes. The firmware itself is stable and responsive, and if earlier revisions of the firmware stood in line with other vendors at launch, those infancy issues are certainly worked out now. There is plenty of options for overclocking, tweaking and customizing settings including power-related settings. There aren't quite as many overclocking settings as models such as the MSI MEG X570 Godlike, especially in terms of memory latency settings, but the GIGABYTE Aorus firmware looks good and works well.

For such a high-end motherboard, GIGABYTE's software suite doesn't quite have the clout in terms of applications compared with the likes of ASUS, but they do include a functional set of applications which all focus around the hub like GIGABYTE App Center. Unlike a lot of vendors who provide its software and drivers bundled onto a disc, GIGABYTE provides users with a USB which is more modern, and practical due to the decline in optical disc drive usage. Some of the more functional utilities which come with the X570 Aorus Xtreme include the RGB Fusion 2.0 software, the SmartFan utility, the EasyTune overclocking software, and the @BIOS firmware updater. 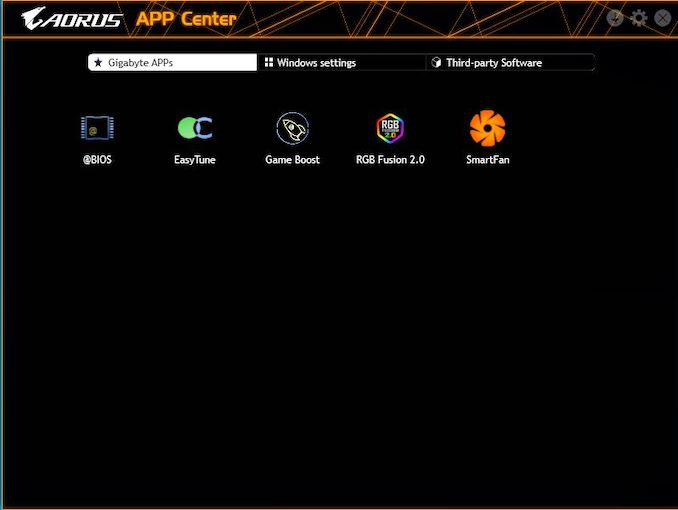 The GIGABYTE APP Center acts as the plexus for compatible applications and offers a couple of notable benefits. The first is it keeps all of the GIGABYTE's utilities in one place which makes it easier and more accessible for users to locate which app they are looking for. Secondly, the APP Center allows users to access Windows 10 based applications with a simple click including the device manager, power options, and even allows users to access Windows network-related settings. In the top right-hand corner, users can use the Live Update utility to keep drivers and GIGABYTE's software up-to-date. 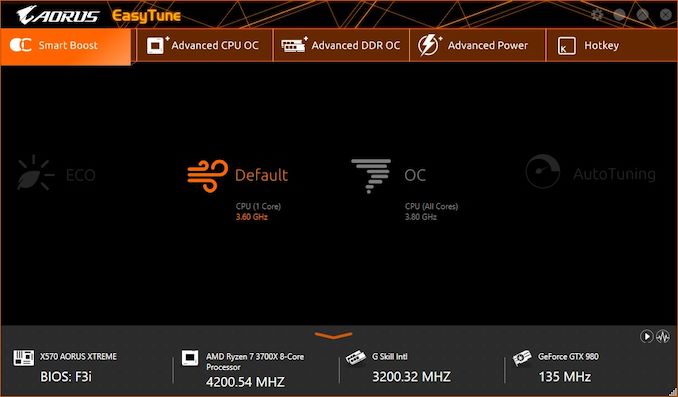 Looking at the Aorus EasyTune application, this gives users the ability to overclock their system within Windows, and although it comes across very basic in its delivery, it does include plenty of useful settings. This includes options to alter the base clock, CPU ratio and plenty of voltage settings including CPU VCore, SoC voltage, and CPU VDDP voltage. The Advanced DDR OC is a little underwhelming and only offers options to increase memory frequency and enable or disable X.M.P; hardly advanced in comparison to the AMD Ryzen Master utility which is favored about GIGABYTE's variant. 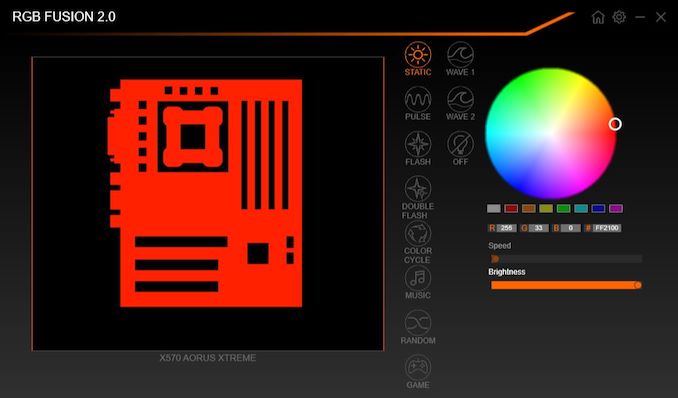 Over the last year, we have seen many implementations of RGB customization across many vendors, but the GIGABYTE RGB Fusion 2.0 is one of the most primitive-looking, but most functional pieces of software at the same time. Users can navigate and set a multitude of different RGB awe-inspired effects such as flash, double flash, and two wave settings; there are ten different RGB LED light settings in total as well as having the option to turn them off completely. I would expect something a little more flashy for a $700 flagship motherboard such as the X570 Aorus Xtreme, but it works and that's the most important thing. 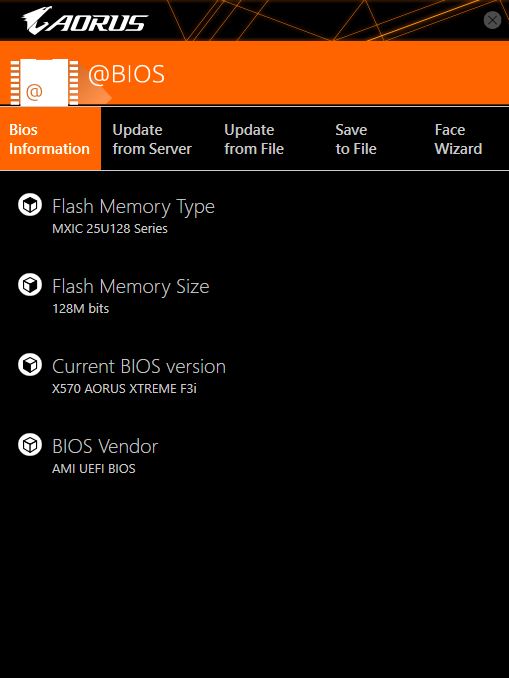 One of the more pertinent applications in the software bundle is the @BIOS utility which affords users with the ability to keep the board's firmware up-to-date. The integrated Q-Flash utility within the firmware and the related switch on the rear panel board offer the most reliable method to update the firmware, but users can download the latest version through the @BIOS utility with ease, or search for the latest version located at the official product page.

The GIGABYTE X570 Aorus Xtreme comes supplied with a software variant of its Smart Fan utility, but we failed to get it to fire on our operating system. A piece of software excluded from the bundle which is a reoccurring theme of late is a form of audio control. Users can download a version from the Windows store and given GIGABYTE's insistence in providing uprated audio componentry onboard, it's something that would be expected to come supplied with the board as standard. The bundle with the X570 Aorus Xtreme is a little underwhelming for a board of this pedigree, with the EasyTune software looking a little bare, but users can download the Ryzen Master overclocking utility for free and from all the vendors own overclocking software so far for Ryzen 3000 processors, AMD's seems to offer the most customization at present.