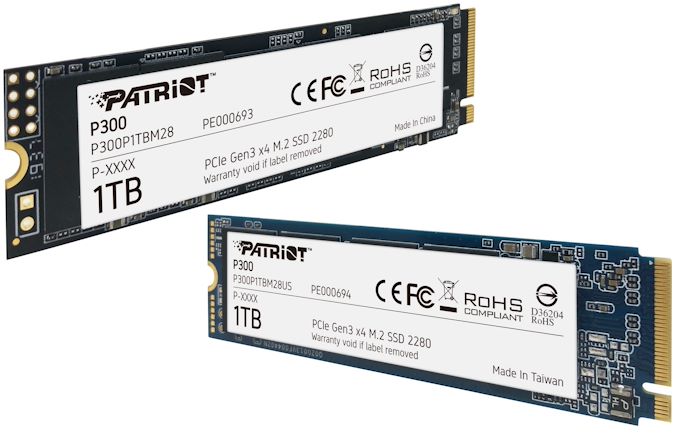 Patriot has launched its new family of entry-level NVMe SSDs with a PCIe 3.0 x4 interface designed for budget PCs. Patriot’s P300 drives come in capacities ranging from 128 GB all the way to 2 TB, but there is a catch. Although all the SSDs carry the same P300 name, they will use different controllers.

For the US market, Patriot offers P300 SSDs on blue PCBs based on the Phison PS5013-E13T controller, whereas for other markets the company rolled out P300 drives on black PCBs powered by the Silicon Motion SM2263XT chip. It is noteworthy that earlier this year the company implied at a meeting that Phison-powered drives might also show up on non-US markets. Patriot did not disclose what type of memory it plans to use with the drives, but what we often see is Phison controllers paired with Toshiba’s BiCS 3D TLC NAND, while SMI silicon is accompanied by Intel’s 3D TLC memory. Meanwhile, we do not known whether there is a plan to use the cheapest 3D TLC NAND memory available at a given time with either controller to reduce costs, but it is a possibility.

Performance-wise, Patriot promises that SSDs featuring different controllers will demonstrate similar speed and endurance, though it is clear that there will be some variability between models for the US and other markets. In particular, Patriot says that drives feature up to 2,100 MB/s sequential read speed, up to 1,650 MB/s sequential write speed, up to 290K random read IOPS, as well as up to 260K random write IOPS.

While performance numbers look pretty solid for entry-level products (at least when compared to Patriot’s previous-generation Scorch SSDs), their endurance is not that impressive as the company only rates them for about 0.28 DWPD (drive writes per day) over a three-year period. Consumer workloads are not write-intensive and certainly low-end products will not be used by content creators.

UPDATE 3/13: Patriot has informed us that TBW rating for the 2 TB model is 640 TB, not 320 TB as its documents stated previously.

Patriot is not the only vendor to release SSDs with different controllers and memory under the same name. Team Group introduced its MP33 drives with the same Phison and SMI controllers back in October. Using different controllers and memory from numerous suppliers within one lineup of SSDs allows the maker to offer the most aggressive prices for all configurations, but the real-world performance of actual products will differ. The latter means difficult qualification process for PC makers as well as uncertainty among end-users.