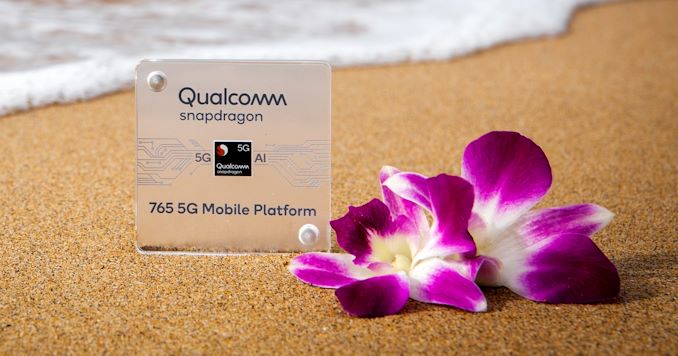 Today alongside with the launch of the Xiaomi Redmi K30 5G Racing Edition, Qualcomm is announcing the new Snapdragon 768G SoC which powers the device. The new SoC is a direct follow-up to the Snapdragon 765G announced last December, and the two chips are very likely the same silicon design, with the new variant increasing the clock frequencies.

The new chip features the same Cortex-A76 cores in a 1+1 configuration (one Prime high-clocked core, and one medium clocked core), alongside 6 Cortex-A55 cores. The difference in CPU performance lies in the frequencies of the big cores which are now at up to 2.8GHz and 2.4GHz for the Performance and Middle core – a more notable uplift from the 2.4 and 2.2GHz clocks of the Snapdragon 765G.

GPU clock frequencies have also been increased, resulting in at 15% performance boost over the Snapdragon 765.

The rest of the chip is seemingly identical to the Snapdragon 765 series. What’s interesting here is that Qualcomm does name it quite differently in its SKU line-up. While it very much shares the design of the Snapdragon 765, it’s also a possibility that it’s a silicon respin of the chip, the timelines certainly would make sense and it’s also not the first time that Qualcomm would have done this (Snapdragon 821 is an example of this). If the increased clocks come at a cost of higher power draw or loss of efficiency is anybody’s guess right now – there’s also the possibility that yields on Samsung’s 7LPP node has improved and thus enabled the higher frequencies.