Our maximum speed testing is performed with both the fans and the pump of the kit powered via a 12V DC source. This input voltage should have the pump and fans matching the speed ratings of the manufacturer. SilverStone’s fans came close enough, with our tachometer reading 2180 RPM for the 120 mm fans and 1560 RPM for the 140 mm fans. These fans are rated at 2200 RPM and 1600 RPM respectively. Furthermore, the speed difference between the seven fans we tested was negligible, indicating great manufacturing quality and minimal tolerances. 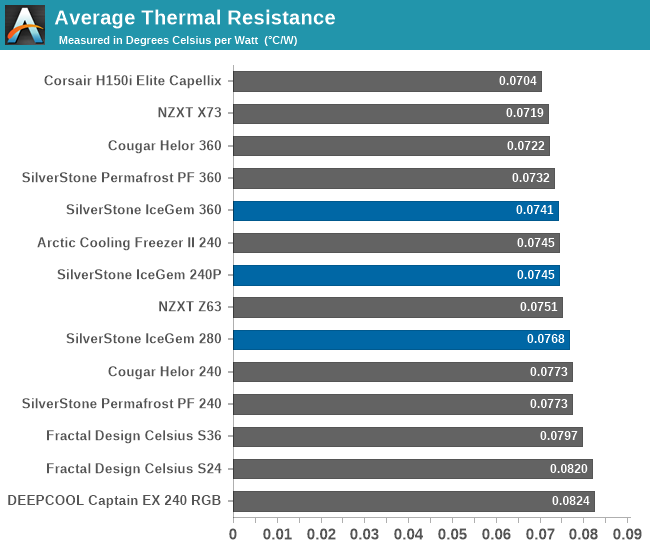 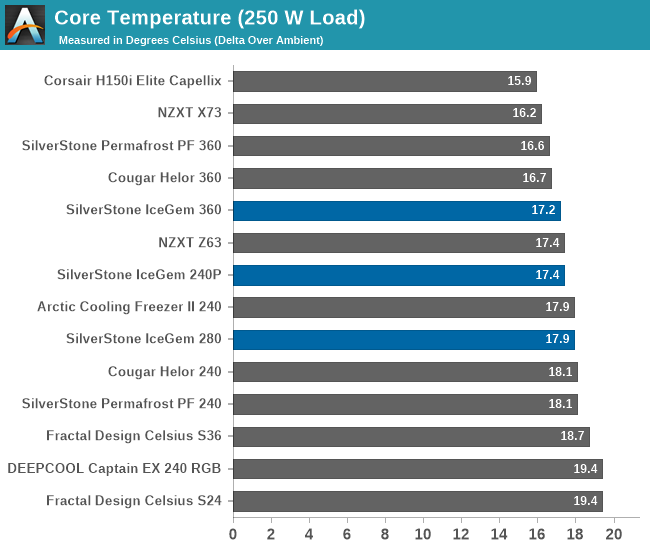 A glance at the average thermal performance charts reveals a great surprise, with the IceGem 240P outperforming the 280 version and getting quite close to the 360 version as well. The 140 mm fans of the IceGem 280 are significantly quieter though, giving that cooler an advantage in acoustics. The average thermal resistance of 0.0745 °C/W is excellent for a cooler with two 120 mm fans, with the IceGem 360 sweating to get a tiny better thermal resistance figure of 0.0741 °C/W. 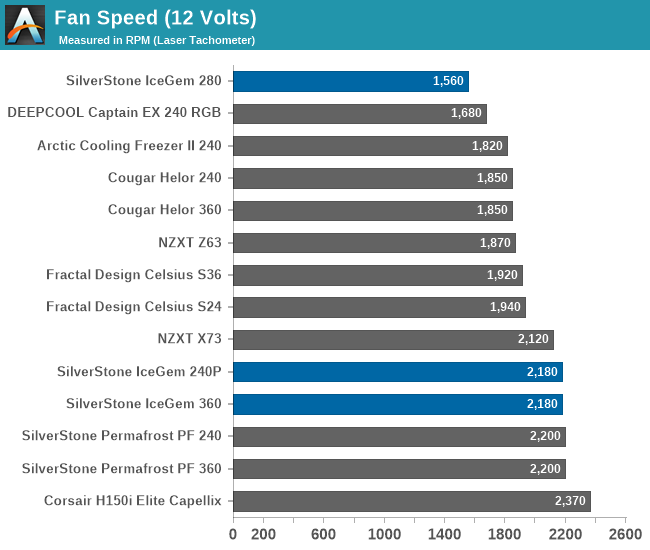 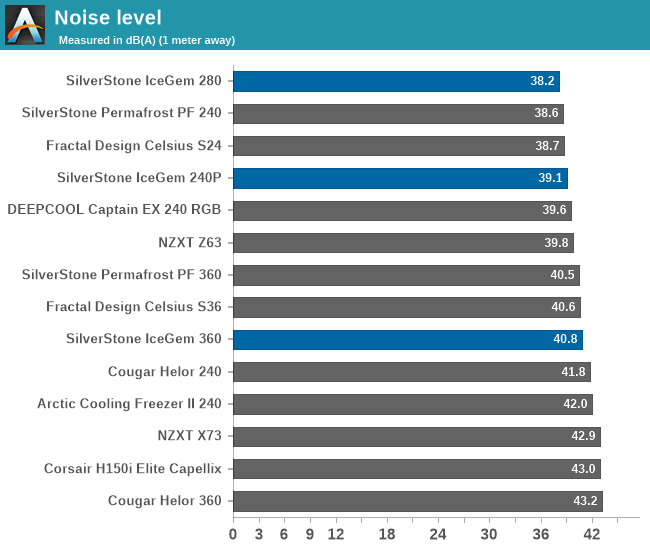 When it comes to acoustics, all of SilverStone’s new AIO coolers do exceptionally well, with low sound pressure levels across the board. What is interesting to note here is the very low sound pressure level of the IceGem 280, which gives the product a significant advantage against other coolers – even against the other two IceGem coolers.

Using a PWM voltage regulator, we reduced the speed of the fans manually down to half their rated speed, which is 1080-1100 RPM for the 120 mm fans and 800-820 RPM for the 140 mm fans. The pump was also connected to the same power source, functioning properly at this low speed setting. 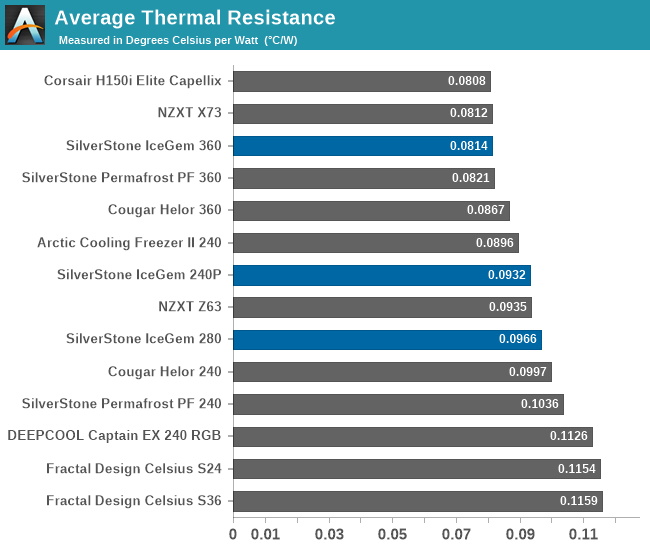 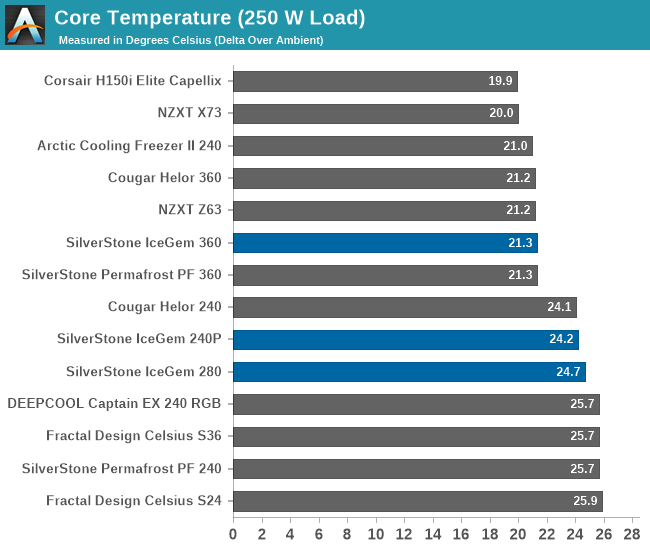 The surprises continue in this test as well, with the IceGem 240P thermally outperforming the larger IceGem 280 even though the fans of the IceGem 280 should be pushing significantly more air through the radiator under these operating conditions. On the other hand, the IceGem 360 significantly outperformed the two smaller IceGem coolers and even the equally sized PermaFrost cooler by a very small margin. 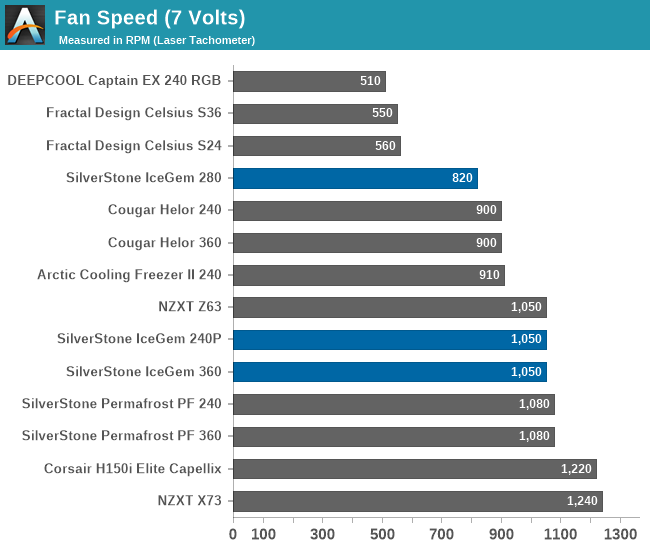 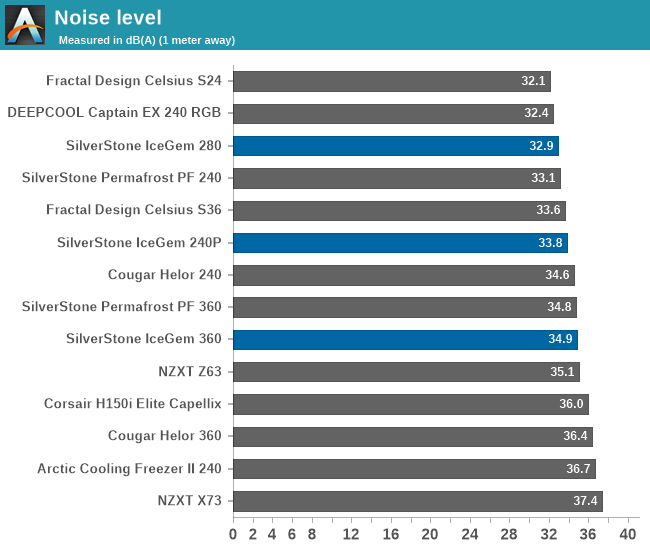 Even with these reduced speeds, the thermal permittance of the IceGem 360 rose only up to 0.0814 °C/W. In combination with the low noise output, that makes the IceGem 360 one of the most efficient coolers that we have ever tested. Although its thermal performance is not as great, we also received impressive sound pressure figures from the IceGem 280, which is nearly dead silent in this test. The IceGem 240P does not stand out in this test but it does perform comparatively well. 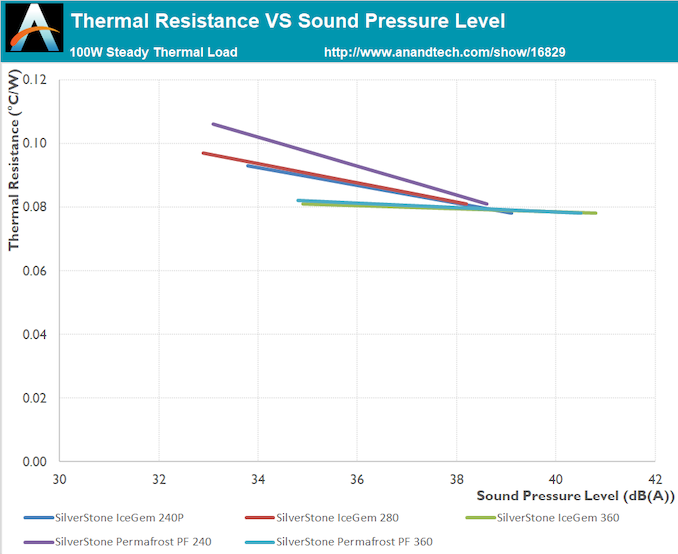 This graph reveals that the IceGem 240P actually performs almost equally well, if not better, than the wider IceGem 280. We did not expect that the increase in the radiator’s thickness would be that beneficial, especially since the greater thickness also increases the airflow resistance of the radiator. We can also see that the IceGem 240P performs significantly better than SilverStone’s own Permafrost 240, which is using a 28 mm thick radiator. The IceGem 360 does outperform the smaller coolers when operating at low fan speeds but its thermal performance does not increase significantly with the fans operating at high speeds, making the cooler noisy for virtually miniscule improvements on the thermal performance.