There's been a lot of focus on how both Intel and AMD are planning for the future in packaging their dies to increase overall performance and mitigate higher manufacturing costs. For AMD, that next step has been V-cache, an additional L3 cache (SRAM) chiplet that's designed to be 3D die stacked on top of an existing Zen 3 chiplet, tripling the total about of L3 cache available. Today, AMD's V-cache technology is finally available to the wider market, as AMD is announcing that their EPYC 7003X "Milan-X" server CPUs have now reached general availability.

As first announced late last year, AMD is bringing its 3D V-Cache technology to the enterprise market through Milan-X, an advanced variant of its current-generation 3rd Gen Milan-based EPYC 7003 processors. AMD is launching four new processors ranging from 16-cores to 64-cores, all of them with Zen 3 cores and 768 MB L3 cache via 3D stacked V-Cache.

AMD's Milan-X processors are an upgraded version of its current 3rd generation Milan-based processors, EPYC 7003. Adding to its preexisting Milan-based EPYC 7003 line-up, which we reviewed back in June last year, the most significant advancement from Milan-X is through its large 768 MB of L3 cache using AMD's 3D V-Cache stacking technology. The AMD 3D V-Cache uses TSMC's N7 process node – the same node Milan's Zen 3 chiplets are built upon – and it measures at 36 mm², with a 64 MiB chip on top of the existing 32 MiB found on the Zen 3 chiplets. 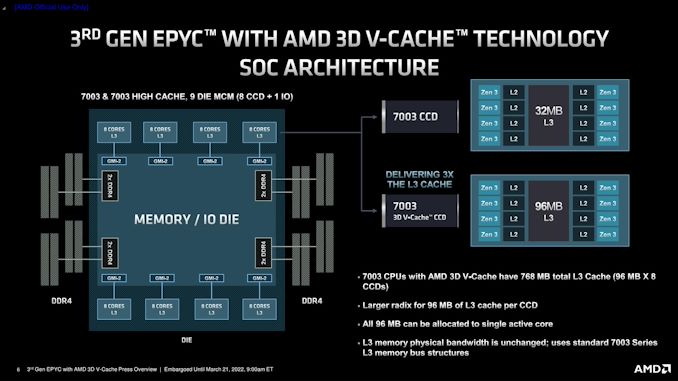 Focusing on the key specifications and technologies, the latest Milan-X AMD EPYC 7003-X processors have 128 available PCIe 4.0 lanes that can be utilized through full-length PCIe 4.0 slots and controllers selection. This is dependent on how motherboard and server vendors want to use them. There are also four memory controllers that are capable of supporting two DIMMs per controller which allows the use of eight-channel DDR4 memory.

The overall chip configuration for Milan-X is a giant, nine chiplet MCM, with eight CCD dies and a large I/O die, and this goes for all of the Milan-X SKUs. Critically, AMD has opted to equip all of their new V-cache EPYC chips with the maximum 768 MB of L3 cache, which in turn means all 8 CCDs must be present, from the top SKU (EPYC 7773X) to the bottom SKU (EPYC 7373X). Instead, AMD will be varying the number of CPU cores enabled in each CCD. Drilling down, each CCD includes 32 MB of L3 cache, with a further 64 MB of 3D V-Cache layered on top for a total of 96 MB of L3 cache per CCD (8 x 96 = 768). 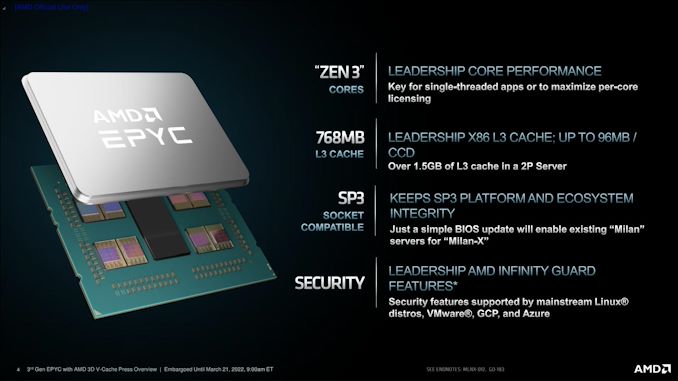 In terms of memory compatibility, nothing has changed from the previous Milan chips. Each EPYC 7003-X chip supports eight DDR4-3200 memory modules per socket, with capacities of up to 4 TB per chip and 8 TB across a 2P system. It's worth noting that the new Milan-X EPYC 7003-X chips share the same SP3 socket as the existing line-up and, as such, are compatible with current LGA 4094 motherboards through a firmware update.

Notable, all of these new Milan-X chips have some kind of clockspeed regression over their regular Milan (max core performance) counterparts. In the case of the 7773X, this is the base clockspeed, while the other SKUs all drop a bit on both base and boost clockspeeds. The drop is necessitated by the V-cache, which at about 26 billion extra transistors for a full Milan-X configuration, eats into the chips' power budget. So with AMD opting to keep TDPs consistent, clockspeeds have been dialed down a bit to compensate. As always, AMD's CPUs will run as fast as heat and TDP headroom allows, but the V-cache equipped chips are going to reach those limits a bit sooner.

AMD's target market for the new Milan-X chips is customers who need to maximize per-core performance; specifically, the subset of workloads that benefit from the extra cache. This is why the Milan-X chips aren't replacing the EPYC 70F3 chips entirely, as not all workloads are going to respond to the extra cache. So both lineups will be sharing the top spot as AMD's fastest-per-core EPYC SKUs. 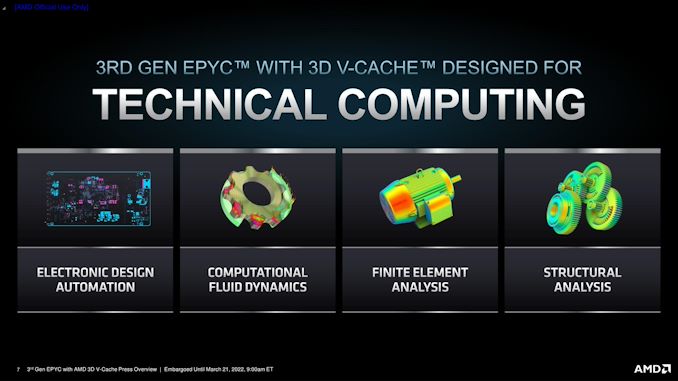 For their part, AMD is particularly pitching the new chips at the CAD/CAM market, for tasks such as finite element analysis and electronic design automation. According to the company, they've seen upwards of a 66% increase in RTL verification speeds on Synopsys' VCS verification software in an apples-to-apples comparison between Milan processors with and without V-cache. As with other chips that incorporate larger caches, the greatest benefits are going to be found in workloads that spill out of contemporary-sized caches, but will neatly fit into the larger cache. Minimizing expensive trips to main memory means that the CPU cores can remain working that much more often. 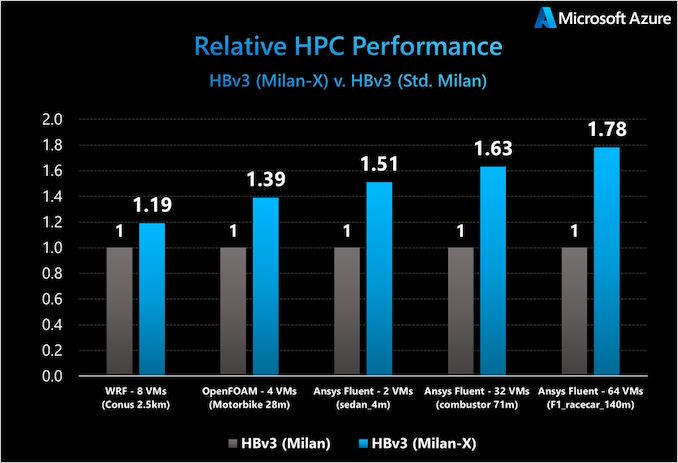 Microsoft found something similar last year, when they unveiled a public preview of its Azure HBv3 virtual machines back in November. At the time, the company published some performance figures from its in-house testing, mainly on workloads associated with HPC. Comparing Milan-X directly to Milan, Microsoft used data from both EPYC 7003 and EPYC 7003-X inside its HBv3 VM platforms. It's also worth noting that the testing was done on dual-socket systems, as all of the EPYC 7003-X processors announced today could be used in both 1P and 2P deployments.

Performance data published by Microsoft Azure is encouraging and using its in-house testing, it looks as though the extra L3 cache is playing a big part. In Computational Fluid Dynamics, it was noted that there was a better speed up with fewer elements, so that has to be taken into consideration. Microsoft stated that with its current HBv3 series, its customers can expect maximum gains of up to 80% performance in Computational Fluid Dynamics compared to the previous HBv3 VM systems with Milan.

Given the large order sizes required, the overall retail price is likely to be slightly higher for one unit. Though with the majority of AMD's customers being server and cloud providers, no doubt AMD will have some customers buying in bulk. Many of AMD's major server OEM partners are also slated to begin offering systems using the new chips, including Dell, Supermicro, Lenovo, and HPE.

Finally, consumers will get their own chance to get their hands on some AMD V-cache enabled CPUs next month, when AMD's second V-cache product, the Ryzen 7 5800X3D, is released. The desktop processor is based around a single CCD with a whopping 96 MB of L3 cache available, all of which contrasts nicely with the much bigger EPYC chips.