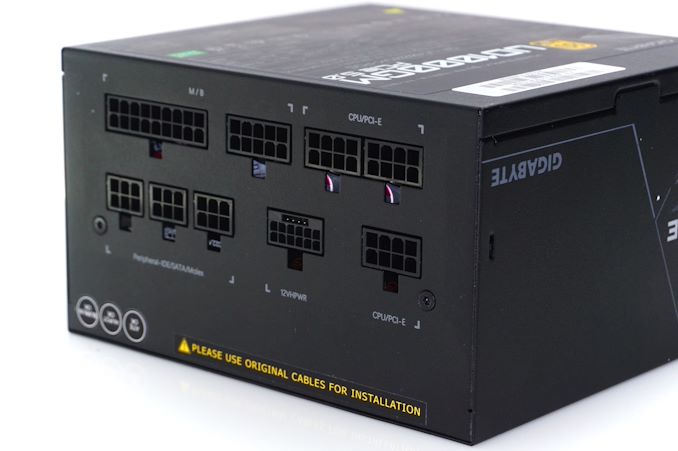 GIGABYTE is a company renowned for its extensive range of motherboards and graphics cards, myriads of which passed through our testing labs. Regardless, the massive volumes at which GIGABYTE is producing motherboards and graphics cards has not keep the company from making diversification efforts towards virtually every segment of the PC market, ranging from laptops and mini PCs to gaming keyboards and chairs.

GIGABYTE is not a stranger in the power and cooling business, shyly marketing their first few PC PSUs over fifteen years ago. The company’s PSU releases were few and far between, with GIGABYTE grabbing a little piece of the market share but never making a significant effort to overwhelm the competition.

In today’s review, we are having a look at the GIGABYTE UD1000GM PG5, a powerful 80Plus Gold certified PC PSU. What makes the UD1000GM PG5 stand out from the crowd is the new 12+4 pin connector (12VHPWR connector), which is required by the ATX 3.0 standard. GIGABYTE does not claim that the UD1000GM PG5 is ATX 3.0 compliant, but having the 12VHPWR connector allows for partial compatibility – and conceivably future-proofs the PSU against upcoming graphics card releases.

GIGABYTE supplies the UD1000GM PG5 in an aesthetically captivating but relatively small cardboard box, hinting at the compact dimensions of the PSU in relation to its power output. Inside the box, the PSU is encased inside thin packaging foam that offers partial protection from shipping damage. 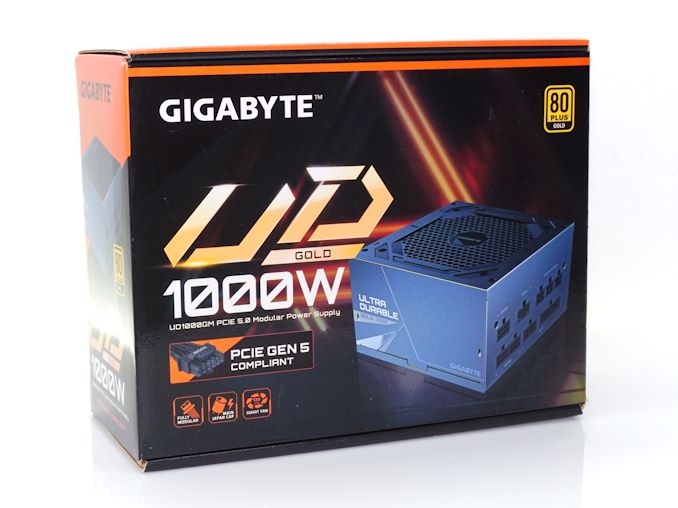 There are virtually no items bundled alongside with the UD1000GM PG5, with GIGABYTE sticking to the absolute basics. Only four typical mounting screws and an AC power cable can be found inside the packaging. 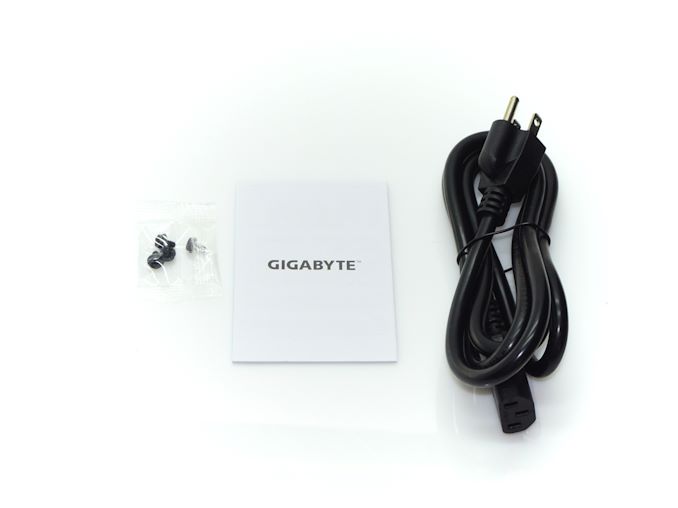 The new PCIe 5.0 cable is the highlight of this PSU. This connector is required by the new ATX 3.0 standard for any PC PSU that has an output greater than 450 Watts. Of course, the connector alone does not make the UD1000GM PG5 ATX 3.0 compliant, as the new standard brings numerous and significant changes to the market. However, it would help the UD1000GM PG5 to last longer.

Physically, these 16-pin connectors are not significantly larger than legacy 6/8-pin PCIe connectors, but they feature twelve pins plus four sensing pins. Out of the four sensing pins, two are mandatory and two are optional. The mandatory pins signal to the PCIe card the maximum power that the connector can handle, allowing the card to regulate its power draw. That makes the use of adapters on older PSUs tricky, as there is no way for the PSU to signal the card and their cables cannot handle a high current draw, so the preset output cannot be anywhere near 600 Watts. The only window for safely using adapters limits a passive adapter’s output to the minimum allowed by the new standard (150 Watts) or will require active adapters with multiple legacy connector inputs. 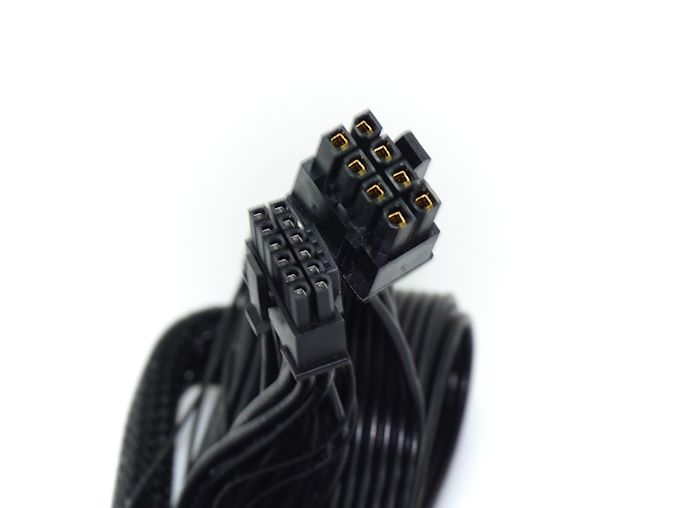 These new 12VHPWR connectors can deliver up to 600 Watts each. Depending on the PSU’s capability, the maximum wattage that it can provide is printed on the connector itself. The connector of the UD1000GM PG5 states that it can handle 600 Watts continuous, which is the maximum dictated by the ATX 3.0 standard.

The GIGABYTE UD1000GM PG5 PSU is very compact for a 1 kW unit. Measuring just 86 mm × 150 mm × 140 mm (H × W × D), the UD1000GM PG5 manages to fully comply with ATX standard dimensional specifications, making it compatible with virtually any ATX-compliant case. The steel chassis is sprayed with a satin black paint and several parts of it have been embossed to create a futuristic design. The fan’s finger guard also is part of the chassis itself. 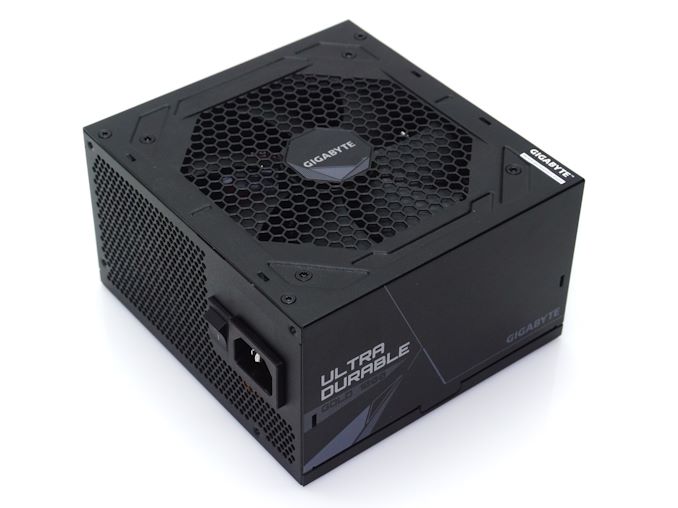 GIGABYTE moved the sticker with the unit’s certifications and specifications at the top of the chassis, leaving the sides to feature an artistic design. The sticker is facing sideways, with the designer clearly thinking that this orientation would make reading it from a windowed side panel easier. 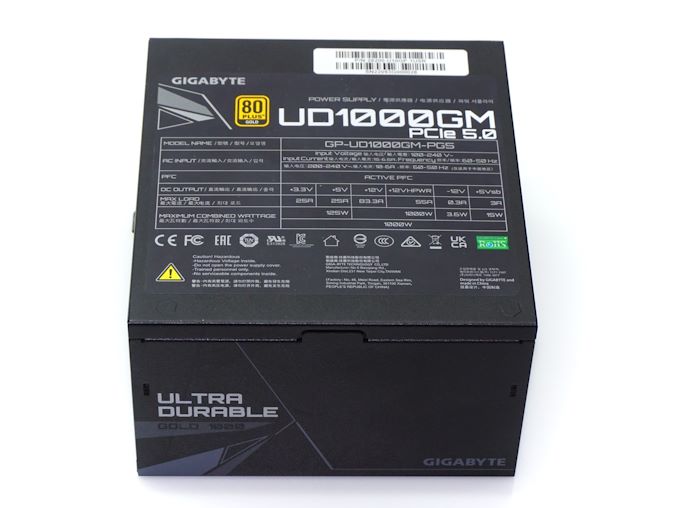 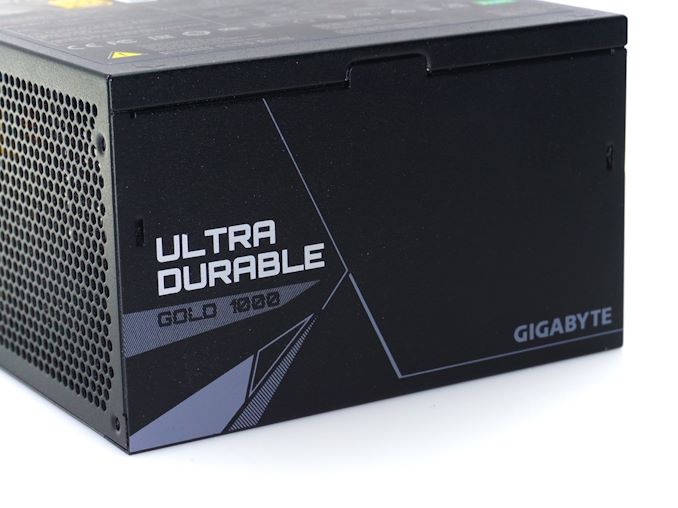 A typical on/off switch can be seen at the rear side of the unit, beside the power connector. There is evidence that a sticker was (or should have been) right under the power connector but we found nothing there. Most of the front side is covered by the connectors for the modular cables, with GIGABYTE strongly insisting that users should use only the provided cables for this PSU. 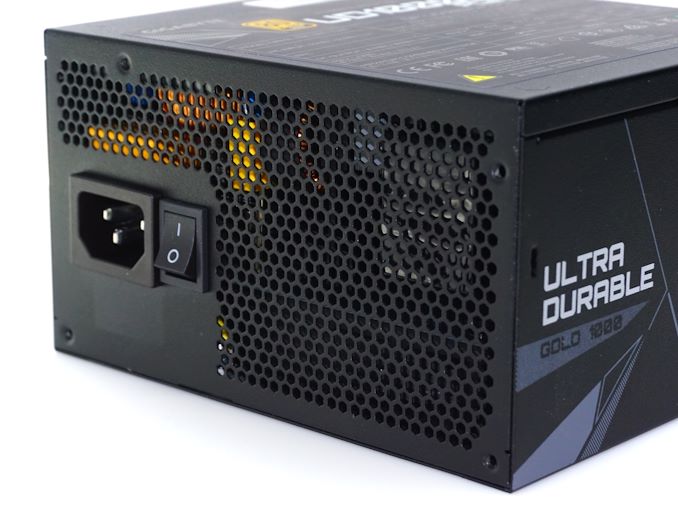 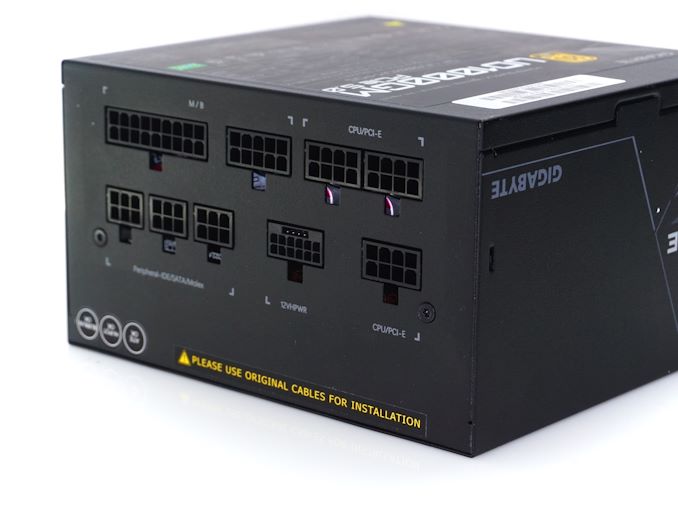 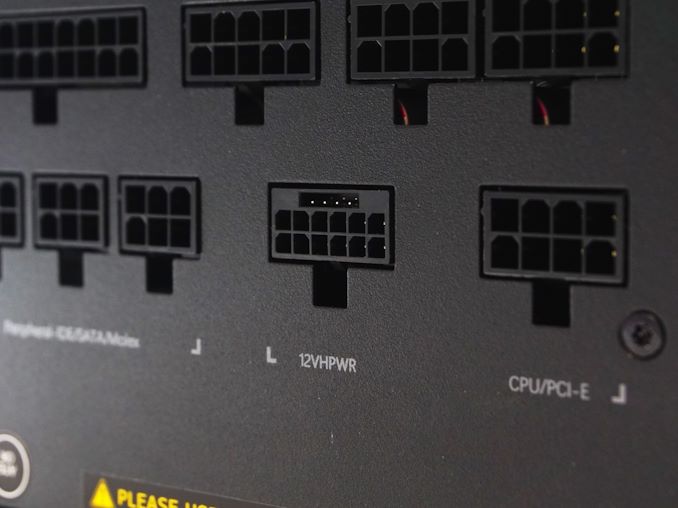 GIGABYTE entrusted the cooling of the UD1200GM PG5 to Jamicon, a sister company of the better-known Teapo. The Taiwanese fan manufacturer is not popular amongst PSU designers but their products are considered to be of above-average quality. The KF1225H1H 120 mm fan inside the UD1200GM PG5 is a rather basic model, with a rifle-bearing engine. This fan feels like an odd choice for a PSU with a 10-year long warranty and can incite a lot of RMA requests after that many years. 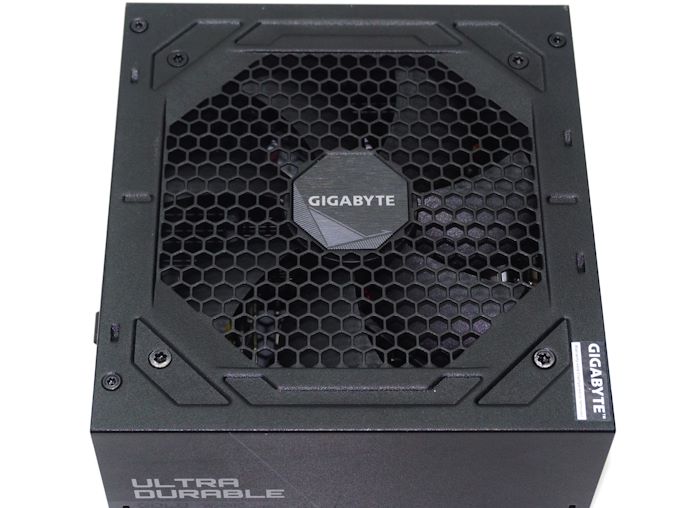 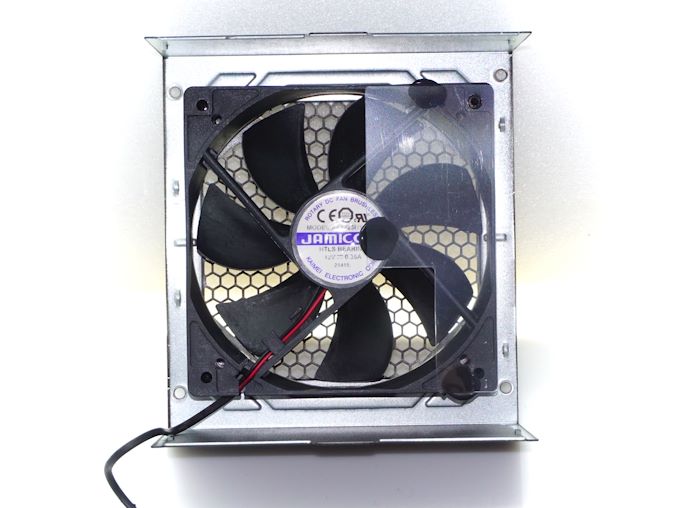 Both the OEM and the platform of the GIGABYTE UD1200GM PG5 are completely new to us. GIGABYTE entrusted the manufacturing of this PSU to Xiamen Metrotec Electronic Industry Co (or MEIC), a Chinese OEM whose products we have not seen before. Having been around since 2007, MEIC is not a new company but they have been mostly active with producing smaller products, such as chargers and power banks. 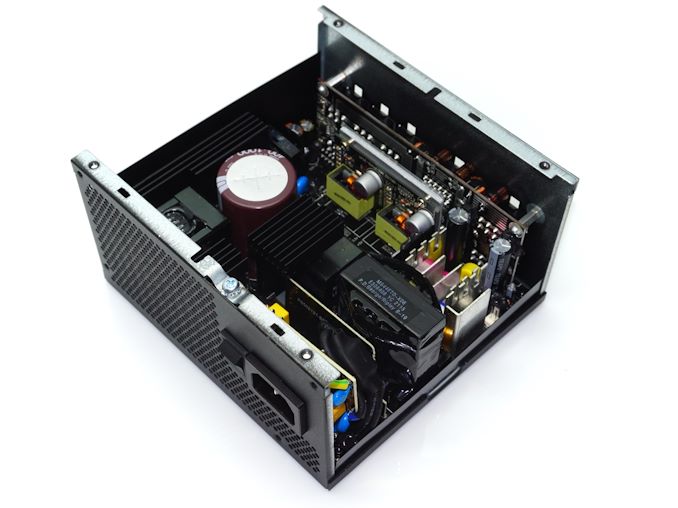 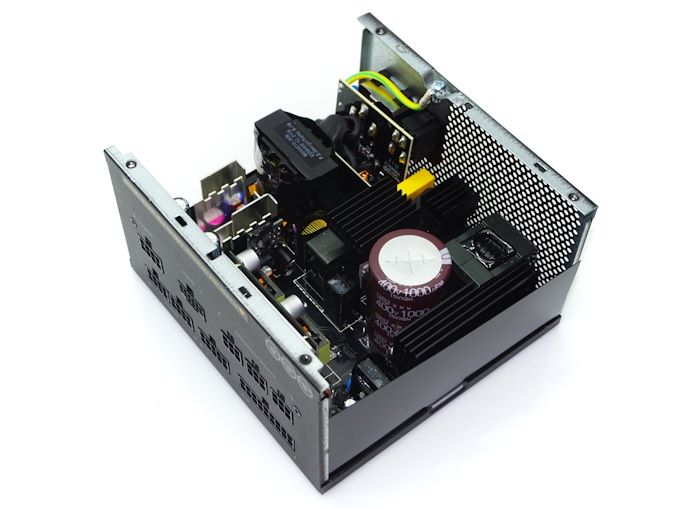 The filtering stage of the GIGABYTE UD1200GM PG5 is textbook, with a total of four Y capacitors, two X capacitors, and two filtering inductors leading to a dual input rectifying bridge configuration. The bridges are placed on a sizable heatsink. The passive APFC components are a colossal 400V/1000μF APFC capacitor made by Nippon Chemi-Con and an equally massive filtering coil. The inrush current of this configuration will be horrendous and can lead to circuit breaker tripping if Type B MCBs or low-rating MCBs are in use. The active APFC components are on a long heatsink right across the edge of the PCB. 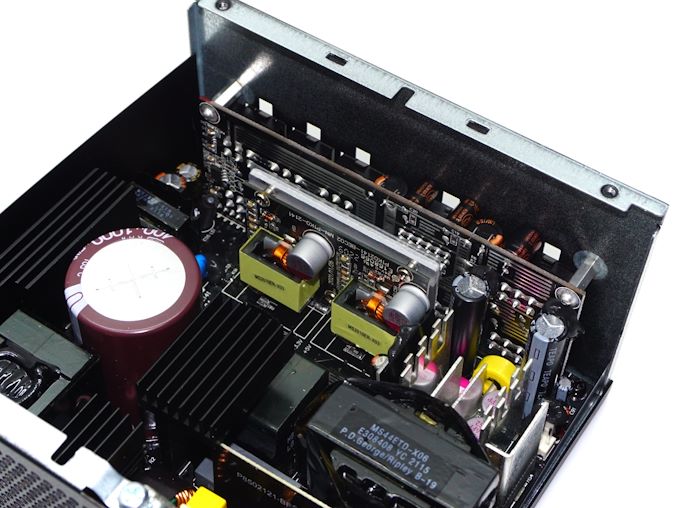 Two transistors form a typical half-bridge inversion topology at the primary side of the unit, while six MOSFETs generate the 12V line at the secondary side of the transformer. The 3.3V and 5V lines are generated via the DC-to-DC conversion circuits. This is a very typical configuration for an 80Plus Gold certified unit. All of the secondary capacitors, electrolytic and polymer alike, are provided by Teapo and Lelon, both Taiwanese manufacturers. Teapo is a manufacturer we frequently see the products of in mid-tier products. Lelon is not as known as Teapo but their products are of about equal quality. Regardless, enthusiasts would probably hope to find something better inside a high-tier PSU with such a long warranty. 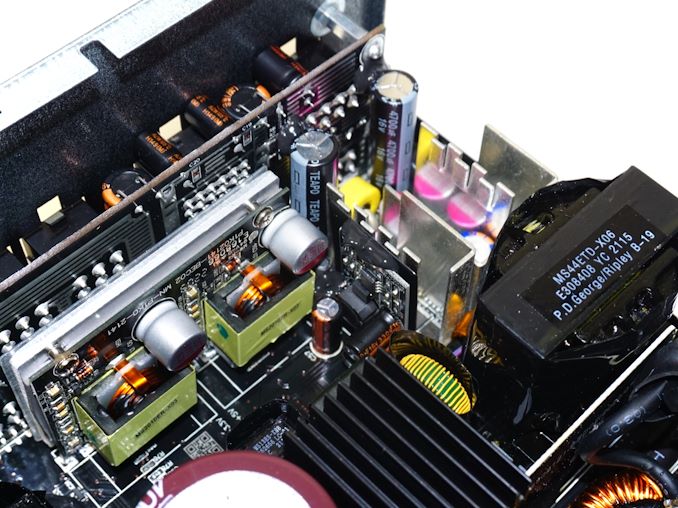