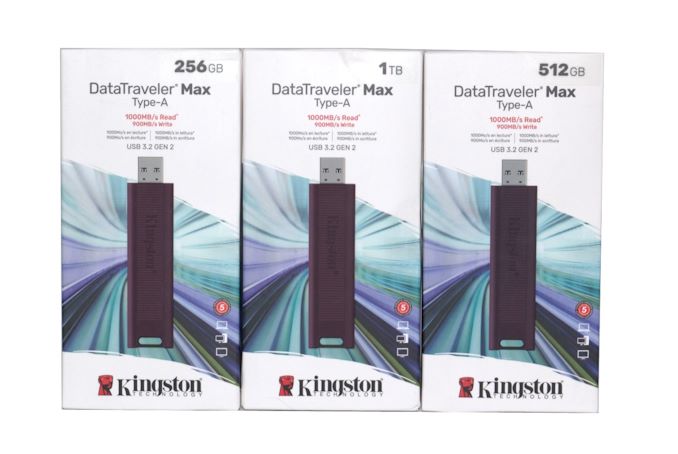 Kingston's new products in the portable flash-based external storage space have met with good market reception over the last year or so. Two products in particular - the Kingston XS2000 and the DataTraveler Max - continue to remain unique in the market with no other comparable products being widely available.

The XS2000 remains the only portable SSD with a USB 3.2 Gen 2x2 (20Gbps) interface equipped with a native flash controller (that brings cost and power-efficiency benefits over bridge-based solutions). The Kingston DataTraveler Max USB flash drive (UFD) - another product with a native flash controller - was introduced in August 2021. It advertised 1GBps-class speeds, low power consumption, and a Type-C interface - all in a thumb drive form-factor. Today, Kingston is expanding the DT Max series with three new drives - all sporting a USB 3.2 Gen 2 Type-A interface.

This review digs into all the three capacity points - 256GB, 512GB, and 1TB - in the new DTMAXA series sampled by Kingston. We'll be taking a look at the performance, power efficiency, and value proposition of the DTMAXA. We've also cracked the drive open in order to determine differences between the hardware in the original DT Max and the new DTMAXA products.

Bus-powered external storage devices have grown both in storage capacity and speeds over the last decade. Thanks to rapid advancements in flash technology (including the advent of 3D NAND and NVMe) as well as faster host interfaces (such as Thunderbolt 3 and USB 3.2 Gen 2x2), the market has seen the introduction of palm-sized flash-based storage devices capable of delivering 2GBps+ speeds.

The thumb drive form factor is attractive for multiple reasons - there is no separate cable to carry around, and the casing can be designed to include a keyring loop for portability. Vendors such as Corsair and Mushkin briefly experimented with SATA SSDs behind a USB bridge chip, but the thermal solution and size made the UFDs slightly unwieldy. The introduction of high-performance native UFD controllers last year from Phison and Silicon Motion has made this category viable again.

Kingston's DT Max series retains the traditional DataTraveler thumb drive form-factor. However, it takes full advantage of the USB 3.2 Gen 2 connector by promising 1GBps speeds. Available in three capacities - 256GB, 512GB, and 1TB, and in both Type-C and Type-A connector versions, Kingston says that they can deliver those high speeds across all six SKUs. We had done a thorough investigation into the 1TB capacity point of the DT Max Type-C version last year. Kingston claims that the new Type-A additions to the DT Max series are the same as the corresponding Type-C ones in terms of performance, capacity, and form factor, except for minor changes to the color and Type-A connector. We set out to confirm those claims. 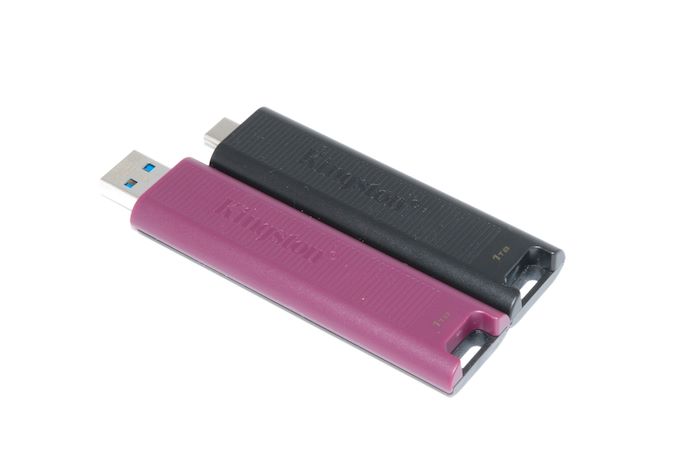 The new Type-A series shares the same sliding cap design to protect the connector. The blue LED power indicator and keyring loop are retained. The new connector makes it necessary to slightly lengthen the UFD and also adds a couple of grams to the weight - specifics in the table at the end of this section.

The teardown process was similar to that of the Type-C version. With no screws in the design, everything is held by small plastic tabs. Other than the connector change, the only difference we could spot on the board was the updated flash package part number. While last year's Type-C version used the FPxxx08UCM1-7D (with Micron's 96L 3D TLC), the new DTMAX series uses the FBxxx08UCT1-AF (with Toshiba's BiCS5 112L 3D TLC). It is not clear whether newer production runs of the Type-C versions have also shifted the flash parts - we can only comment on our review samples. Kingston continues to retain the Silicon Motion SM2320 native UFD controller. 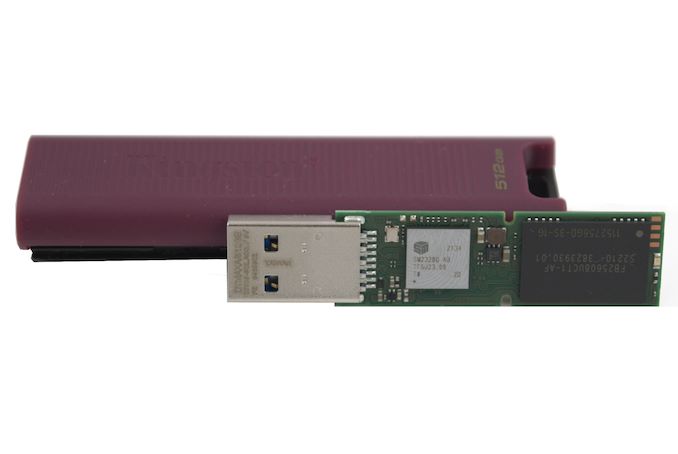 Since the publication of our DataTraveler Max Type-C review, we have processed a number of different drives with our updated testbed and test suite. For comparison purposes, we have chosen a number of 1TB and smaller-sized direct-attached storage (DAS) devices.

CrystalDiskInfo provides a quick overview of the capabilities of the internal storage device. Since the program handles each bridge chip / controller differently, and the SM2320 has not yet found its way into the tracked controllers, many of the entries are marked as vendor-specific, and some of the capabilities (such as the interface) are deciphered incorrectly. The temperature monitoring worked well, though - just like it did for the Type-C version.

The table below presents a comparative view of the specifications of the different storage bridges presented in this review.

Prior to looking at the benchmark numbers, power consumption, and thermal solution effectiveness, a description of the testbed setup and evaluation methodology is provided.

The most attractive aspect of the Quartz Canyon NUC is the presence of two PCIe slots (electrically, x16 and x4) for add-in cards. In the absence of a discrete GPU - for which there is no need in a DAS testbed - both slots are available. In fact, we also added a spare SanDisk Extreme PRO M.2 NVMe SSD to the CPU direct-attached M.2 22110 slot in the baseboard in order to avoid DMI bottlenecks when evaluating Thunderbolt 3 devices. This still allows for two add-in cards operating at x8 (x16 electrical) and x4 (x4 electrical). Since the Quartz Canyon NUC doesn't have a native USB 3.2 Gen 2x2 port, Silverstone's SST-ECU06 add-in card was installed in the x4 slot. All non-Thunderbolt devices are tested using the Type-C port enabled by the SST-ECU06.

The specifications of the testbed are summarized in the table below:

The testbed hardware is only one segment of the evaluation. Over the last few years, the typical direct-attached storage workloads for memory cards have also evolved. High bit-rate 4K videos at 60fps have become quite common, and 8K videos are starting to make an appearance. Game install sizes have also grown steadily even in portable game consoles, thanks to high resolution textures and artwork. Keeping these in mind, our evaluation scheme for portable SSDs and UFDs involves multiple workloads which are described in detail in the corresponding sections.

In the next section, we have an overview of the performance of the Kingston DTMAXA drives in these benchmarks. Prior to providing concluding remarks, we have some observations on the UFD's power consumption numbers and thermal solution also.