Samsung on Friday broke ground for a new semiconductor research and development complex which will design new fabrication processes for memory and logic, as well as conduct fundamental research of next-generation technologies and materials. The company plans to invest KRW 20 trillion ($15 billion) in the new R&D facility by 2028.

To make more competitive logic and memory chips, companies like Samsung have to innovate across many directions, which includes new materials (for fins, for gates, for contacts, for dielectrics, just to name a few), transistor architecture, manufacturing technologies, and design of actual devices. In many cases, companies physically separate fundamental research and development of actual process technologies, but the new R&D center will conduct operations across virtually all fronts except device design.

The new facility will handle advanced research on next-generation transistors and fabrication processes for memory and logic chips as well as seek for new technologies to 'overcome the limits of semiconductor scaling.' Essentially, this means researching new materials and manufacturing techniques as well as developing actual production nodes. Given that all of these R&D operations require large scale nowadays, it is not particularly surprising that it will require Samsung to invest $15 billion in the center over the next six years.

Spreading fundamental research and applied development operations across different locations helps with bringing new talent onboard (e.g., people with academia background may be unwilling to relocate too far away from their current homes), but also creates discrepancy within one company as feedback from different departments gets slower. Ideally, scientists doing pathfinding and research, developers designing new production nodes, fab engineers, and device developers should work together on a site and get feedback from each other. But while Samsung's new R&D hub is not meant for this, it will still bring scientists and node developers together, which is a big deal.

The new R&D center will be located at Samsung's campus near Giheung, South Korea, and will be occupy around 109,000 m2 (~20 football fields). To put the number into a more relevant context, Apple's corporate headquarters — Apple Park — occupies around 259,000 m2 and houses over 12,000 of employees that do everything from management to research to product development.

The new R&D facility will work in concert with Samsung's existing R&D line in Hwaseong (which works on memory, system LSI, and foundry technologies) and the company's production complex in Pyeongtaek that can produce both DRAM (using 10nm-class technologies) and logic chips (using 5nm-class and thinner nodes). It will also be Samsung's 12th semiconductor R&D center. Meanwhile, this will be the company's first semiconductor R&D facility of this scale. 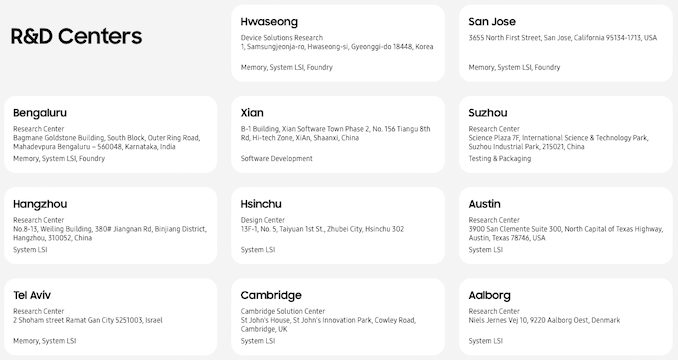 Three years ago Samsung announced plans to spend KRW 133 trillion ($100 billion today, $115 billion in 2019) on semiconductor R&D by 2030. The company allocated KRW 73 trillion ($54.6 billion) on R&D operations in South Korea, so investing $15 billion in a single research and development facility aligns perfectly with this plan.

"Our new state-of-the-art R&D complex will become a hub for innovation where the best research talent from around the world can come and grow together," said President Kye Hyun Kyung, who also heads the Device Solutions (DS) Division. "We expect this new beginning will lay the foundation for sustainable growth of our semiconductor business."