Infrant has put their desktop ReadyNAS model through three generations of changes with the original being the ReadyNAS 600. The most noticeable difference of the NV model from the 600 and X6 is the smaller form factor. The new ReadyNAS NV model is now half the size of the original ReadyNAS, which gives it a desk space-saving footprint. The look has also been improved with reflective mirror panels at the head and foot of the front bezel and a plastic door, which features a holey grating for airflow. 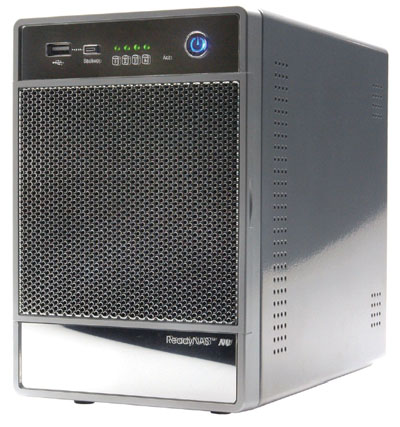 The head of the front bezel features, from left to right, a USB 2.0 port to which to connect digital cameras or personal media devices, an instant backup button (which backs up data from the NV’s “backup” share to a separate USB device), 4 HDD activity LEDs with icons to show their designated drives, an activity light labeled “ACT”, and finally, the power button, which is about a half an inch in diameter and features a blue LED lit power icon.

The ReadyNAS NV model features hot swappable drive bays that can be found by swinging the grated door out from the right to the left. We now see four vertically mounted hot swap bays with the drive trays in place. To remove the drive tray, we push forward on the dark gray plastic at the bottom of the chassis to snap open the light gray handle, which allows us to pull the drive tray out of the bay from the front to install the hard disk drives. Since these are hot swap bays, there is no wiring needed like there was with the X6 and 600 series.

The back of the ReadyNAS NV features a very simple set of connections. The power connector is located at the bottom left, which is a standard 3-prong computer plug making it simple to swap out the cable for a new one if something were to happen to the original. At the top right of the backside of the NV, there are 2 USB 2.0 ports and a 10/100/1000Mbps Ethernet port aligned vertical in that order.


Beauty on the Inside

The ReadyNAS X6 and 600 series devices in version A used a motherboard that featured upgradeable DDR SODIMM RAM and a CompactFlash card, which held the RAIDiator operating system and the FACTORY reset backup information. The NV series still has the upgradeable RAM starting at 256MB, but features 64MB of onboard flash to accommodate the OS.

The guts of the ReadyNAS NV include the IT3107 network storage processor (NSP), which is a 32-bit RISC processor running at 280MHz. It features the X-RAID technology, which allows us to increase the size of RAID volumes on-the-fly without the need to reformat or rebuild any arrays as if we were using enterprise class hardware. The IT3107 allows up to 4 SATA channels, which can be configured in RAID 0/1 as well as RAID 0/1/5 and X-RAID. Before receiving the newer NV model, which Infrant sent as a bare unit without hard disk drives, they informed us that we could use our RAID set from the X6 in the NV. This did not surprise us, since the platforms are almost completely identical, but it did give us goose bumps to be assured that we wouldn’t have to go through the RAID rebuild process.

Some of the other features that stand out as a desktop/home storage device include wireless networking capabilities, which allow us to plug in a wireless dongle to the Ethernet port and be able to network to any standard, a/b/g, so long as your current infrastructure supports it. This is especially useful when the NAS needs to be located elsewhere in the house or office as a central file or media server where no wired Ethernet connections are available.

Speaking of media, the ReadyNAS devices all carry UPnP support to interface with set top media boxes to stream audio, video, and pictures from the NAS to a TV anywhere in the house. Additionally, the ReadyNAS devices have printer network-ability and can also download images automatically off of a digital camera or download audio from a personal audio device without any other human interaction besides plugging the devices into the USB ports.

Another networking feature that makes the ReadyNAS line easy to use is the DHCP and static IP capabilities. Not only will the device accept an IP given out by another DHCP server, but it will also act as a DHCP server if a PC is directly connected to its Ethernet port and is, itself, set to accept dynamic IP addresses. One thing to note is that if a static IP is configured on the NV, be prepared to pay the consequences and do a FACTORY reset if it is forgotten, since there is no quick recovery option.