Okay, I lied a little.  Biostar announce their new tech as ‘BIO-unlocKING’, a feature on their latest 8xx series motherboard to unlock the quad core Thuban based processors (such as the Phenom II X4 960T) to their hexacore variants.  Biostar cover themselves by noting that not all quad core Thubans will unlock.  This feature will also help with unlockable dual core chips.

However, this is their new TA890FXE board.  Premiered at CeBIT earlier this year and upgraded since with a new (and better) color scheme, the ubiquitous combination of the 890FX and SB850 chipset will feature a 5+1 phase VRM, four PCI-E x 16 2.0 slots (x16, x16, x4, x1) for quad CrossfireX support, SATA 6Gb/s, Realtek Gigabit Ethernet, e-SATA, 7.1 Channel audio, support for dual channel DDR3 and 6 USB2.0 slots.

We're not entirely sure which segments of the market Biostar are aiming the board at, but the absence of USB3.0 may cause people upgrading to look elsewhere.  The lack of VRMs will discourage overclockers.  Gamers with two card CrossfireX setups will be amazed to find the layout feature 2 PCI slots at the bottom.  Ideally, Biostar should have spaced the PCI-E slots out, to help people using dual CrossfireX setups to deal with temperatures.

I can only hope the lack of USB3.0 and so few VRMs will result in Biostar marketing this as a low end 890FX board.  Maybe a board for folders and BOINC crunchers?  Drop in an unlockable quad core Thuban and some GPUs, and they may be onto a winner if the price is right.  It’s just a shame about that PCI-E spacing... 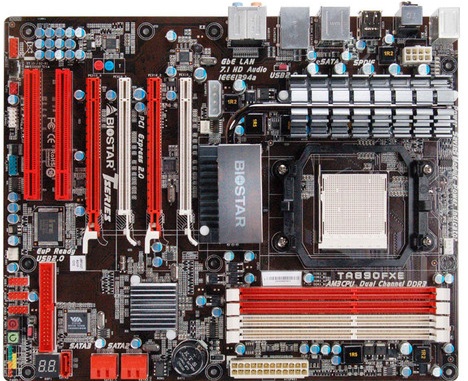